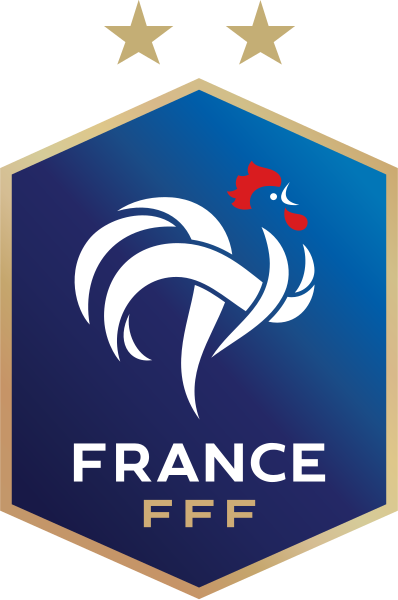 The French football team, created in 1904, is the national team that represents France in international men's football competitions, under the aegis of the French Football Federation (FFF). It selects the best French players. The latter, making up this team, are traditionally called Les Tricolores or Les Bleus. Nowadays, it is this last name which is the most used. Until the 1980s, the record of the French team remained blank, with the best result being a third place obtained at the 1958 World Cup. After a memorable semi-final at the 1982 World Cup, lost against Germany in shooting, she won the 1984 European Championship at home against Spain (2-0), as well as the Intercontinental Nations Cup in 1985. The team embellished its record at the end of the 20th century. Host country of the 1998 World Cup, France won the competition for the first time by beating Brazil in the final (3-0) on July 12, 1998 at the Stade de France. With an identical formation, she won in the wake of Euro 2000 thanks to her victory over Italy in the final (2-1, on a golden goal from David Trezeguet), on July 2, 2000 at the Kuip de Rotterdam (first World-Euro double achieved in this direction). The Blues won two more Confederations Cups in 2001 and 2003. They occupied first place in the FIFA world rankings from May 2001 to June 2002. They reached the final of the 2006 World Cup in Germany, which they lost on penalties against Italy. At Euro 2016 in France, they eliminated Germany for the first time in 58 years in international competition and played in the final in which they were beaten 1-0 a. p. by Portugal. Finally the Blues won their second world title by winning the 2018 World Cup final in front of Croatia (4-2), on July 15, 2018 at the Luzhniki stadium in Moscow. France is then the only team to have played three World Cup finals and to have won two in the last six editions, but also five major finals (World, Euro) in twenty years for three victories. France is the first selection to have won all international competitions: World Cup (1998 and 2018), Confederations Cup (2001, 2003), Olympic Games (1984), its continental championship (1984, 2000). This performance was matched by Argentina in 2004 and Brazil, at the end of the Rio 2016 Games. In 2021, it added the League of Nations to its list, thus becoming the first European team to have won all of these trophies. Since 1904, the French team has been marked by several generations of talented footballers. These obtained their best results, first led by the emblematic players that were Raymond Kopa from 1952 to 1962, Michel Platini from 1976 to 1987 and Zinédine Zidane between 1994 and 2006. In 2018, she is a young woman. generation (25 years old on average), nicknamed "Griezmann generation", including in its ranks Kylian Mbappé, born in 1998, the youngest French scorer in the World Cup and the second youngest player after Pelé to score in the final, which brings France its second star. The captain is then the goalkeeper Hugo Lloris, record holder of captains in blue. In addition, Didier Deschamps, captain of the Blues during victories at the 1998 World Cup and at Euro 2000, has held the post of coach since 2012, becoming after Mário Zagallo and Franz Beckenbauer the third man to win the World Cup as player then as a coach. The French team thus reached first place in the FIFA world ranking on August 16, 2018. The Gallic rooster is the symbol of the team and its colors are those of the national flag, namely

INSERT INTO `wiki_article`(`id`, `article_id`, `title`, `article`, `img_url`) VALUES ('NULL()','Équipe_de_France_de_football','French football team','The Gallic rooster is the symbol of the team and its colors are those of the national flag, namely','https://upload.wikimedia.org/wikipedia/fr/thumb/4/43/Logo_%C3%89quipe_France_Football_2018.svg/langfr-398px-Logo_%C3%89quipe_France_Football_2018.svg.png')