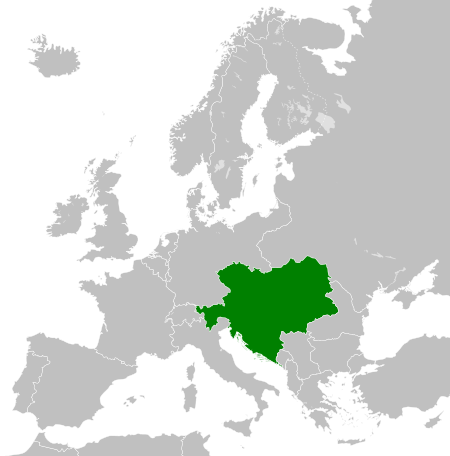 Austria-Hungary (in German: Österreich-Ungarn, in Hungarian: Ausztria-Magyarország), in usual long form the Austro-Hungarian Empire (in German: Österreichisch-Ungarische Monarchie, in Hungarian: Osztrák-Magyar Monarchia), is the former union of two Central European states created by the transformation into a "dual monarchy" of the Austrian Empire (itself bringing together from 1804 the states ruled by the Habsburgs following the disappearance of the Holy Roman Empire). Austria-Hungary existed from 1867 to 1918. Also called the "Danubian Monarchy", Austria-Hungary consists of the real union,,,,, of two states, contiguous and equal, united by the House of Habsburg-Lorraine and bound by a "compromise" (in German: Ausgleich; in Hungarian: kiegyezés): the kingdoms and countries represented at the Diet of the Empire, called Cisleithania, including in particular the Archduchy of Austria, the kingdoms of Bohemia and Galicia; the countries of the Crown of Saint Stephen, called Transleithania, including the kingdoms of Hungary and Croatia-Slavonia. Until 1907, a customs union completes the real union. In 1908, Austria-Hungary annexed Bosnia-Herzegovina, which it had occupied and administered since 1878 but which had nominally remained under Ottoman sovereignty. The political constitution of Austria-Hungary follows the exclusion of the emperors of Austria from their traditional areas of influence: Italy (1860) then Germany (1866). The project of François-Joseph I then consists in consolidating his base by associating the Hungarian elites with power. This compromise was accepted by the Hungarian nobility because it perpetuated most of its feudal privileges instituted by the Golden Bull of King Andrew II in 1222. In 1867, François-Joseph, already Emperor of Austria, was crowned King of Hungary in Budapest. A conservative but pragmatic autocrat, he relied on the cohesive factors of the monarchy and its bureaucracy, the Catholic Church, the aristocracy and the army. His grand-nephew succeeded him in 1916 under the names of Charles I of Austria and Charles IV of Hungary. The Habsburg Empire thus became a "dual monarchy", an expression reserved for Austria-Hungary. The two-headed eagle, a symbol long before the constitution, suits him perfectly. The official adjectives were: “imperial and royal” (“K. und K.”: Kaiserlich und Königlich) for common services (army, finance, diplomacy): the KuK Marine is the navy and the KuK Armee the common component of the Austrian land forces. Hungarian; “imperial-royal” for the services specific to “Cisleithania” whose sovereign is emperor of Austria, king of Bohemia and Moravia, of Galicia and Lodomérie, duke or count of the other hereditary territories of the Habsburgs; "royal" for the services specific to "Transleithania" where the sovereign reigns as king of Hungary and Croatia. This political compromise with the Hungarian nobility harms the interests of the other peoples of the "dual monarchy", Slavs (Czechs, Slovaks, Poles, Ukrainians, Slovenes, Croats, Serbs) or Latins (Italians, Romanians). During the defeat at the end of the First World War and in the name of the "right of peoples to self-determination", the representative assemblies of these peoples, constituted in December 1918, proclaimed, as well as moreover that the National Council of Hungarians, their separation from the “dual monarchy”. This process resulted in the replacement of the Austro-Hungarian Empire by seven “nation states”. Some are newly independent, thus going well beyond the old claims of Austroslavism, which remained unsatisfied: these are Czechoslovakia and the Kingdom of Serbs, Croats and Slovenes, future Yugoslavia, formed by the reunification.