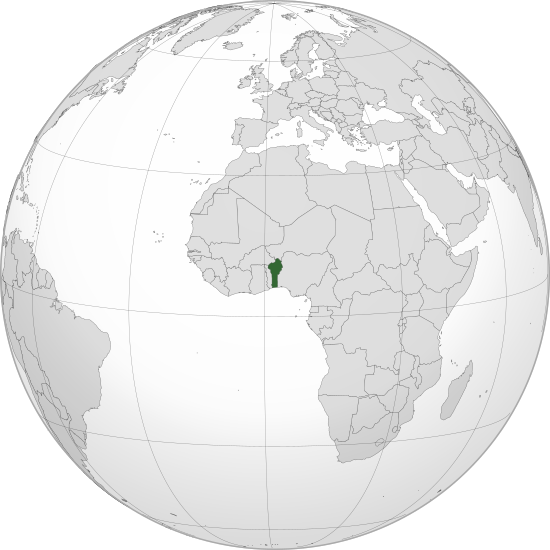 Benin (/be.nɛ̃/), in long form the Republic of Benin (in Yoruba: Orílɛ̀-èdè Olómìnira ilɛ̀ Benin and in gun-gbe: Beninto), is a state in West Africa, which covers a area of ​​114,763 km2 and extends over 700 km, from the Niger River in the north to the Atlantic coast in the south. Benin had a population of 10,741,458 in 2016. The country is part of ECOWAS and neighbors Togo to the west, Nigeria to the east, Niger to the north-northeast and Burkina Faso to the north- North West. Benin gained full independence on August 1, 1960, under the name of the Republic of Dahomey. The powers were transmitted to President Hubert Maga by the French Minister of State Louis Jacquinot. In 1972, officer Mathieu Kérékou took power: in 1974 he adopted Marxism-Leninism as the official government ideology and, in 1975, renamed the country People's Republic of Benin. At the end of the 1980s, serious economic difficulties led to the end of the regime: Benin began a process of democratic transition and, in 1990, adopted a new Constitution. The democratic transition is ensured by Nicéphore Soglo, former Africa director of the World Bank. The name of Benin is retained, the country simply becoming the Republic of Benin. Mathieu Kérékou, defeated in the elections by Nicéphore Soglo, relinquished power. He returned to it democratically through the ballot box in 1996 and did not restore the dictatorship. He governed the country until 2006. The official capital is Porto-Novo (named Hogbonou by the Goun and Adjatchè by the Yorubas), Cotonou being the economic capital. Benin has French as its official language and the CFA franc as its currency. The political system of Benin is of the presidential type and the current President of the Republic is the businessman Patrice Talon, who succeeded Boni Yayi during the elections of March 20, 2016: the transfer of power took place on April 6, 2016 at the Marina Palace in Cotonou. Benin is a member of several international organizations, including the International Organization of La Francophonie and the Organization of Islamic Cooperation. Benin, during the presidency of Patrice Talon, becomes an authoritarian regime; according to international experts this nation of Africa can be considered the most stable due to its constitutional and political institutions. One can wonder about the content of this stability in view of several worrying factors: the exile of political opponents and the imprisonment of an opponent.

Benin shares 2,123 km of land borders with four countries: Burkina Faso (386 km), Niger (277 km), Nigeria (809 km) and Togo (651 km). The International Court of Justice of the United Nations defined on July 12, 2005 the current border between Benin and Niger, after a dispute over the islands in the bed of the Niger and Mekrou rivers: nine islands were attributed to Benin and sixteen, including that of Lété, in Niger. The coastline, on the Gulf (or bay) of Benin — in the great Gulf of Guinea — extends over 121 km. The territory, formed by a narrow strip of land oriented perpendicular to the coast, extends from north to south over a length of approximately 672 km. It reaches a width of 324 km at its widest point in its northern part.

Stretched in shape between the Niger River in the north and the coastal plain in the south, the relief of the whole country is not very rugged. The north of the country is mainly made up of savannas and semi-arid mountains, such as the Atacora range, which extends to Togo and Ghana on the one hand and to Niger on the other. The highest point in the country is Mount Sokbaro (or Sagbarao) (800 meters). The south of the country consists of a coastal plain b