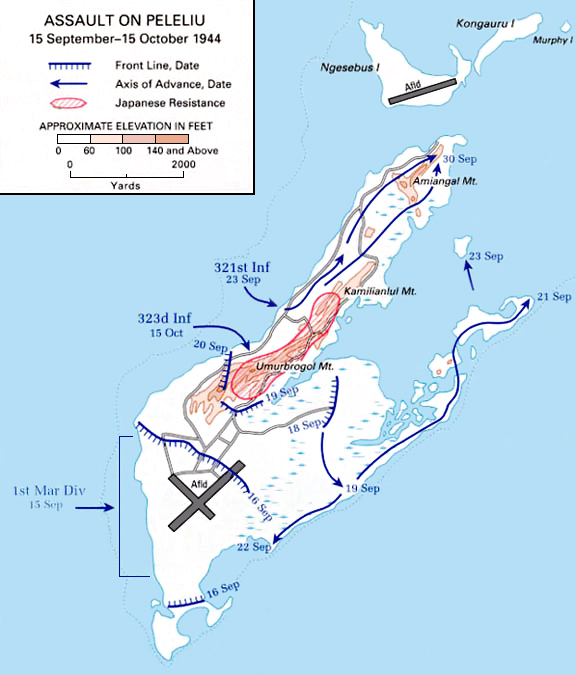 The Battle of Peleliu, code name Operation Stalemate II ("Impasse" in French), took place during World War II between the United States and Japan in the Pacific between September and November 1944 on the island of Peleliu in the Palau archipelago. American forces, originally the only 1st Marine Division, later reinforced by the Army's 81st Infantry Division, fought for this tiny coral island and its airfield. U.S. General William H. Rupertus, the commander of 1st Marine Division, predicted that the island would be secured within four days, but due to well-established fortifications and strong Japanese resistance, the fighting lasted longer. two months. This battle is arguably the most controversial of the war, due to the island's questionable strategic value and the large number of dead. Indeed, after the decisive American victory in the Battle of the Philippine Sea, Admiral William Halsey felt that the Japanese air force no longer represented such a serious threat and Peleliu's objective therefore appeared less strategic. In proportion to the number of men involved, Peleliu was after Iwo Jima the second deadliest battle of the Pacific War for the Americans, with a third of those involved having been either killed or wounded; taking into account only combat infantry units and battalions, the loss rate on the island reached nearly 65%. More than 97% of the Japanese defenders perished on their side. The two armies annihilated each other in a battle of attrition where the savagery of both sides, and the harshness of the fighting, were deemed unmatched post-war by veterans of previous and subsequent clashes against the Japanese Empire. After the end of the battle, a few skirmishes continued to break out sporadically. The last group of Japanese soldiers, made up of 26 men, did not surrender to the American troops stationed there until April 21, 1947, almost two and a half years after the end of the conquest of the island.

During the summer of 1944, victories in the Southwest and Central Pacific brought the war close enough to Japan to allow American bombers to strike Japanese territory itself. But there was disagreement between the two strategies proposed to crush the empire of Japan. MacArthur's strategy was to reconquer the Philippines, so that he could then set out to conquer the Japanese archipelago. Admiral Nimitz's strategy involved a methodical reconquest of the Pacific islands in order to then be able to conquer the southernmost islands of Japan. Both of these strategies included the conquest of the Palau archipelago, including the islands of Angaur and Peleliu, and the 1st Marine Division had already been selected for the assault on Peleliu. Peleliu is a small, thirteen square kilometer island at the northeastern end of the Palau Archipelago, 900 kilometers east of Mindanao in the Philippines. The two commanders wanted to neutralize a Japanese air threat and build their own airfield. The need for such a battle was often questioned, even before it began, and it was later viewed as unnecessary.

During the summer of 1944, the Palau archipelago was defended by around 30,000 Japanese, with around 11,000 men at Peleliu, made up of the 14th Infantry Division as well as Korean and Okinawan workers. Colonel Kunio Nakagawa (en), commander of the 2nd regiment of the division, directs the development of the island's defenses. After the loss of the Solomon Islands, Marshall Islands and Gilbert, the Imperial Army