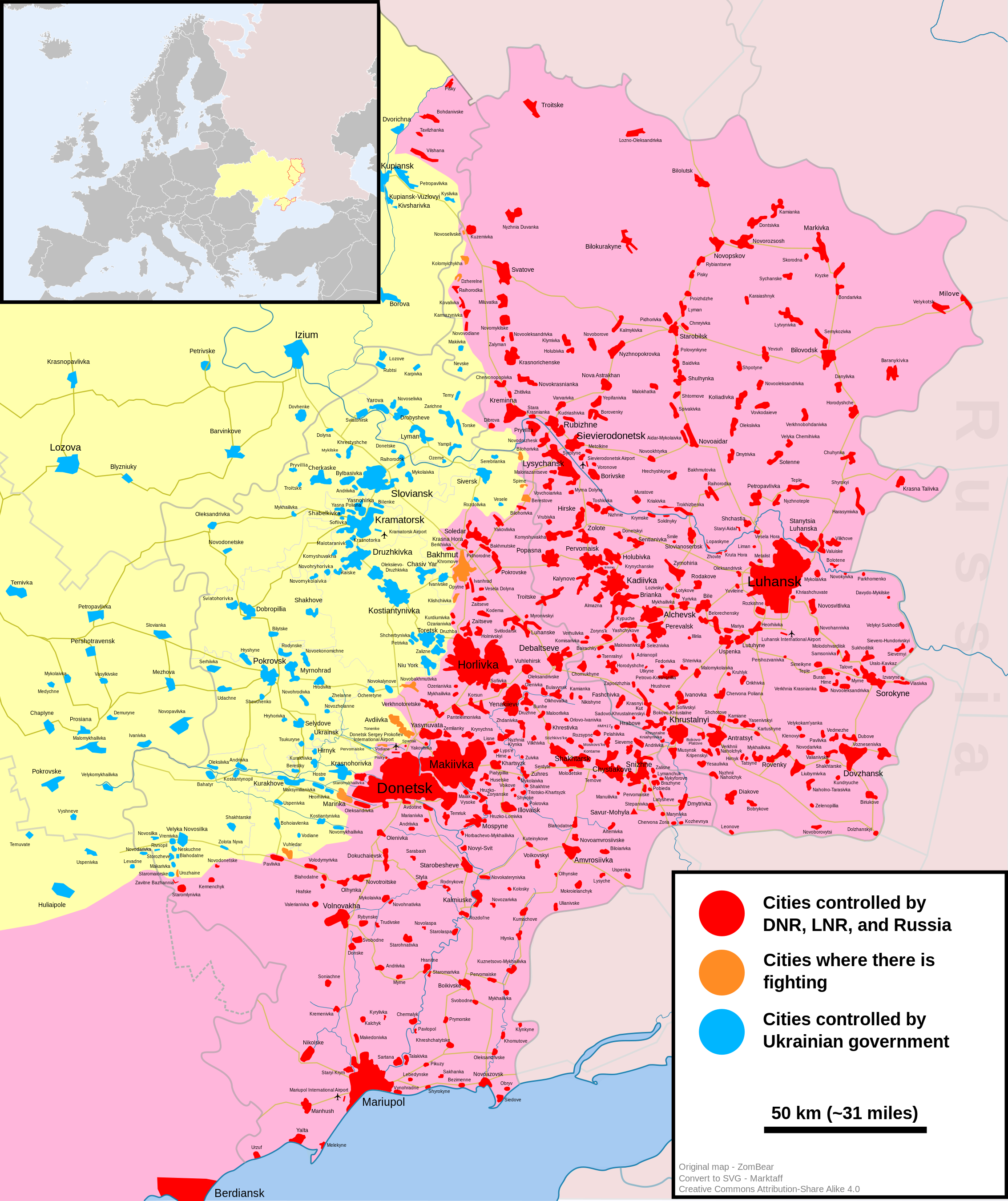 The Battle of Donbass is an ongoing military engagement that began on April 18, 2022 between the armed forces of Russia and Ukraine for control of Donetsk, Lugansk and Kharkiv Oblasts during the full-scale invasion of the Ukraine by Russian troops,,. It is considered the second strategic phase of the Russian invasion of Ukraine. The offensive is currently taking place along the Rubizhne - Izium - Hulyaipolis - Mariupol line with the aim of encircling the Ukrainian troops in the Donbass and annexing the entire Donetsk and Luhansk regions to the quasi-states of the Republic People's Republic of Donetsk (DPR) and the People's Republic of Lugansk (LPR). The initial development and strategic importance of the Battle of Donbass has been compared to the Battle of Kursk (1943).

In the operational districts of Slobozhansky and Donetsk, Russian troops have intensified offensive and assault operations in some areas. Secretary of the National Security and Defense Council Oleksiy Danilov said that on the morning of April 18, the occupiers tried to break through Ukrainian defenses along almost the entire front line in the Donetsk, Kharkiv and Luhansk regions with the aim of to occupy part of Donetsk and Luhansk by the Orthodox Easter (April 24). On the morning of April 18, the head of the Luhansk military administration, Serhiy Haidai, announced that Russian troops had entered the town of Kreminna near Rubizhne and Lysychansk. At night, Russian troops launched a rocket attack on Kramatorsk, resulting in the destruction of infrastructure, with information about casualties being clarified.

In an exclusive interview with India Today, Russian Foreign Minister Sergei Lavrov acknowledged the start of a new offensive in Donbass, saying it was a "very important moment in this whole special operation". To address the new stage of the Russian offensive in Ukraine, French President Emmanuel Macron and US President Joe Biden held a meeting with representatives from France, Germany, the United Kingdom, Canada, Italy, Poland and Romania. They will be joined by NATO Secretary General Jens Stoltenberg, President of the European Commission Ursula Von der Leyen and President of the European Council Charles Michel. The head of the Lugansk regional military administration, Serhiy Haidai, called on residents of the region to evacuate immediately so as not to become hostages or be killed by the Russians.

Russian forces occupied residential areas in the town of Popasna in Luhansk. Additionally, Libyan and Syrian mercenaries likely associated with the Wagner Group reportedly clashed with Ukrainian forces in the town, with Oleksiy Danilov claiming that 20-25 mercenaries were killed. Chechen Republic leader Ramzan Kadyrov also claimed that Chechen and NRL forces had taken control of Rubizhne; however, this claim has not been verified.