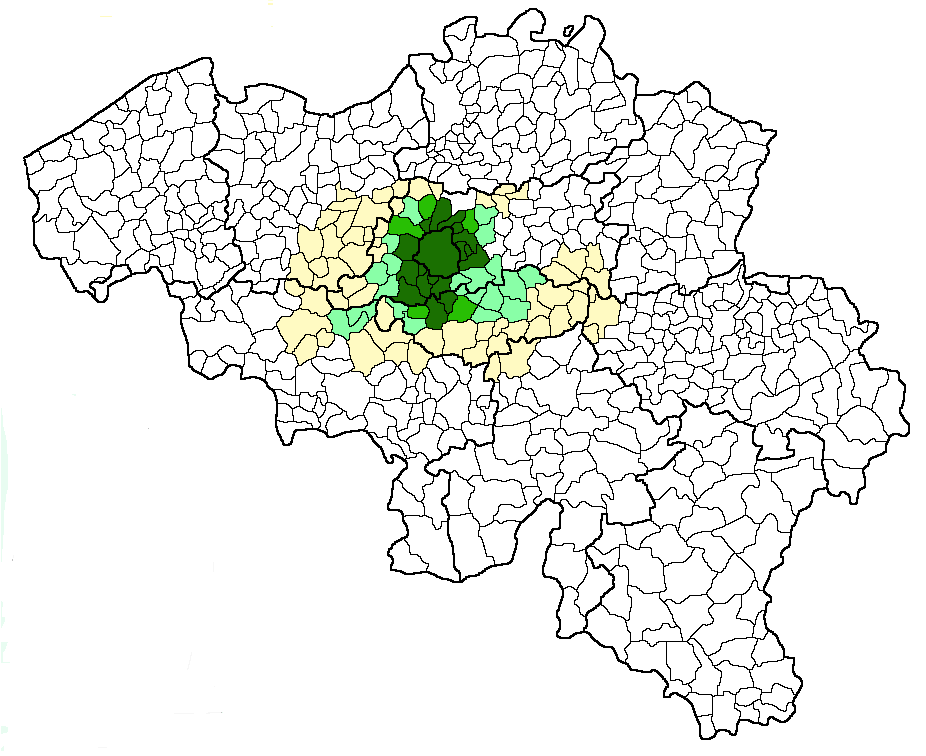 Brussels (/bʁysɛl/; in Dutch: Brussel, /ˈbrʏsəl/; in German: Brüssel /ˈbʁʏsl̩/), sometimes also called urban area of ​​Brussels or Greater Brussels, is a city and agglomeration of Belgium which extends over beyond the administrative limits of the Brussels-Capital Region to encompass parts of Flemish Brabant and Walloon Brabant, and at the center of which is the municipality of Brussels proper, whose name used by the Belgian constitution is city of Brussels. Most of the institutions of the European Union, as well as many international organizations among other lobbyists, including NATO, have their headquarters in the Brussels-Capital Region. By extension, we therefore say “Brussels” to designate, in general and by metonymy, the European institutions (most often, the European Commission). The initiative of the Brussels Metropolitan or metropolitan area of ​​Brussels, launched in 2008, aims to better coordinate the city and its hinterland to promote Greater Brussels as an attractive economic metropolis in the heart of Europe, to give it more influence on the world stage and stimulate growth and job creation there. This cooperation platform involves the participation of four employers' organizations - FEB, BECI, Voka and UWE.

Composition of the morphological agglomeration

The morphological agglomeration - taking into account the continuity of the built environment - extends over the three Belgian Regions: the whole of the Brussels-Capital Region, and parts of the Flemish Region and the Walloon Region. The urban residential area of ​​Brussels according to Statbel includes the 19 municipalities of the Brussels-Capital Region (Anderlecht, Auderghem, Berchem-Sainte-Agathe, Brussels, Etterbeek, Evere, Forest, Ganshoren, Ixelles, Jette, Koekelberg, Molenbeek-Saint- Jean, Saint-Gilles, Saint-Josse-ten-Noode, Schaerbeek, Uccle, Watermael-Boitsfort, Woluwe-Saint-Lambert and Woluwe-Saint-Pierre), the six municipalities with facilities (Kraainem, Drogenbos, Linkebeek, Rhode-Saint -Genèse, Wemmel and Wezembeek-Oppem) and eleven other municipalities on the outskirts of Brussels, nine municipalities in Flemish Brabant (Zaventem, Beersel, Dilbeek, Grimbergen, Hal, Machelen, Leeuw-Saint-Pierre, Tervuren and Vilvoorde), and two in Walloon Brabant (Waterloo and Braine-l'Alleud). This makes a total of 36 municipalities. The morphological agglomeration also covers parts of the municipalities of Braine-le-Château, Lasne, Asse, Meise and Steenokkerzeel. Since less than half of the population of these municipalities lives in the central residential area, they are generally not considered as metropolitan municipalities. Of course, this list of municipalities may vary according to the definition chosen, causing the number of municipalities in 2001 to vary between 31 and 41.

The agglomeration is extended by the suburbs of Brussels. The latter contains the entire green belt of Brussels but extends beyond it to six of the ten Belgian provinces.

His name is pronounced [bʁysɛl] (the “x” is pronounced [s] (“ss”), as in sixty). Indeed, if the graphic x originally denoted the group /ks/ (see old forms below) and this, until the 12th century, thereafter the c [k] was reduced and assimilated to s following, hence the double ss in the Dutch form, while in the more conservative French form the graphic x held. The pronunciation [ks] of French only dates from the 18th century, without this modification affecting traditional Brussels usage. There are other examples in which x notes [s], such as sixty or Auxerre (pronounced Ausserre [oˈsɛʁ] in Burgundy-Franche-Comté), although the causes are completely different. In France we often hear the pronunciation [bʁyksɛl] or [bʁyksɛlwa], which