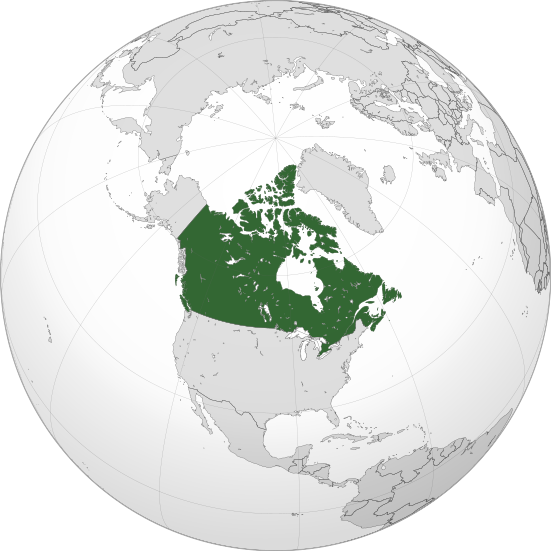 Canada (pronounced /kanadɔ/ or /kanada/; in English /ˈkænədə/) is a country located in the northern part of North America. A constitutional monarchy with a parliamentary regime, it is constituted as a federation bringing together ten provinces and three territories. The country is bordered by the Atlantic Ocean to the east, the Arctic Ocean to the north, and the Pacific Ocean to the west. Canada includes two land borders with the United States, one to the south and the other to the northwest with Alaska, as well as a maritime border with France, through the archipelago of Saint- Pierre-et-Miquelon, and Denmark, via Greenland. Canada's land territory covers 10 million square kilometres, making it the second largest country in the world by land area after Russia. In 2019, it has more than 37 million inhabitants and is thus the 37th country in the world in terms of population. The territory contains more than 31,700 lakes, which makes Canada one of the countries with the largest reserves of fresh water in the world. The official languages ​​at the federal level are English and French. The federal capital is Ottawa and the currency, the Canadian dollar. The first occupants of Canadian territory were the First Nations, whose migrations date back approximately 15,000 years to the last glaciation, which lowered the level of the oceans and created a land bridge connecting Eurasia to America, allowing these to settle. While Vikings were present from the 11th to the 14th century, the first explorations by Europeans began at the end of the 15th century, culminating with the expeditions of Frenchman Jacques Cartier to the Gulf of Saint Lawrence. After a few unsuccessful experiments in the first half of the 16th century, on August 5, 1583, the English colony of Newfoundland was founded, followed by the first permanent French trading posts on the continent between 1600 and 1608, beginning the process of European colonization. Subsequently, other British and French colonies were established, notably in the region of the Atlantic coast (Nova Scotia, Acadia), in the valley of the St. Lawrence River and the Labrador peninsula (New France) as well as in the Arctic zone, while other European powers such as Spain and Russia explored the rest of Canadian territory. Following various conflicts, especially the War of the Spanish Succession (1701-1714), the War of the Conquest (1754-1760) and the War of Independence of the United States (1775-1783), the Great Britain gained and lost territory in the 18th century, resulting in what is today's Canadian territory. Three of these colonies federated on July 1, 1867 and formed the Dominion of Canada, an independent nation under partial domination of the British Crown. Its total sovereignty was then guaranteed by the Balfour Declaration of 1926, the Statute of Westminster of 1931 and the patriation of its Constitution in 1982. It should be noted that the National Assembly of Quebec never ratified the law on the repatriation of the Canadian Constitution. Canada's contemporary history has been marked by vigorous territorial expansion, the gold rush and participation in the First World War. The country was hard hit by the Great Depression in 1929, but its economy rebounded thanks to its participation in the Second World War after which it emerged as a middle power and was one of the victors as a member of the Allies. In 2015, Canada has the tenth highest per capita income and is ranked ninth by the UNDP in terms of the Human Development Index. It is the tenth largest economy in the world by its GDP in 2017, the main sectors of its economy being services, telecommunications, agriculture