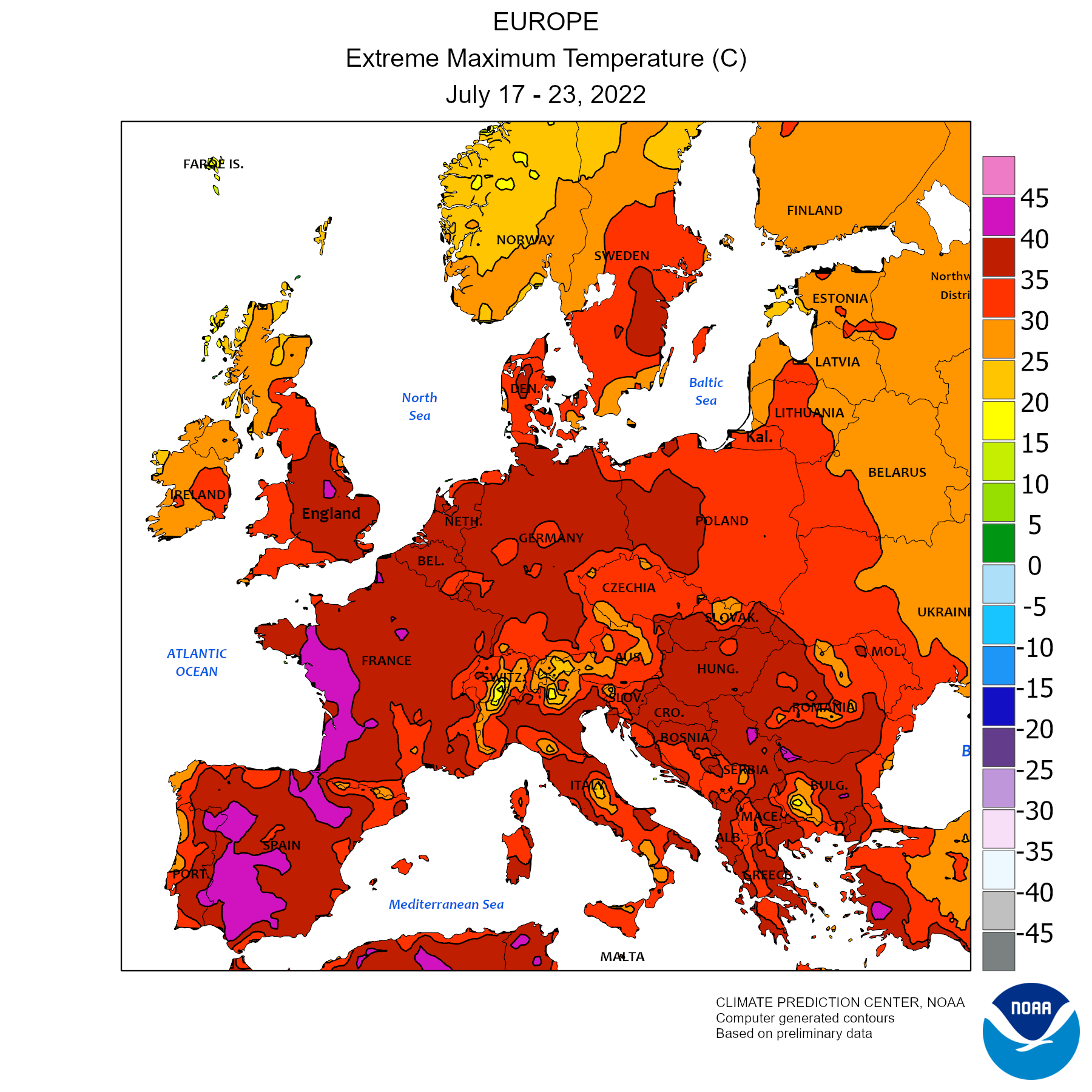 The 2022 heat wave in Europe is a heat wave over much of Europe, the first episode of which begins in mid-June 2022, resulting in record temperatures throughout the region. This phenomenon favors the outbreak of a series of forest fires across Europe. High temperatures kill hundreds in Spain and Portugal. The heat wave reached the United Kingdom in July, where the meteorological service, the Met Office, issued its red temperature alert for the first time. Several cities are evacuated in Portugal and France because of forest fires. These heat waves are linked to global warming in Europe,

The heatwave episode of June 2022 is the result of an interaction between the presence of anticyclones, the passage of the non-tropical remnants of tropical storm Alex over northwestern Europe, strong sunshine and a mass of air emanating from North Africa entering the Iberian Peninsula loaded with dust causing haze in the center and south of the peninsula. Not only do the maximums exceed 40°C over much of Europe, but the nights are very hot with minimums above 20°C.

The second heat wave begins around July 9, 2022. It is due to the presence of a persistent anticyclone between the British Isles and the center of Europe, extending a barometric ridge towards Morocco. The clear sky allows the air mass to heat up daily through sunshine and the compression effect. At the same time, an upper depression, southwest of Portugal, pushes Saharan air towards western Europe. The start of the week of July 17 sees many temperature records being broken across Europe. However, on July 21 and 24, frontal troughs swept across the British Isles and northern Europe, ending the heatwave in those areas. The high pressure persists further south, still favoring the heat wave, but it is gradually easing. Evolution of the maximums during the four weeks of July.

The 3rd heat wave started on July 31 in the Mediterranean regions and spread to the South-West of France the following week. This episode is less intense than those of June and July but of longer duration. An omega blockage is the cause of this episode with an anticyclone in the North Sea framed by 2 depressions to the southwest and southeast favoring clear skies and a southerly flow over Western Europe.

From June 14 to 20, Germany recorded 8% more deaths than normal as the temperature reached up to 39.2°C in Cottbus, Brandenburg,. The second heat wave reached Germany on July 20 with record values ​​of 40.1°C in Hamburg and 40.3°C in Bad Mergentheim. From July 11 to 17, the country experienced a 16% excess death rate and the following week, 23% above normal. On August 12, at Kaub, the level of the Rhine fell to 38 centimeters, below the 40 centimeter level considered necessary for a large part of river transport. It is expected to continue to drop to around 35cm by August 15, according to data and forecasts from the Federal Waterways Authority.

A special extreme heat alert was activated by the AEMET from June 10 for 12 provinces and yellow vigilance for others. The heat wave was expected to last at least until June 15. On June 11, high temperatures were recorded in the southwest of the Iberian Peninsula, with 41.0°C in Seville. The following day, temperatures reached 43.2°C in Almadén, province of Ciudad Real, the highest value