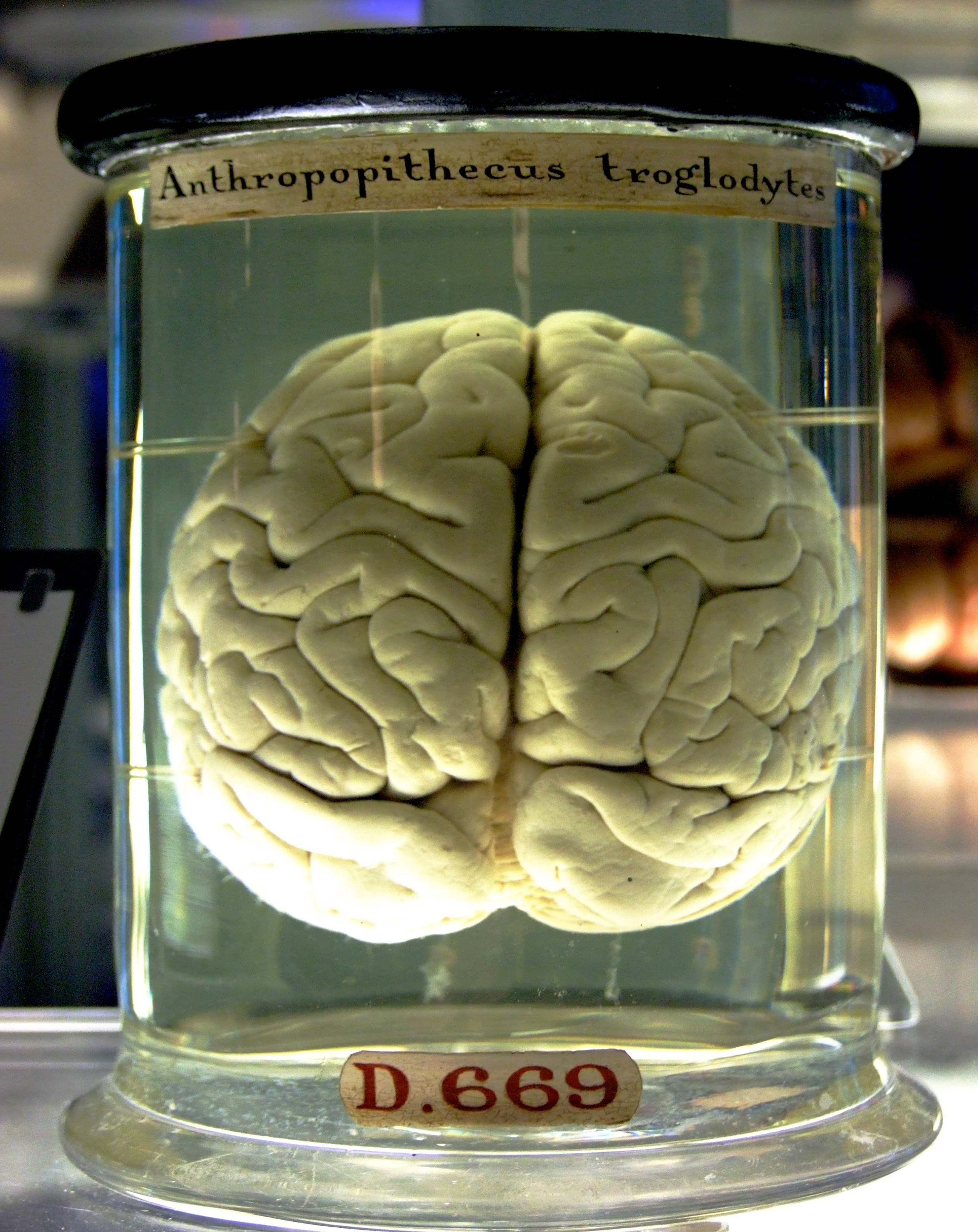 The brain is the main organ of the nervous system of bilateral animals. This term is common (unscientific) language and in chordates, like humans, it can refer to the encephalon, or only part of the encephalon, the prosencephalon (telencephalon + diencephalon), or even only the telencephalon. However, in this article, the term brain takes its broadest meaning. The chordate brain is located in the head, protected by the skull in the craniates, and its size varies greatly from species to species. For animals of other branches, some nerve centers are also called brain by analogy with chordates. The brain regulates other organ systems in the body, by acting on muscles or glands, and is the seat of cognitive functions. This centralized control of the body allows rapid and coordinated responses to environmental variations. Reflexes, patterns of simple responses, do not require intervention from the brain. However, more sophisticated behaviors require the brain to integrate information transmitted by sensory systems and provide an appropriate response. The brain is an extremely complex structure that can contain up to several billion neurons connected to each other. Neurons are brain cells that communicate with each other through long protoplasmic fibers called axons. The axon of a neuron transmits nerve impulses, action potentials, to specific target cells located in more or less distant regions of the brain or the body. Glial cells are the second cell type in the brain and perform a wide variety of functions, centered around supporting neurons and their functions. Although glial cells and neurons were probably first observed at the same time in the early 19th century, unlike neurons whose morphological and physiological properties were directly observable to early nervous system investigators, glial cells were considered , until the middle of the 20th century, simply like “glue” that “sticks” neurons together. Despite great advances in neuroscience, the functioning of the brain is still poorly understood. The relationship it has with the mind is the subject of much discussion, both philosophical and scientific. Since its inception, brain research has gone through three main phases: philosophical phase, experimental phase and theoretical phase. For the future of neuroscience, some authors predict a simulation phase.

The brain is the most complex biological structure known, which often makes it difficult to compare brains of different species on the basis of their appearance. Nevertheless, the architecture of the brain has several characteristics common to a large number of species. Three complementary approaches make it possible to highlight them. The evolutionary approach compares the anatomy of the brain between different species and is based on the principle that the characters found on all the descending branches of a given ancestor were also present in their common ancestor. The developmental approach studies the process of brain formation from embryonic stage to adult stage. Finally, the genetic approach analyzes the expression of genes in different areas of the brain. The origin of the brain dates back to the appearance of bilaterians, one of the main subdivisions of the animal kingdom characterized in particular by bilateral symmetry of organisms, around 550-560 million years ago. The common ancestor of this taxon followed a tubular, vermiform and metamerized type organization plan;