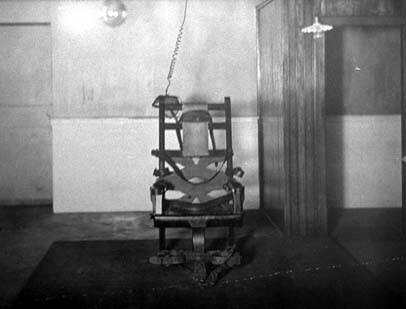 The electric chair is an instrument of death penalty by electrocution, invented and used in the United States (and also in the Philippines in the past). It was developed in the late 1880s by electrical engineer Harold P. Brown and dentist Alfred P. Southwick at the request of Thomas Edison (to discredit alternating current versus direct current in the War of the Currents), as the United States sought a less cruel and more effective alternative to hanging. Since its invention, the electric chair has been used to execute 4,441 death row inmates (including 27 women and at least 57 minors) in the United States. With 692 electrocutions between 1890 and 1963, New York State holds the record for killings with this method. Today, the electric chair method is maintained only as a secondary method that can be chosen over lethal injection at the request of the prisoner, except in Tennessee and South Carolina, where it can be used without prisoner intervention if drugs for lethal injection are not available.

The death row inmate is seated and strapped to a special chair (a process which in itself can sometimes take up to ten minutes, as in the case of Daryl Holton in 2007). Electrodes are applied to certain parts of the body, usually on the partially or completely shaved head and on one leg. Better conductivity is ensured by placing sponges soaked in conductive solution (electrolyte) between the electrodes and the skin; until the 1920s, we contented ourselves with thoroughly wetting the contact area. Then a strong potential difference is applied between the electrodes, resulting in a strong electric current in the body and electrification. The modalities have varied over time but remain based on automatic cycles. A first electrocution of two thousand volts for about ten seconds can reduce the resistance of the skin, and lead to loss of consciousness. Then after a pause of a few seconds, the current is sent again for about twenty seconds, with a voltage lowered to around five hundred volts in order to prevent the body, whose temperature can reach 59°C, from catching fire. The condemned man's vital functions are then checked by the doctor present on the spot to ensure that he is indeed dead. In the past, this type of execution had the effect, as with the Rosenbergs, of raising the temperature of the body to 100°C, which causes boiling of the blood, hematidrosis, burning of the hair and the skin. skin, urination and defecation. In some American states, a leather mask is applied to the convict's head to prevent the eyeballs from protruding from the sockets and to avoid this horrible sight to witnesses, while in other states, the hood is chosen. to hide the condemned man's face from witnesses. The execution of Albert Clozza in Virginia, on July 24, 1991, goes wrong: defective electrodes and an incorrectly regulated voltage increase the pressure of the vapor produced inside the body, causing the ejection of the eyeballs of the condemned man .

Joseph Chapleau, a French Canadian farmer sentenced to death in January 1890 for killing his neighbor Erwin Tabor (age 42) in Plattsburgh on January 28, 1889, was supposed to be the first person to die in the electric chair. However, his sentence was commuted to life imprisonment by New York State Governor David B. Hill on July 16, 1890 (just four days before his scheduled execution date), after locals of Plattsburgh and