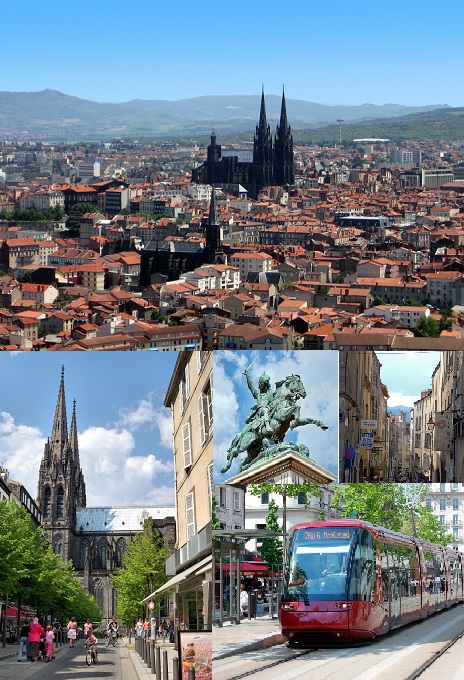 Clermont-Ferrand (pronounced: /klɛʁ.mɔ̃ fe.ʁɑ̃/; in Auvergne Occitan: Clarmont-Ferrand) is a city in central France located in the Massif Central and the Auvergne-Rhône-Alpes region. It is the historic capital of Auvergne and the capital of the Puy-de-Dôme department. The modern city was born from the union in the 17th century of two ancient rival cities, Clermont and Montferrand. The Gallo-Roman city of Augustonemetum appears after the disappearance of the Arvernian metropolis Nemossos. It then takes the name of Arvernis then of Clermont. At the beginning of the 12th century, the counts of Auvergne founded the competing town of Montferrand. In 1630, Louis XIII imposed by the edict of Troyes the unification of the two neighboring towns. This union will be reaffirmed by Louis XV in 1731. Clermont-Ferrand is the 22nd municipality in France with 147,865 inhabitants in 2019. Its urban unit brings together 274,141 inhabitants in 2019 and its area of ​​attraction 504,157 inhabitants in 2018. The urban complex reached the rank of metropolis on January 1 2018 under the name of Clermont Auvergne Métropole. A major French university and research centre, the city retains important administrative functions and intermediate services. With more than 40,000 students, ie a quarter of the municipal population, and 6,000 researchers, it is the first city in France to join the UNESCO learning city network. City with an industrial tradition, headquarters of Michelin, one of the world's two largest tire manufacturers, Clermont-Ferrand is also well positioned in the pharmaceutical, food-processing and aeronautical industries. It hosts three competitiveness clusters. The city is located at the foot of the Limagne fault and the Puys chain, a natural site listed since July 2018 as a "tectonic high place" on the UNESCO World Heritage List.

To the west, Clermont-Ferrand is overlooked by a granite plateau (800 m on average) on which is the Puys chain and the Limagne fault, the largest chain of volcanoes in Europe, among which stands the most famous, the puy de Dôme at 1465 meters. To the north of the agglomeration stretches the fertile plain of Limagne bathed by the Allier, the second cereal plain in France, rich in volcanic residues accumulated over 400,000 years. Clermont-Ferrand is the crossroads of the north-south Paris – Béziers (A71 and A75) and transverse east-west Lyon – Thiers – Ussel – Brive – Périgueux – Bordeaux (A89) motorway axes. By road, Clermont-Ferrand is located 420 km from Paris, 370 km from Bordeaux, 335 km from Montpellier, 300 km from Orléans, 190 km from Bourges, 175 km from Limoges, 165 km from Lyon, 140 km from Saint -Etienne and 50 km from Vichy.

A large part of Clermont-Ferrand is in the center of an old volcanic cirque. The city is in fact built in the heart of an old phreato-magmatic volcano (lava then volcanic lake) and in the center of the Maar de Jaude crater (from the Place de Jaude to the Europe crossroads of Chamalières) approximately 156,000 years old. . This old volcanic crater, probably the oldest in the Puys chain, measures about 1.5 km in diameter and was filled in by alluvium from the volcanic lake from the Tiretaine, a small stream that crosses the city underground. and by the magmatic flows of Pariou, a younger volcano, close neighbor of the Puys chain to the west. The city developed around a volcanic mound known as the central plateau on which the historic quarters and the cathedral are built. The other hillsides to the west, and in particular the Montjuzet (former mount to the Jews), old wine-growing hillsides, are also