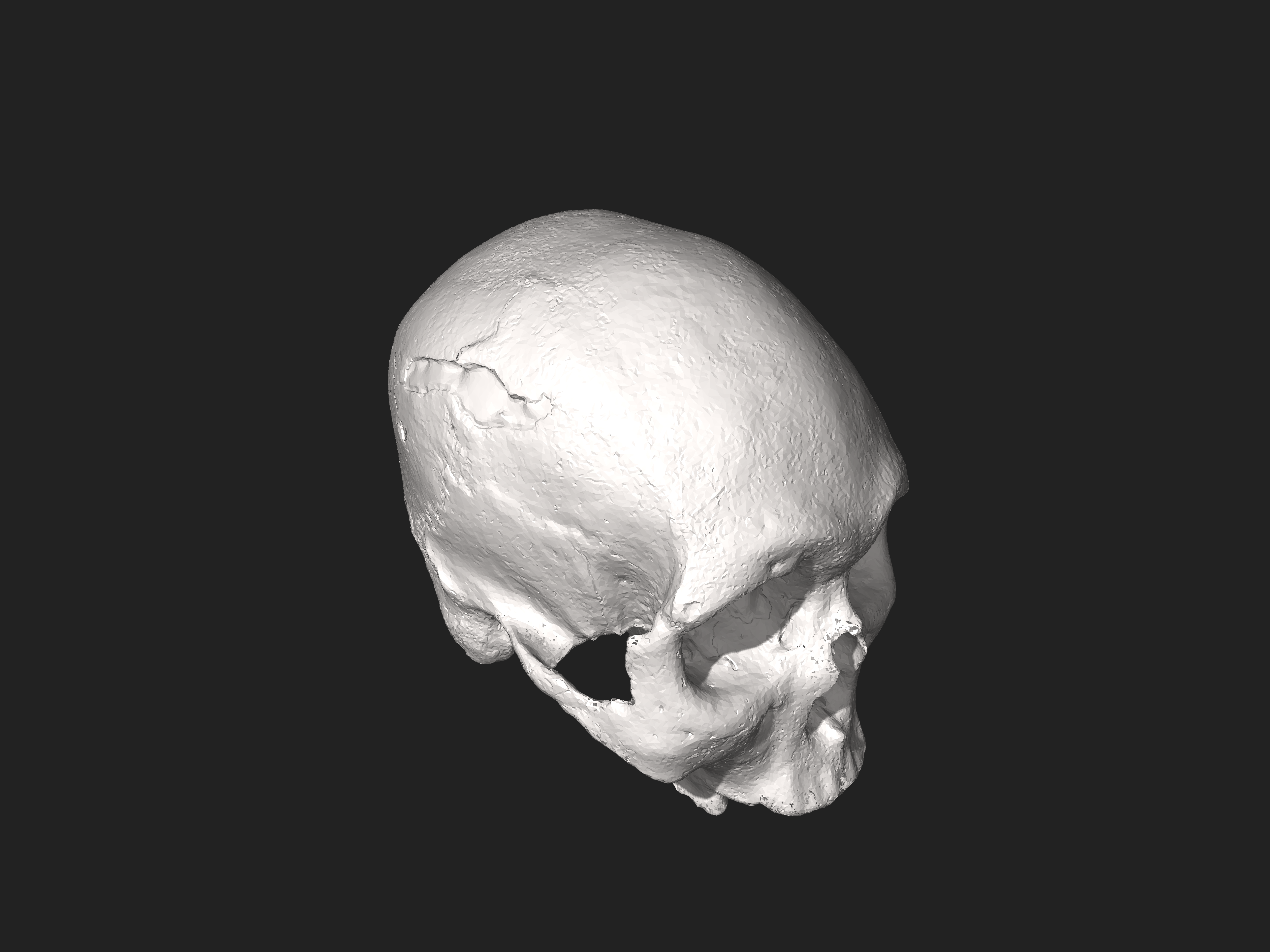 The skull is a bony or cartilaginous structure of the head, characteristic of the craniates (which include vertebrates). The main role of the skull is to protect the central nervous system that surrounds it, it also serves as attachment points for facial and neck muscles. The skull is made up of two parts: the neurocranium (or skull) and the splanchnocranium (or viscerocranium, or facial skull). Some species also have a dermocranium, formed of dermal bones. The skull is still cartilaginous in the embryo but becomes at least partially ossified in the adult for the entire lineage of Osteichthyes (which includes humans).

The skull is made up of two parts: the neurocranium (or skull), the upper part which protects the brain and the paired sensory organs, and the splanchnocranium (or viscerocranium, or facial skull), the lower part which supports the oral and pharyngeal cavities. The splanchnocranium originally has a respiratory function but this function is lost in most lineages and the splanchnocranium therefore enters mainly into the constitution of the skeleton of the jaws, the palate, the middle ear, the face, the neck, the tongue , larynx and neurocranium. Histologically, the skull of Vertebrates can go through different stages: a cartilaginous or chondrocranial stage, formed by chondrification of the mesenchyme. This skull is definitive in lampreys and chondrichthyans; an endoskeletal (or enchondral) bony or osteocranial stage, resulting from enchondral ossification. This stage succeeds the chondrocranium in all Osteichthyes in the adult state; some species also have an exoskeletal osteocranium (or dermocranium, or dermatocranium), formed of dermal bones (or membranous bones). This dermal ossification takes place directly from the connective tissue without passing through a cartilaginous stage. The dermatocranium is a covering of dermal bones (never cartilage) which covers the neurocranium and the splanchnocranium. It constituted the cephalothoracic shield in certain fossil vertebrates, the Ostracoderms. It is currently found only in the line of Osteichthyes where it was secondarily incorporated into the two previous formations while retaining an inductive action on the development of certain dermal bones (vault of the skull, vault of the palate, different units of the splanchnocranium). In Chondrichthyes, the dermocranium has regressed, has become undifferentiated, and is represented only by placoid scales fixed in the dermis which cover the whole body.

Neurocranium and splanchnocranium arise from two different embryological mechanisms. The neurocranium arises from the mesenchyme. These elements can take two forms: a cartilaginous form which forms the cartilaginous skull or chondrocranium; Definitive skull in Chondrichtians, Hagfishes and Lampreys. In all the other vertebrates this form is replaced by a bony form which gives the osteocranium. In mammals the chondrocranium forms at the base of the embryonic skull and consists of three cartilaginous nuclei: the basi-ethmoid, the basi-sphenoid and the basi-occipital. The paracordal cartilages grow to form the basal plate and other occipital cartilages grow to form the occipital arch (cartilage completely surrounding the cord). Cartilages will be associated with the ethmoid plate (resulting from the development of trabecular cartilage): these are the olfactory capsules and the nasal capsules. The spinal cord expands into the chondrocranium passing through the foramen magnum. The inner ear will occupy the otic capsule.

The neurocranium would be the oldest part of the skull because it is the only one that exists in Hagfishes. the