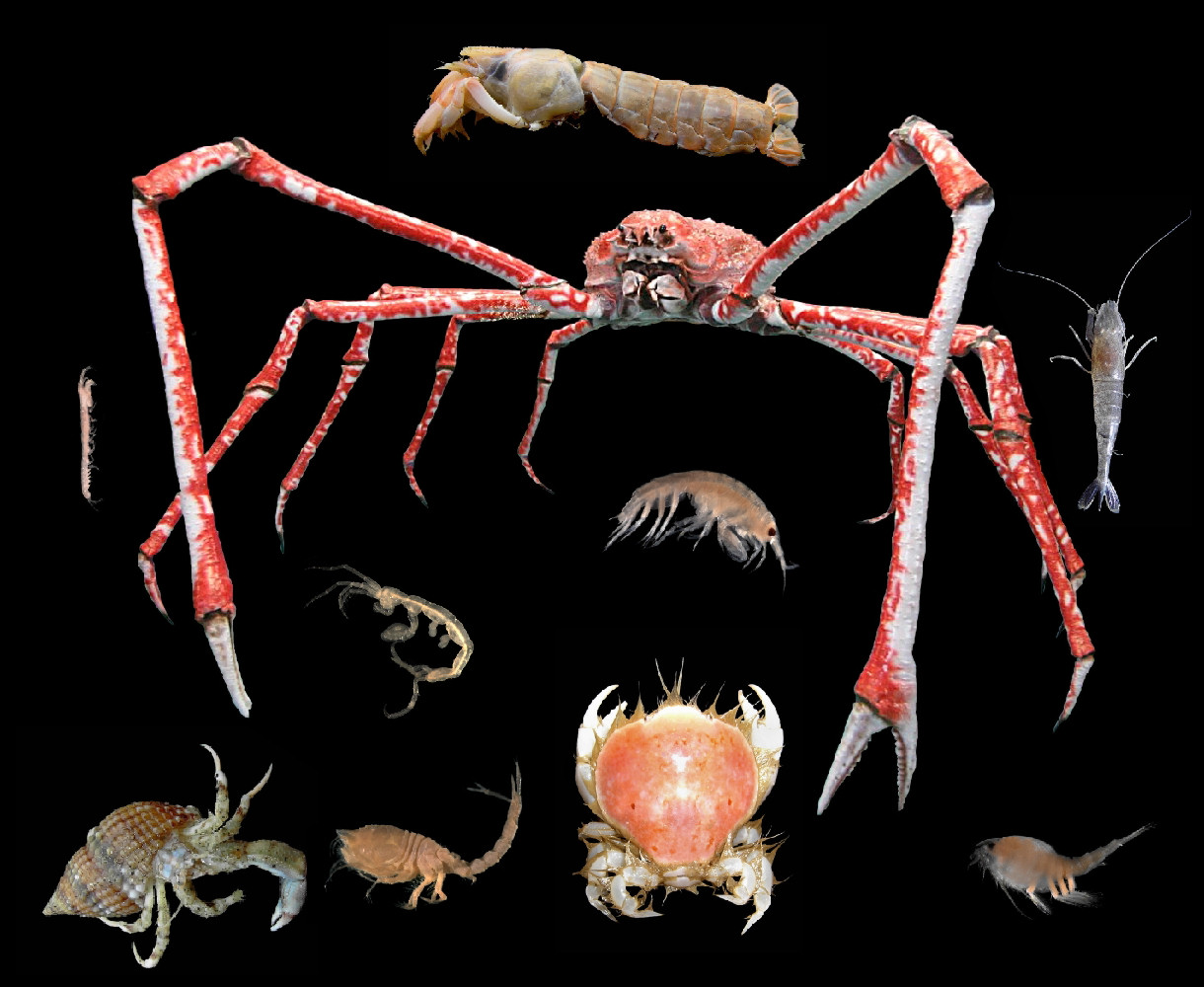 Crustaceans (Crustacea) are a sub-phylum of Arthropods. These are animals whose bodies are coated with a chitinoprotein exoskeleton called an exocuticle and often impregnated with calcium carbonate. This form of shell is more or less rigid, except in certain areas which remain flexible and allow the articulation of the different parts of the body as well as the appendages and allow movement. This cuticle (not to be confused with the shell, see below) constitutes a poorly extensible external skeleton which necessitates the use of molts to achieve linear growth. Their study is called carcinology, not to be confused with the medical meaning also given to this word, then synonymous with oncology. Formerly the term crustaceanology was also used. Crustaceans form a vast collection of more than 50,000 species whose shapes are as diverse as that of a barnacle, a copepod, a woodlouse or a lobster and whose sizes vary from the millimeter scale of small planktonic forms such as copepods to those of the largest terrestrial arthropod, the coconut crab (almost 1 m extended legs) or that of the largest living arthropod, the giant spider crab of Japan (almost 4 m wingspan). In the series of records, we must also mention the Antarctic krill, the species of which probably represents the highest animal biomass on the planet (500 million tonnes, approximate value). Most species are aquatic (marine or freshwater), some lead a life partially or totally terrestrial (woodlice, isopods, for example for the latter case). There are many parasitic species in their ranks, the morphology of which is sometimes very confusing.

The terminology relating to Crustaceans is quite complicated and certain terms have different meanings according to the taxa, the authors or the times. The body of Crustaceans is essentially made up of repeating elements, the metamers, somites or segments, in front and behind which we find respectively the acron and the telon (or "anal segment"), which are generally not considered. as genuine metamers. The metamers themselves are associated into functional units which make up the different body parts or tagmas. From front to back these tags are: The head or cephalon The thorax or perion The abdomen or pleon. Each somite usually has a pair of appendages.

They perform various functions (of locomotion - swimming or walking, of food capture, perception of the environment, respiration, mating, etc.) which determine extremely varied morphological adaptations despite which we can find there constant structural elements. They consist of a base of two articles: the coxa ("hip"), or coxopodite, inserted laterally or ventrally on the body to which follows the basis or basipodite on which are articulated two oars, one external or exopodite, composed of an indeterminate number of articles, the other internal or endopodite typically composed of 5 articles: ischiopodite, meropodite carpopodite, propodite and terminal dactylopodite. These appendages may also bear expansions: on the external side, the exites or epipodites and on the internal side, the endites. The latter constitute in particular the gnathobases, masticatory parts of the oral appendages. The two articles of the base constitute the protopodite of the appendix. We sometimes include an article proximal to the first two: the precoxa which would have been more or less completely incorporated into the wall of the body.

The head or cephalon