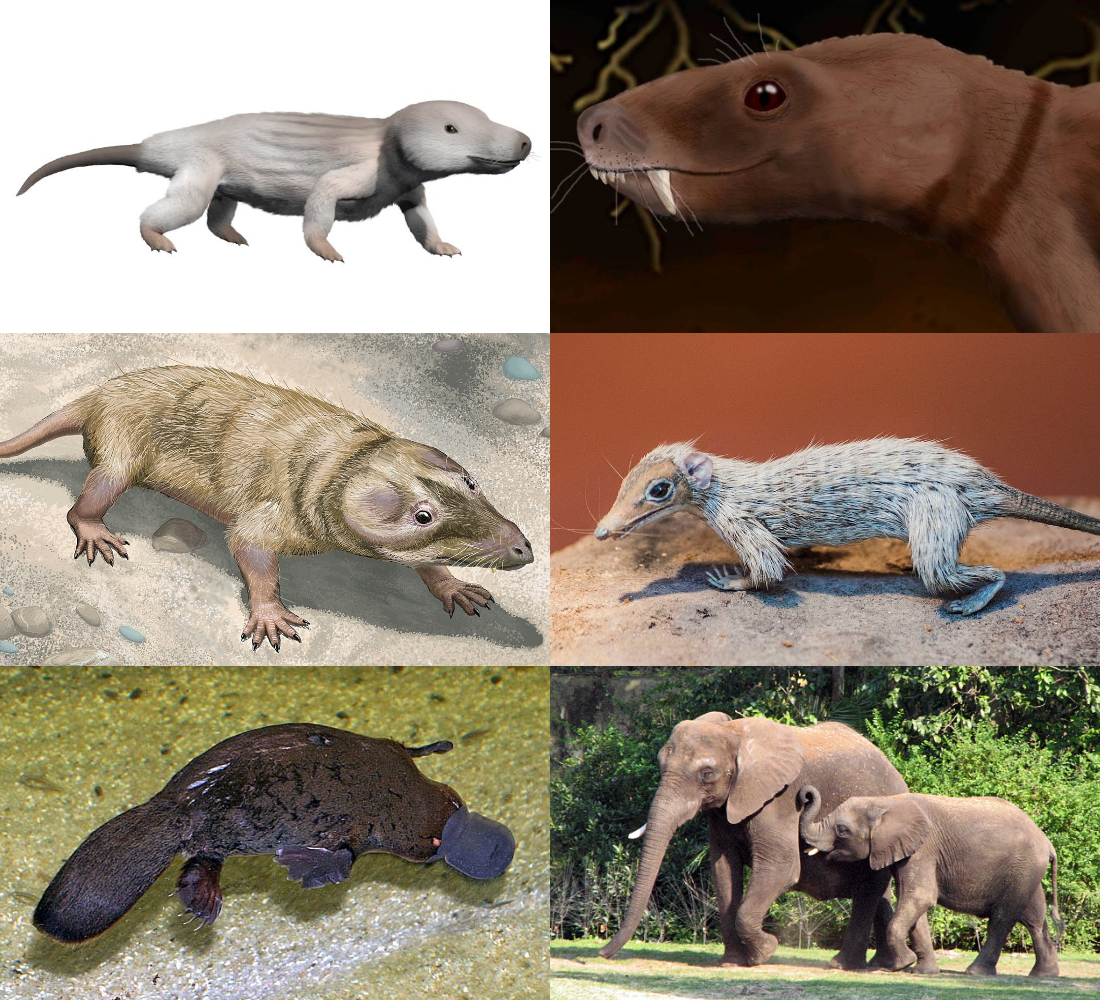 The cynodonts (Cynodontia) are a suborder and clade of eutheriodont therapsids that arose during the Upper Permian, around 260 million years before our era, and which include the mammals (including man), their ancestors and the groups relatives now extinct. This group shares a common ancestor with therocephalians and, together with the latter and the dicynodonts (Anomodontia), is one of the rare groups of synapsids surviving the Permian-Triassic extinction and which recolonize the ecological niches abandoned by the gorgonopsians during their disappearance. , competing with the first dinosaurs that begin to appear soon after. Over millions of years, they evolve into several lineages of herbivores and carnivores.

Early cynodonts have many skeletal characteristics of mammals. The teeth are completely differentiated and the cranium bulges at the back of the head. Apart from certain species of the crown group of mammals (notably the therians), all the cynodonts would probably have laid eggs. The temporal windows are much larger than those of their ancestors, and the widening of the zygomatic arch in a more mammalian skull allows for more robust jaw musculature. They also have a secondary palate which is lacking in other more primitive therapsids, except the therocephalians, which are the latter's closest relatives. However, the secondary palate of cynodonts mainly comprises the maxillae and palatines as in mammals, while the secondary palate of therocephalians mainly comprises the maxillae and the vomer. The dentary is the largest bone in their lower jaws. Cynodonts probably possess some form of warm-blooded metabolism, which is why there are many reconstructions of cynodonts as having fur. Being endothermic, they may need it for thermoregulation, but fossil evidence of their fur (or lack thereof) is elusive. Modern mammals have lipid-secreting Harderian glands to line their furs, but the telltale imprint of this structure is only found from the mammaliaform Morganucodon and others. Nevertheless, recent studies of Permian therapsid coprolites show that more basal therapsids may have had fur. Early cynodonts had many small foramina on their snout bones, similar to those of reptiles. This suggests that they would have had immobile, unmuscled lips like those of lizards, lacking muscular cheeks. As a muscular and mobile face is necessary to perform whipping movements and to avoid damage to the vibrissae, it is unlikely that early cynodonts possessed these. In prozostrodont cynodonts, the group that includes mammals, the foramina are replaced by a single large infraorbital foramen, indicating that the face becomes muscular and that whiskers would have been present. Derived cynodonts feature epipubic bones, these serve to strengthen the torso and support the abdominal and hind limb musculature, helping them to develop an erect gait, but at the expense of prolonged pregnancy, forcing these animals to give birth highly altricial young as in modern marsupials and monotremes. Only the placentals, and perhaps Megazostrodon or Erythrotherium, lose them. A specimen from Kayentatherium indeed demonstrates that at least tritylodontids (late Triassic) would already have a reproductive style fundamentally similar to that of marsupials, but pro