Breakup of the USSR 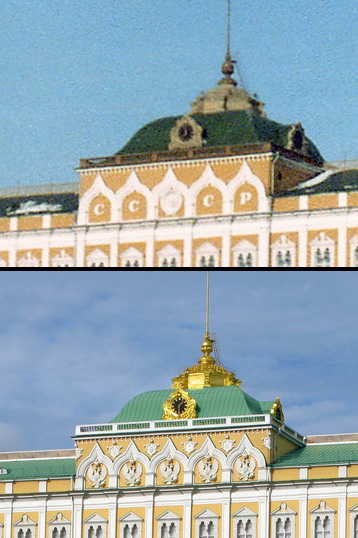 The break-up of the USSR, also referred to as the dissolution of the USSR, break-up of the USSR, collapse of the USSR, or fall of the USSR, occurred on December 26, 1991 when the Supreme Soviet of the Soviet Union and the Soviet of the Republics of the Supreme Soviet of the Soviet Union, by declaration No. 142-N (N Н in Russian) created the Commonwealth of Independent States (CIS) and officially recognized the separation, which had taken place in the preceding months, of the republics of the Union of Soviet Socialist Republics (USSR), thus formally recognizing the demise of the Soviet Union as a state and subject of international law. The day before, on December 25, Soviet President Mikhail Gorbachev, the eighth and last leader of the USSR, had resigned, declaring his position abolished and transferring his powers, including control of nuclear missile launch codes, to the President of the Russian Federation, Boris Yeltsin. That evening, at 7:32 p.m., the Soviet flag was lowered for the last time from the Kremlin and was, at dawn the following day, replaced by the pre-revolutionary Russian flag. Previously, from August to December, the fifteen Soviet republics, including Russia, had seceded from the Soviet Union and thus denounced the Treaty on the creation of the USSR. The week before the official dissolution, eleven republics signed the Alma-Ata Accords officially establishing the CIS and declaring that the USSR had ceased to exist. The 1989 revolutions and the dissolution of the USSR also marked, for more than twenty years, the end of the Cold War. Several of the former Soviet republics, such as Belarus, Ukraine, Moldova, Armenia and the Central Asian Five maintained close ties with the Russian Federation and formed multilateral organizations such as the CIS, the Eurasian Economic Community , the Union of Russia and Belarus, the Eurasian Union Customs Union and the Eurasian Economic Union to strengthen economic and security cooperation. On the other hand, the Baltic countries joined NATO and the European Union.

Mikhail Gorbachev was elected General Secretary of the Politburo on March 11, 1985, three hours after the death of his predecessor Konstantin Chernenko at the age of 73. Gorbachev, 54, was the youngest member of the Politburo. His original goal as General Secretary was to revive the Soviet economy, and he realized that this would require reform of the underlying political and social structures. Reforms began with personnel changes among top officials of the Brezhnev era, which would hamper political and economic changes. On April 23, 1985, Gorbachev brought two of his proteges, Egor Ligachev and Nikolai Ryzhkov, into the Politburo. He contented the "power" ministries by promoting KGB chief Viktor Chebrikov from candidate to full member and appointing Defense Minister Marshal Sergei Sokolov as a Politburo candidate. This liberalization favored the emancipation aspirations of the Soviets which, in reaction to the decades of Russification suffered, quickly took the form of nationalist movements, generating ethnic conflicts within the Soviet Union. It also fostered, more indirectly, the 1989 revolutions in Eastern Europe, where the Warsaw Pact communist regimes imposed by the USSR were peacefully overthrown (with the exception of Romania), which increased the pressure on Gorbachev to establish greater democracy and greater autonomy for the constituent republics