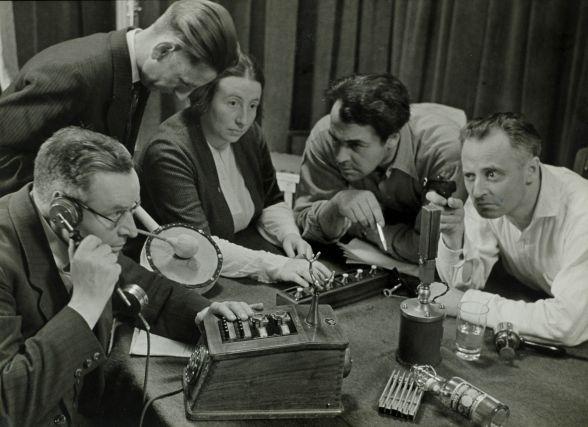 Radio drama or sound drama is a form of radio (and / or sound) expression distinct from radio theater in that it may involve aspects of radio creation that cannot be reproduced on stage. The term replaced that of radio theater in the early 1950s. The mixing of the soundtrack, for example the descaling (sound spatialization effect obtained by filtering the treble popularized by the French touch) but also the ellipse and parallel editing, elements of cinematographic language, can be used in radio dramas, whether serial, serial or, in the case of radio drama proper, equivalent to feature film.

An internationally famous example of radio drama is Orson Welles' War of the Worlds in 1938. It alternates between musical passages, pseudo-interviews, silences, and sound effects. The dramatic tension is due to the hijacking of radio codes such as jingles and announcements of announcers. In the 1990s, sound drama was only audible in France on France Culture. In 1951, the first series was broadcast on the BBC: The Archers, a series still broadcast in 2017, which has 17,000 episodes to date. Recently, shows such as Panique au Mangin Palace on France Inter, using sampling techniques, revived with Signé Furax. [Ref. desired]

Evolution after the year 2000

In the 2000s, the rise of the internet and podcasting brought the genre back to life. The keep of Naheulbeuk is a typical MP3 saga of this revival. It is also with the rise of the Internet that France Culture is surprised by the success of audio fictions and increases the production of audio fictions after many decades of decline. In 2008, the SGDL radio drama grand prize was created. In 2017, France Culture created the Native Fiction Podcast Fund, several of which were created in "3d sound" exceeding one million downloads. Audio fiction is also becoming an issue for audio streaming platforms.

The production of audio fictions calls upon various literary or technological processes such as: "3D sound" by binaural sound or by descaling (sound spatialization effect obtained by treble filtering popularized by the French touch) Mixing the soundtrack sampling parallel mounting the ellipse

Audio dramas around the world

In Germany: the Hörspiel

Hörspiel means radio play in German. It is experiencing greater growth in Germany than in France. The number of existing prizes provides an overview: no less than 33 prizes only in Germany. Music holds an important place there: composers are very often called upon to compose the music. Sometimes, like Ulrike Haage, composers also become producers, that is, they direct the actors, musicians, singers and they do the audio editing.