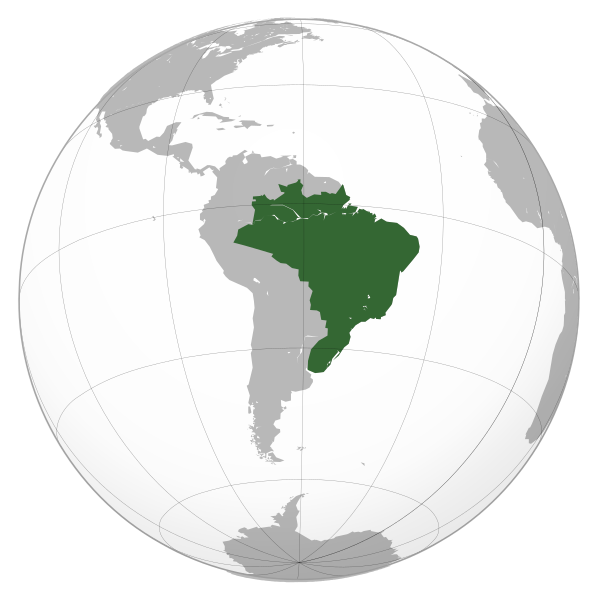 The Empire of Brazil (in Portuguese: Império do Brasil) or, abusively, the Brazilian Empire is a political entity which occupied, in the 19th century, substantially the territories which constitute present-day Brazil. It was then a parliamentary and representative constitutional monarchy whose successive sovereigns were Emperors Peter I and Peter II, both members of the House of Braganza, a branch of the thousand-year-old Capetian dynasty. First a colony of the Kingdom of Portugal, Brazil became the seat of the Portuguese colonial empire in 1808, when the future King John VI, then regent of Portugal, fled his country after its invasion by the troops of Napoleon I. . The royal family then moved with its government to the Brazilian city of Rio de Janeiro. A few years after the liberation of Portugal, Jean VI returned to Europe in 1821, but left his eldest son and heir, the Infante Pierre, at the head of Brazil as regent. On September 7, 1822, Prince Peter declared the independence of Brazil and, after a victorious war against the kingdom of his father, he was proclaimed the first emperor of Brazil on October 12 under the name of Peter I. The new country is huge, but sparsely populated and ethnically diverse. Unlike neighboring Hispanic republics, Brazil enjoys a degree of political stability, relative freedom of expression and respect for civil rights. It is also experiencing dynamic economic growth. Its bicameral Parliament, as well as the provincial and local legislatures, were elected according to democratic methods for the time. Despite everything, a long ideological conflict opposes the emperor and an important fraction of the Parliament on the role of the monarch in the government. Peter I also experienced other problems: the failure of the Cisplatine war against the United Provinces of the Río de la Plata led to the secession of a province from Brazil (which later became Uruguay) in 1828. Despite his role in the independence of Brazil, Peter I became King of Portugal in 1826 but immediately abdicated in favor of his eldest daughter, Mary II. Two years later, the Portuguese throne was usurped by the Emperor's younger brother, Michael I. Unable to simultaneously manage Brazilian and Portuguese affairs, Peter I abdicated on April 7, 1831 and immediately left for Europe to restore his daughter to Lisbon. His successor in Brazil is his son Peter II, only five years old. As the latter was still a minor, a regency was set up but his authority soon showed its limits. The power vacuum resulting from the absence of a ruling monarch as the final arbiter in regional political disputes leads to civil wars between local factions. Having inherited an empire on the verge of disintegration, Peter II, once declared of age, succeeded in bringing peace and stability to the country which ended up becoming an emerging power on the Latin American scene. Brazil then won three international conflicts (the Plata War, the Uruguayan War and the Paraguayan War) under his leadership and played a predominant role in several other international conflicts and internal disputes. With prosperity and economic development, the country experienced an influx of European immigrants, particularly Italians and Portuguese, but also Germans and Jews. Slavery, which was initially widespread, was restricted by successive laws until it was finally abolished in 1888. The visual arts, literature and theater flourished during this period of progress. Although strongly influenced by European styles ranging from neoclassicism to romanticism, each contribution is adapted to local designs to create a culture unique to Brazil. Although the four