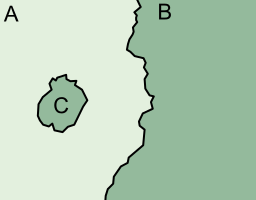 An enclave is a territory, or piece of territory (in this case an exclave of its main territory), completely surrounded by a single other territorial entity. An example is the independent state of Lesotho landlocked in South Africa. We also say figuratively, still in the field of geography, that a city or a region is "landlocked" when it is isolated, far from any major transport axis, as Corsica or such alpine valley. We can also speak of “landlocked territory” for territories that do not have access to the sea, such as Austria. An exclave is, in human geography, a piece of territory under the sovereignty of a country, from the main territory of which it is separated by one or more countries or seas. A historical example is the territory of West Berlin — landlocked in the territory of East Germany — which was an exclave of West Germany. Enclaves and exclaves also exist at a level less than that of a country (for example at the level of the region), when an administrative subdivision (of a country) is located outside its "mother" division (at which it is attached). For example, in France, the canton of Valréas is an enclave attached to the department of Vaucluse, an enclave which is physically located in the department of Drôme.

The word enclave comes from the Latin inclavatus meaning “locked up”. The word exclave has been attested in French with this meaning since at least 1888.

In some cases, two landlocked parts of the same territory cannot be qualified as being an exclave of the other, neither having supremacy over the other (for example the territory defines two joint capitals, one in each slave). Each part of this territory is then designated as an exclave, no part of this territory having a common border with another (or only isolated common points, a fairly rare case but found mainly on certain mountain peaks or at the confluence of several rivers, on which it was impossible to define which territory possessed this point and a small area around it). Similarly, an enclave in an external territory does not normally share any common border with the external border of that external territory; but it happens that there are one or more common points on these two borders when it has been impossible to determine to which territory these points belong (and a small area all around each common point) where the enclave touches the external border of the external territory. In any case, a territory cannot be both an enclave and an exclave of the same territory. No part (of non-zero area) of an enclave can be an exclave of the same territory — and vice versa — which means that the borders of these territories do not cross (but they can touch each other locally in one or more isolated points), one of them having its surface totally included in the surface closed by the outer boundary of the other. If two territories have a common border of non-zero length, they are neither enclaves nor exclaves, they are only "adjacent" (we also say "bordering"). However, we sometimes also speak of enclaves and exclaves according to other geographical criteria than the only administrative and territorial limits. Thus we can distinguish land enclaves for regions or countries without access to the sea (for example Austria is landlocked in the Eurasian continent), or for seas completely surrounded by the land of a continent (for example the sea Caspian forms an enclave of the Eurasian continent). Islands are often exclaves of another land territory (continental or