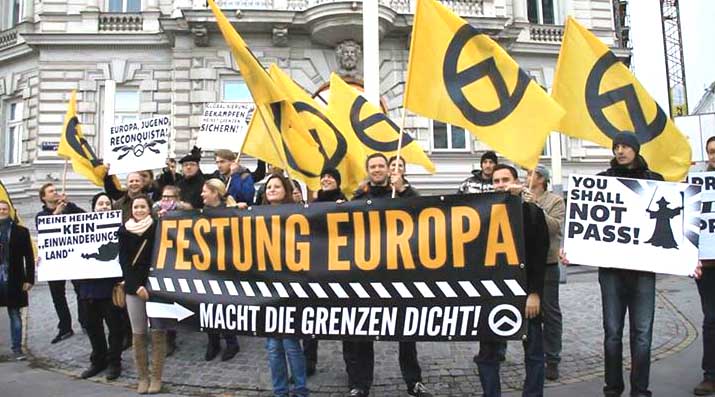 The term extreme right is used to classify movements, organizations and political parties placed most to the right of the political spectrum and historically disposed to the extreme right of parliamentary hemicycles. The question of its delimitation provokes debate, but several uses are distinguished. At the start of the 20th century, the extreme right was, for example, represented by a movement such as Action Française, nationalist and royalist, which defended a racist and anti-Semitic doctrine. Those who claim these ideas today are still listed there. Additionally, the term is associated with movements defeated by WWII, such as Italian fascism and German Nazism. Nowadays, parties such as the National Rally in France, the Northern League in Italy or the Freedom Party of Austria are commonly classified on the far right. The qualifier "extreme right" can be used in a stigmatizing and pejorative way by its political opponents by equating all its tendencies with fascism and Nazism. As the political scientist Jean-Yves Camus points out, in France, the term is hardly ever assumed by those who are part of it, they preferring, like the National Rally, the terms of “national right” or “national movement”. ".

The passage of the expression “extreme right” from common political usage to the vocabulary of political science partly explains the difficulties of definition: as Cas Mudde points out, in addition to its descriptive categorization function, the term also fulfills in usage. common a function of delimiting a "political enemy". Anglo-Saxon political science speaks more readily of the radical right [insufficient source], meaning that it is situated at the limit of the democratic, liberal or conservative right. To distinguish itself from the extreme right, the traditional right has historically maintained a refusal of alliance, an illustration of which is the “cordon sanitaire” in Belgium. This policy has been called into question for several years: in certain countries, such as Austria or Israel, alliances have sometimes been formed. At the end of 2018, a regional election in Spain saw the Popular Party conclude a remarkable double alliance, on the one hand with Ciudadanos, on the other with Vox, a small far-right party which had just made a notable electoral breakthrough. In February 2020, it was in Germany that an alliance between the governing parties FDP and CDU and the far-right AfD caused an outcry, leading to resignations and demonstrations. Some far-right movements may be linked to the classical right, but ended up being classified as far right due to radicalization (eg the Hungarian Fidesz). Other far-right movements appear to have no connection with classical right-wing movements, such as the anti-capitalist far-right factions. The latter turn out to be more radical and sometimes in conflict with radicalized conservative right-wing movements [ref. necessary]. Certain personalities or political structures can evolve considerably, as illustrated in Italy by the trajectory of the Italian Social Movement (neo-fascist) which has become the National Alliance (center-right). In France, Alain Madelin, Gérard Longuet, Patrick Devedjian and Hervé Novelli are right-wing political figures who began their involvement in the far-right movement West.

Differences between the right extremes

There are many differences between the extreme right-wing, especially on the economic level, some factions are liberal while others are socializing. The relationship to religion: Some movements are favorable to the presence of religion in society, others are