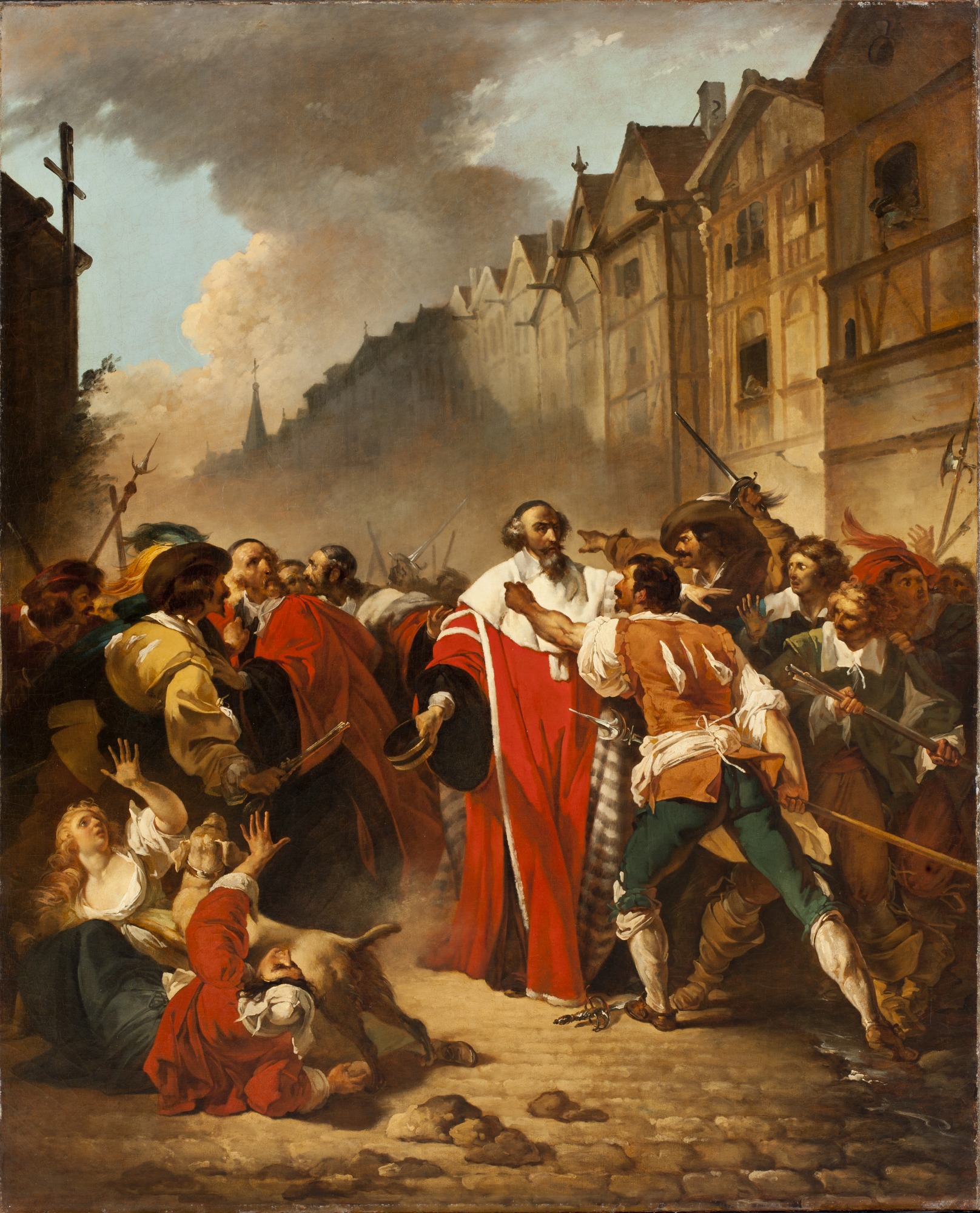 The Fronde (1648-1653), is a period of serious troubles that hit the kingdom of France then in full war with Spain (1635-1659), during the minority of King Louis XIV (1643-1651). This period of revolts marks a brutal reaction to the rise of monarchical authority in France begun under Henri IV and Louis XIII, reinforced by the firmness of Richelieu and which will reach its peak under the reign of Louis XIV. After the death of Richelieu in 1642, then that of Louis XIII in 1643, the royal power was weakened by the organization of a period of regency, by a difficult financial and fiscal situation due to the levies necessary to fuel the Thirty Years' War. , as well as by the spirit of revenge of the greats of the kingdom subjugated under the grip of Richelieu. This situation provoked a conjunction of multiple parliamentary, aristocratic and popular oppositions. It is very difficult to define precisely the chronological limits of the Fronde. Historians have differing opinions on the matter. It is common, however, to propose as a starting point the date of June 15, 1648, which is marked by the declaration of the twenty-seven articles following the Union judgment of May 13. This declaration made to the Parliament of Paris sets out the limitation of the powers of the sovereign. The submission of the city of Bordeaux, August 3, 1653, is considered the event that ends the troubles of the Fronde. The timeline is complex due to multiple events and reversals of alliances. Historiography has become accustomed to distinguishing several phases: the first corresponds to the opposition of the sovereign courts (parliamentary sling, 1648-1649), the second to the opposition of the Great (sling of the princes, 1651-1653). As such, it can be considered the last great noble revolt of the 17th century.

On the death of Richelieu (1642), then of Louis XIII (1643), France had been at war since 1635 with Spain. This has been a traditional policy since the end of the 15th century of weakening the House of Austria - successors to the Dukes of Burgundy - whose bordering possessions encircle the kingdom of France. The Thirty Years' War will end after four years of negotiations on the eve of the Fronde at the Treaty of Westphalia (1648), while the Franco-Spanish War will theoretically continue until the Treaty of the Pyrenees (1659). This first half-century marked the abasement of the Habsburgs, the victim of Dutch, Catalan, Neapolitan and Portuguese revolts, while Richelieu and Louis XIII, after the long wars of religion, began in France the strengthening of a State which relied on the centralization and absolutism. On the other side of the Channel, it is an opposite evolution which we are witnessing where the absolutism of Charles I comes up against the revolt of Parliament. These events will be present in the minds of the actors of the Fronde, especially since Queen Henriette, sister of the late Louis XIII, had to take refuge in France in 1644. They can explain certain attitudes, in particular the stubborn resistance of the queen mother. Anne of Austria. On the national level, the Parliament and the nobility, subjugated during the previous reign, aspire to play a more important role, especially as the sovereign court seems encouraged by the regent forced to go through her to break the will of Louis XIII. in order to obtain full regency. Little experienced in political affairs, Anne of Austria will rely on Mazarin whose appointment will arouse some jealousy among the princes. After the "grace period", the malcontents will try to exploit for their benefit the increasingly delicate position of a government of regency. France is the most populous country in Europe: 19 million inhabitants