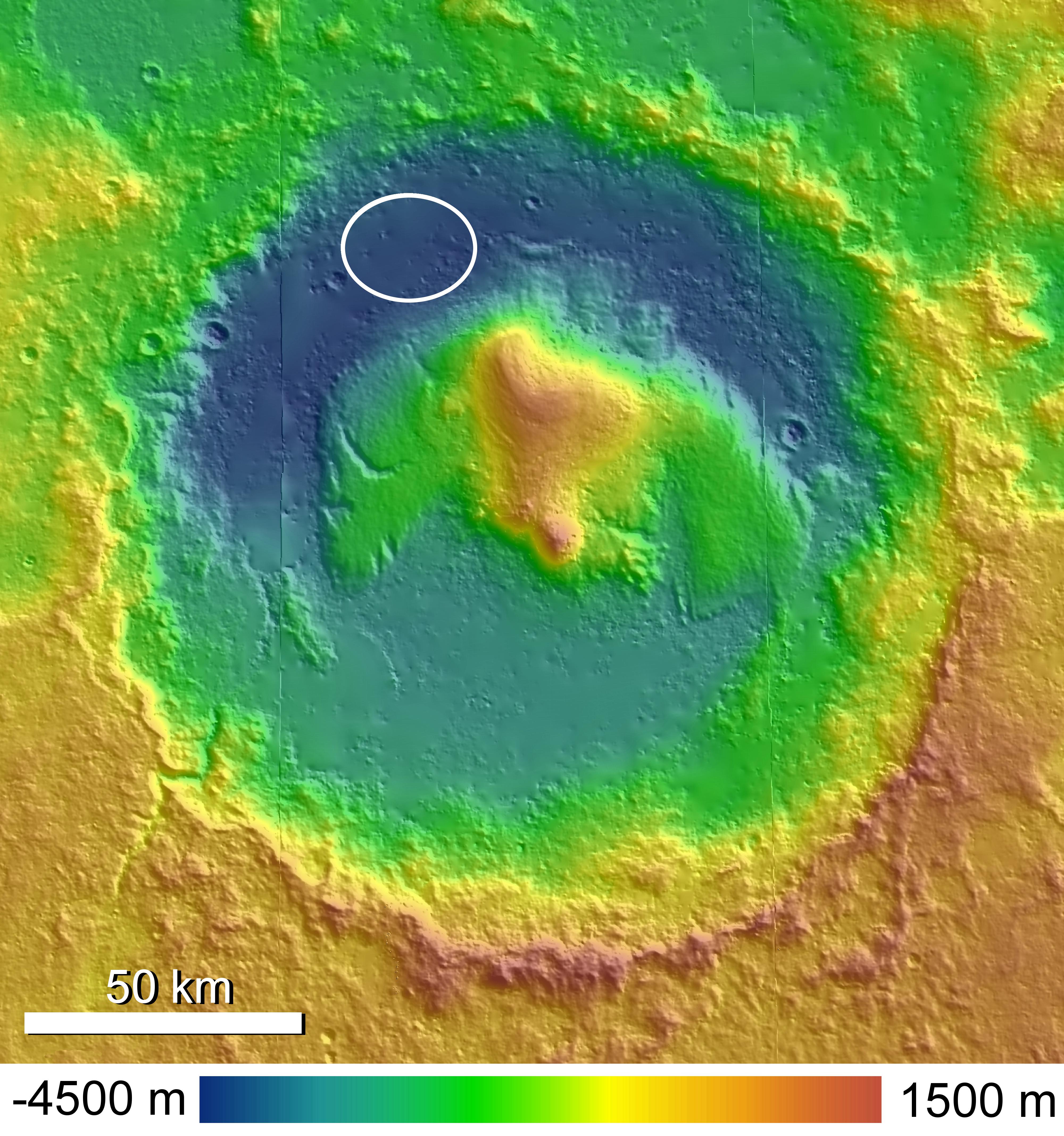 Gale is an impact crater about 155 km in diameter located on the planet Mars in the quadrangle of Aeolis, at the geological limit materializing the Martian crustal dichotomy, by 5.4° S and 137.7° E, in the Aeolis Mensae region. It is particularly recognizable by its imposing central mound, first called Mont Sharp, then officially renamed Aeolis Mons, more than 5,000 m high above the plain at the bottom of the crater, called Aeolis Palus, and culminating at around 700 m above the Martian reference level, i.e. higher than most other landforms in the vicinity, and more than 2000 m above the average elevation of the crater rims. This crater, selected by NASA in July 2011, was chosen as the landing site for the Curiosity rover of the Mars Science Laboratory mission, launched on November 26, 2011; Curiosity landed on Mars on August 6, 2012 as planned.

Gale crater lies south of Elysium Planitia, northwest of Terra Cimmeria and on the edge of Aeolis Mensae. Located at the limit between the highlands of the southern hemisphere and the low plains of the northern hemisphere, this area is also surrounded by quite distant volcanoes, Elysium Mons to the north, Tyrrhena Patera to the southwest and Apollinaris Mons to the 'is. It is also located at the western end of the formation of Medusae Fossae, a large and rather enigmatic structure made up of lobed mounds with an undulating surface which recalls in certain aspects the central formation of the Gale crater. The dating of the Gale crater gives ages of the order of 3.8 to 3.5 billion years, which places its formation at the end of the Noachian, with a particularly complex subsequent geological history. The central mound has a stratified structure that would have formed over at least 2 billion years as a result of processes involving the sustained action of large quantities of liquid water. The current structure would also be only the residue of a sedimentary layer extending over the entire surface of the crater - or even beyond - and which would have undergone the sustained wind erosion observed elsewhere throughout the region. The wind would not be the only cause, however, and other complementary processes must also be considered. The materials constituting this mound are undoubtedly quite fragile, because it is crossed by multiple notches by which it crumbles, but without ever allowing large blocks to appear. Gale was selected in 2003 by NASA to drop off the Spirit rover there, before being discarded in favor of the Gusev crater because of its topography making landing in this area too uncertain with the technology of the time.

Several notable components are found in the Gale crater: Aeolis Mons, the central peak; the dunes of Bagnold, dark dune field located on the northwest flank of Aeolis Mons, named after Ralph Alger Bagnold: in particular, the Namib Dune, a 4 meter high dune.

Due to its particular lacustrine history, the low plain of Aeolis Palus in the Gale crater is the landing site chosen for the Curiosity rover of the Mars Science Laboratory mission, which landed there on August 6, 2012. This mission aims to determine the past and present habitability of Mars, and therefore to identify possible traces of past life; for this reason, its exploration site must a priori have been the most conducive to life and the preservation of its possible traces. The landing ellipse envisaged for MSL is this time to the northwest of the central mount, Mount Sharp, contrary to that which had been envisaged[clarification needed] for