George I (King of the Hellenes) 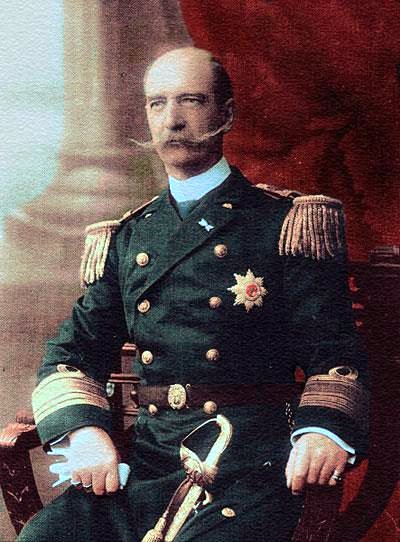 George I of Greece (in modern Greek: Γεώργιος Αʹ της Ελλάδας / Geórgios I tis Elládas), by his election King of the Hellenes, was born William of Schleswig-Holstein-Sonderburg-Glücksburg, Prince of Denmark, on December 24, 1845 in Copenhagen, in Denmark, and died on March 18, 1913 in Thessaloniki, Greece. Second ruler of modern Greece and founder of the contemporary Hellenic royal dynasty, he reigned for almost fifty years, from 1863 to 1913. Second son of the future Christian IX of Denmark, Prince William joined the Royal Danish Navy as a teenager. Elected King of the Hellenes at the age of seventeen, he took the name George I and settled in his new country in 1863. Wishing not to make the same mistakes as his predecessor, King Othon I, the young monarch does not take long to become Hellenized and to meet his subjects. Still young and inexperienced, George I was faced with a very difficult internal situation. When he came to power, the Greek political scene was indeed divided and serious financial problems shook the country. Nationalist agitation is also very strong and the Big Idea, in other words the desire to unite all Greeks in one and the same country, is at the heart of national politics. The reign of George I was therefore largely marked by the expansionist desires of the Hellenic population and by the annexation, sometimes peaceful, sometimes violent, of several provinces mainly populated by Greeks: the Ionian Islands (1864), Thessaly (1880) and especially Macedonia, Epirus and Crete (1913). Despite everything, the king's policy was far from always crowned with success and national humiliations (as when the great powers organized a blockade against the country in 1885) and serious military defeats (as during the Greco-Turkish War of 1897) also punctuate his reign. Moreover, despite the respect he shows for the parliamentary system set up by the 1864 constitution, the sovereign is periodically the target of criticism from the political class and the army. The coup de Goudi (1909), which allowed Elefthérios Venizelos to enter Greek political life, was thus one of the most complicated moments in the life of the monarch. On a more personal level, George I, who remained a Lutheran until his death, married the Orthodox Grand Duchess Olga Constantinovna of Russia in 1867. Very united, the couple gave birth to eight children, with whom the sovereign maintained close but sometimes stormy relations. Through them, the king is the ancestor of several European rulers and pretenders. George I was assassinated in Thessaloniki by a madman named Aléxandros Schinás in 1913, and his son Constantine I then succeeded him on the throne of Greece.

George I is the third child and second son of King Christian IX of Denmark (1818-1906), nicknamed the "Father-in-law of Europe", and his wife Princess Louise of Hesse-Cassel (1817-1898) . He is therefore the brother of many European monarchs and pretenders: King Frederick VIII of Denmark (1843-1912), Queen Alexandra of the United Kingdom (1844-1925), Tsarina Maria Feodorovna of Russia (1847-1928) and the Princess Royal Thyra of Hanover (1853-1933). On October 27, 1867, King George I married, in Saint Petersburg, Grand Duchess Olga Constantinovna of Russia (1851-1926), daughter of Grand Duke Constantin Nikolayevich of Russia (1827-1892) and his wife Princess Alexandra of Saxe-Altenburg (1830-1911), who became, after her conversion to Orthodoxy, Grand Duchess Alexandra Iosifovna of Russia. Granddaughter of Tsar Nicolas I of Russia (1796-1855), Princess Olga was born in the Orthodox religion while her husband remained a lute