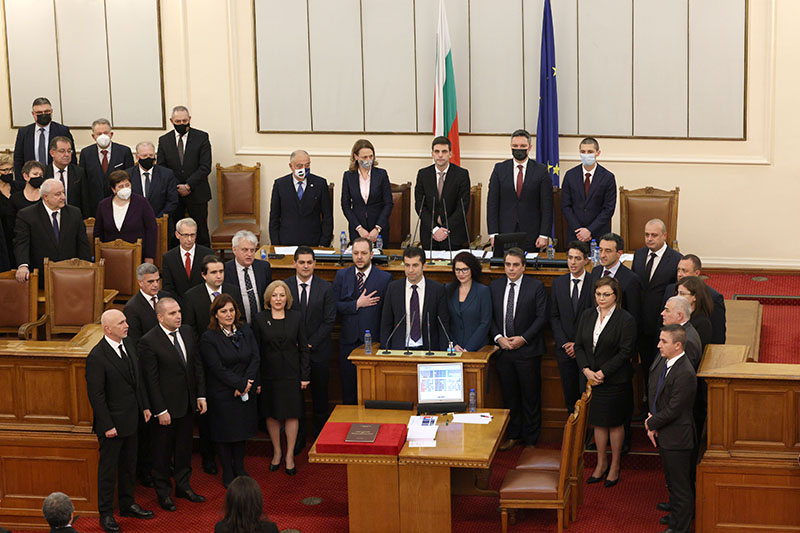 The Petkov government (Bulgarian: Правителството на Кирил Петков) has been the 99th government of the Republic of Bulgaria since December 13, 2021, under the 47th legislature of the National Assembly. It is led by the centrist Kiril Petkov, after the victory of the PP by relative majority in the November 2021 legislative elections, and is based on a coalition of four parties. He succeeds the second government of technocrat Stefan Yanev. The coalition broke up in June 2022, leading to the adoption of a motion of no confidence.

This government is led by the new centrist Prime Minister Kiril Petkov, formerly Minister of Economy in the Yanev I government. It is formed and supported by a coalition between We Continue Change (PP), BSP for Bulgaria (BSPzB), He there is such a people (ITN) and Democratic Bulgaria (DB). Together, they have 134 deputies out of 240, or 55.8% of the seats. It was formed following the early legislative elections of November 14, 2021. He succeeds the second government of technocrats of Stefan Yanev, invested after the failure of the political forces to form a full-fledged government following the elections of July 11, 2021.

During the election, the centrist and anti-corruption party We continue the change unexpectedly beat the centre-right Citizens for the European Development of Bulgaria (GERB) party of former chief executive Boyko Borissov. In order to have a majority to govern, he is obliged to join forces with three other political formations, BSP for Bulgaria, There is such a people and Democratic Bulgaria, whose programs are not necessarily compatible in economic matters, social, or diplomatic. A week later, the outgoing President of the Republic Roumen Radev was re-elected in the second round of the presidential election with approximately two thirds of the votes; drawing his popularity from his denunciation of corruption, his victory reinforces that of PP in the legislative elections. On November 23, the first exchanges between the four political formations begin, taking the format of thematic discussions led by experts from each party. They end five days later, after eighteen separate meetings. During the constitutive session of the 47th legislature on December 3, the deputy of We continue the change Nikola Minchev is elected president of the National Assembly by 158 votes for and 72 against. The day after this parliamentary session, the co-founder of PP Assen Vassilev indicated that the objective of his training was to have an operational government the following week. He let it be known on December 9 that the coalition contract could be ready as early as December 10. Indeed, a 140-page agreement that focuses the work of the executive on the fight against corruption, the reform of justice and the modernization of the health system is initialed the next day by the four parties, allowing the investiture of the new cabinet from December 13. Prior to this, Kiril Petkov formally received on December 11 the mandate to form the new Bulgarian government, handed over by President Radev, to whom he immediately returned the ministerial structure and the list of ministers of the team he intended to form. He presented the composition of his government team to the press a few hours later, during an event organized at the headquarters of the National Assembly, and insisted on the fact that his four-year mandate would be placed under the slogan "Zero tolerance for Corruption ". On December 13, the government receives the confidence of the Assembly by 134 votes for and 104 against.

Following Russia's invasion of Ukraine, which he downplays and calls "op�