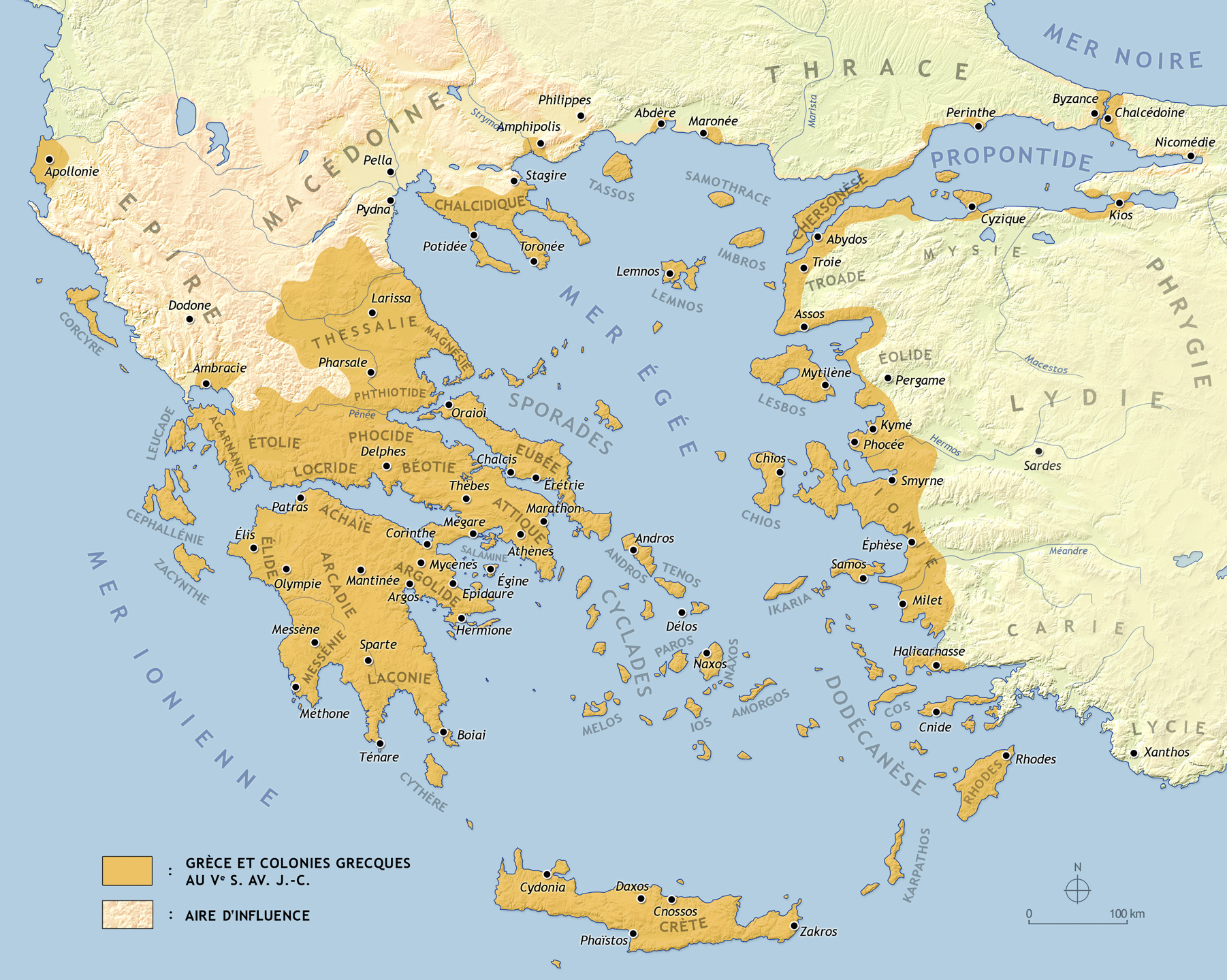 Ancient Greece is a civilization of antiquity of peoples of Greek language and culture developed in Greece and in the western part of Asia Minor, then, following several phases of expansion, in other regions of the Mediterranean basin (Cyprus, Sicily, southern Italy, Egypt, Cyrenaica) and the Near East (Syria, Palestine), constituting settlement points as far as Spain to the west and Afghanistan (Bactria) to the east . This civilization of Greek culture develops during the last part of the "dark centuries", from the rubble of the Mycenaean civilization, and takes shape in particular during the archaic period (v. 800-480 BC). , and developed fully during the Classic period (480-323 BC) and the Hellenistic period (323-31 BC). The Roman conquest (between 220 and 31 BC) marked the end of Greek political independence, but ancient Greek culture retained real dynamism under Roman domination, gradually evolving towards Byzantine civilization from the 4th century. century. From the archaic period and more strongly during the classical period, Greece saw the development of an innovative civilization in many aspects, which stood out from the oldest ancient civilizations of eastern countries, and began a phase of maritime expansion (Greek colonization). Within the city (polis) a very dynamic political, social and cultural life is set up, supported by several centers (Ionia, Athens, Sparta, Syracuse), in a context marked by numerous conflicts between cities where a specific art of war on which it subsequently relied for its expansion. The Greek cities developed original political forms (such as tyranny and democracy), had a dynamic religious life with very marked local aspects while recognizing a group of divinities and Pan-Hellenic sanctuaries, their citizens gave birth to a varied literature (epics, myths, poetry, stories, etc.), reflections on the world and life in society within the framework of philosophy, also a development of sciences and techniques, and artistic and architectural achievements freeing themselves from oriental models to become in turn references, from which comes their "classic" status. The setbacks of this dynamism are the existence of numerous destructions created by wars and inequalities running through civic societies, excluding women from political responsibilities and often based on the existence of a large population with the status of slave or addicted. The ancient Greek civilization exerted a considerable influence in the ancient world, in particular after the conquests of Alexander the Great and during the Hellenistic period when it dominated and influenced the civilizations of the Middle East, where important centers of Greek culture (Alexandria, Antioch). In the Mediterranean basin, Greek culture played a decisive role, through the influence it exerted on the civilization of ancient Rome, where Greek became the language of knowledge used by the elites, to the point that people speak regularly of "Greco-Roman" culture. It is through this that many of the political and cultural productions of the ancient Greek world played a major role in the development of Western civilization. The Greek world therefore remained very dynamic culturally under Roman domination, and the cities remained the fundamental framework of political and social life. During Late Antiquity (c. 250-700) the Eastern Roman world, of Greek culture, gradually took its autonomy around Constantinople, which became the capital of the Eastern Roman Empire (or Byzantine Empire) and the new pole culture of the Greek world