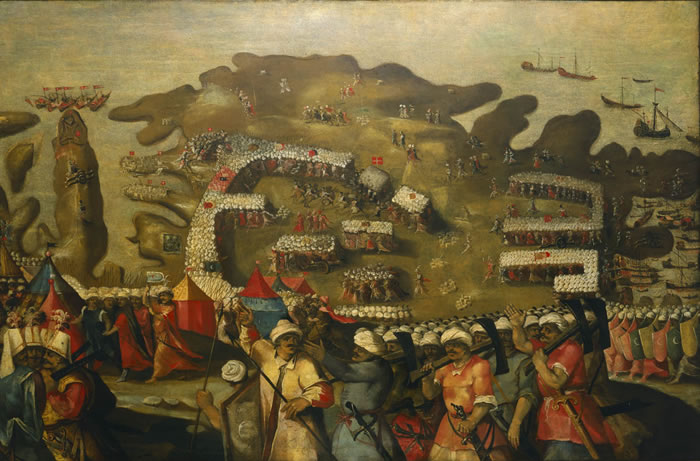 The Great Siege of Malta was led by the Ottomans in 1565 to take possession of the archipelago and drive out the order of Saint John of Jerusalem. Despite their numerical superiority, the Ottomans did not overcome the resistance of the knights and had to lift their siege after having suffered heavy losses. This victory for the Order ensures its presence in Malta and durably strengthens its prestige in Christian Europe. This episode is part of the struggle for domination of the Mediterranean between the Christian powers, notably Spain, supported by the Knights of the Order of Saint John of Jerusalem, and the Ottoman Empire. The knights had been settled in Malta since 1530 after being driven out of Rhodes by the Turks in 1522. Faced with the pirate activities of the knights who harassed Ottoman ships in the Mediterranean and with a view to securing a strategic naval base, Suleiman the Magnificent decides to send his army against the archipelago. At the end of May 1565, a large Turkish force, under the command of General Mustafa Pasha and Admiral Piyale Pasha, landed in Malta and laid siege to the Christian positions. The Knights of the Order, supported by Italian and Spanish mercenaries, and by the Maltese militia, are commanded by the Grand Master of the Order, Jean de Valette. Outnumbered, the defenders took refuge in the fortified towns of Birgu and Senglea, awaiting help promised by King Philip II of Spain. The assailants began their siege by attacking Fort Saint-Elme, which commanded access to a roadstead allowing the galleys of the Ottoman fleet to be sheltered. The knights nevertheless manage to hold this position for a month, causing the Turkish army to lose considerable time and many men. At the beginning of July, the siege of Birgu and Senglea begins. For two months, despite their numerical superiority and the importance of their artillery, the Ottomans saw their attacks systematically repelled, causing numerous losses among the attackers. In early September, a relief army, led by the Viceroy of Sicily, Don García de Tolède, landed in Malta and managed to defeat the Turkish army, demoralized by its failure and weakened by disease and lack of food. The victory of the Knights of the Order of Saint John of Jerusalem had a considerable impact throughout Christian Europe: it gave them immense prestige and reinforced their role as defenders of the Christian religion against Muslim expansionism. The funds raised as a result of this victory are helping to rebuild Malta's defenses and ensure the Order's lasting presence on the island. A new city is also built, in order to defend the peninsula of Xiberras against a possible return of the Turkish armies. First called Citta' Umilissima, it then took the name of La Valette, in homage to the Grand Master of the Order who won the Ottomans. The Ottoman defeat, beyond the human losses, had no significant military consequences. It was, however, one of the rare failures of Suleiman's army, depriving the Turks of a strategic position which would have allowed them to launch numerous raids in the western Mediterranean.

Driven out of Rhodes by the Turks following the siege of 1522, the knights of the order of Saint John of Jerusalem are looking for a fixed and independent place of residence allowing them to continue the privateering war, known as corso, against the Ottomans. Their desire for independence vis-à-vis national powers (members of the Order are exempted from swearing allegiance to their respective sovereigns) does not facilitate their search. However, after the final capture of Algiers in 1529, the Emperor Charles V, worried about the rise of Ottoman power in