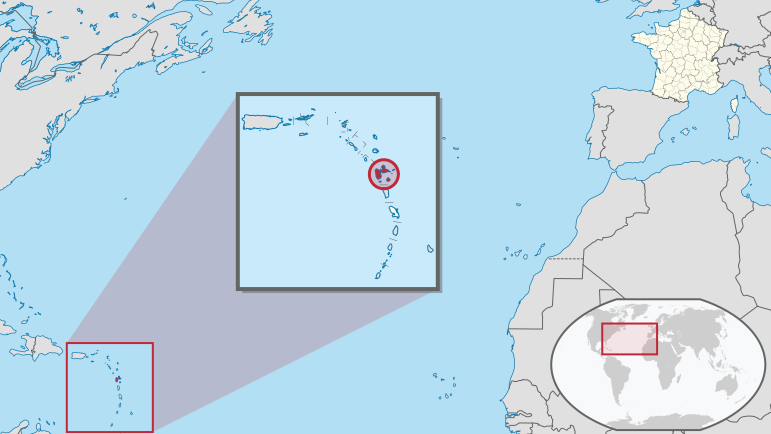 Guadeloupe (in Guadeloupean Creole: Gwadloup) is a Caribbean archipelago made up of seven islands, forming a French overseas region and department. The main part (Karukera in Native American languages) in the shape of a butterfly is made up of two islands: Grande-Terre to the east and Basse-Terre to the west, separated by an arm of the sea, called "the Salty River". . The capital is Basse-Terre and the economic capital is Pointe-à-Pitre. The largest city is Les Abymes. Administratively, Guadeloupe is a French department, a mono-departmental region of the French overseas territories and a European outermost region, of the French West Indies; its official departmental code is “971”. It is a member of the Organization of Eastern Caribbean States (OECS). Guadeloupe, bordered by the Caribbean Sea to the west and by the Atlantic Ocean to the east, is located 575 km north of the coast of Venezuela in South America, 205 km east of Island of Aves, 739 km east-southeast of the Dominican Republic, 2,176 km east-southeast of Miami (USA) and 6,732 km from Paris. The region is made up of several islands and islets: mainland Guadeloupe (Grande-Terre and Basse-Terre) and its dependencies: the island of Marie-Galante, the Saintes archipelago composed mainly of Terre-de-Haut and Terre-de-Bas, La Désirade and uninhabited islands.

Historically, Basse-Terre was first named "Karukera" ("island of beautiful waters", in the Caribbean language) by the Amerindians who inhabit it, and Grande-Terre, "Cibuqueira" ("island of gum trees", in Caribbean language). The Rivière Salée, arm of the sea which separates them cutting Guadeloupe in two, was called "Aboukétoutou" which meant "strait". Christopher Columbus landed there on November 4, 1493 and gave it the name of Guadeloupe in homage to the Virgin Protector of Navigators, Our Lady of Guadalupe. In Spain, in Guadalupe, the Royal Monastery of Santa María de Guadalupe is dedicated to the Virgin of the Navigators. The name of Guadalupe would come from the name of the river which flows in this city, in Arabic wadi-al-lub, which means the "river of black pebbles" or, according to a deformation reported by Ana Castillo, "river of love". . We owe travel agencies the paraphrase “Butterfly Island” inspired by the shape of the two main islands.

Guadeloupe is a territory of the northern hemisphere located in the Caribbean archipelago (or Antilles), between the Tropic of Cancer and the equator. Being part of the Windward Islands (as opposed to the Leeward Islands close to Venezuela), it is positioned at 16°15' North latitude, the same longitude as Labrador and the Falkland Islands, and at 61°35 ' West latitude, roughly that of Thailand or Honduras. The territory shares maritime borders with Barbados, Montserrat, Antigua and Barbuda, Dominica and Venezuela because it is close to the Island of Aves. The channels separating Guadeloupe from neighboring islands are the Guadeloupe Channel (55 km wide) between Basse-Terre and Montserrat and the Dominica Channel (25 km) between Terre-de-Haut and Dominica. Its maritime area includes: 2,881 km2 of inland waters, 6,653 km2 of territorial sea, 90,570 km2 of exclusive economic zone.

Guadeloupe is located on the eastern edge of the Caribbean plate and precisely in a subduction zone where the American plate (to the east) slides and dips under the Caribbean plate (to the west). Basse-Terre and Les Saintes (to the west) are located on the inner arc of the Lesser Antilles arc corresponding to the recent volcanic line. And these two islands arose from the formation of a ch