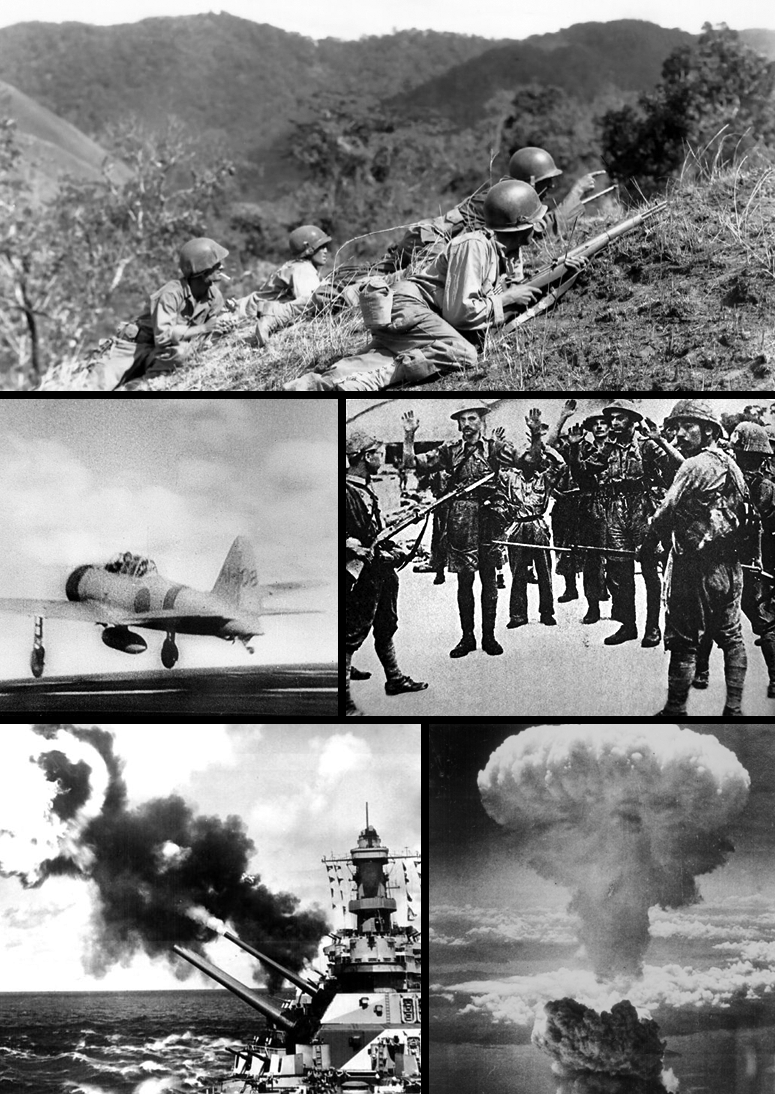 The Pacific War includes the campaigns waged from 1941 in the Asia-Pacific area, as part of the clash between the Allies and the Empire of Japan. Japan's expansionist policy targeted the entire region. This war encompasses all the military operations carried out on the East Asian and Oceanic fronts of the Second World War (theaters of the Central Pacific, the South-West Pacific, South-East Asia, the Second Sino-Japanese War and the Soviet-Japanese War). The term Pacific War is generally used in the West to refer to this set of conflicts, although not all of the countries involved were bordered by the Pacific Ocean and the fighting was not limited to naval operations. From the perspective of the Empire of Japan, this extension of the Sino-Japanese War was officially called the War of the Greater East Asia (大 東 亜 戦 争, Dai tōa sensō). After the war, the term Fifteen Years' War (十五 年 戦 争, Jūgonen Sensō) came into use in Japan, tracing the conflict back to the Japanese Invasion of Manchuria in 1931. The extension of the conflict from its mainland base in China and Indochina began in December 1941, from the official entry into war of the Empire of Japan against the United States, the United Kingdom, the Netherlands Low and Australia. The Japanese experienced dazzling success at the start of the conflict and seized vast territories but were slowly pushed back by American industrial superiority. The Asian theater of World War II is distinguished from the European theater by the major role played by navies in the outcome of the conflict. In contrast, the war crimes of Shōwa Japan have nothing to envy those of Germany. This conflict had important consequences by weakening the European colonial powers which will all experience the phase of decolonization after the war. The war ended with the unconditional surrender of Japan on September 2, 1945.

Rivalry between Japan and China

The roots of the Second Sino-Japanese War go back to the end of the 19th century with a China in political chaos and a Japan in the process of rapid modernization. The latter seized Taiwan in 1895 then Korea in 1910 while extending its economic influence in China and more particularly in Manchuria. At the same time, China is fragmenting into autonomous factions due to the weakness of the central government. This situation favors Japanese expansion. However, Generalissimo Tchang Kaï-chek and his Kuomintang manage to bring together the various local governments as best they can. This strengthening worries the Japanese who organize the Mukden incident in 1931 to justify the invasion of Manchuria and the establishment of a puppet government, Manchoukuo led by Puyi, the last emperor of the Qing dynasty. The Japanese aggressions angered members of the League of Nations that Japan left in 1933. From this moment, the influence of the Chinese Communist Party increases sharply and the latter seizes vast territories in the south-east of the country. Considering that they represent a greater threat than the Japanese, Tchang Kaï-shek launches a series of offensives to dislodge them. Taking advantage of the growing chaos, the Japanese intervened in Shanghai in 1932. In Japan, the aftermath of the Great Depression and a series of coups resulted in the fall of the civilian government and the takeover by the military. However, the military high command exercises only limited control over the various army corps, which sometimes act in their own interests at the expense of the national interest. Emperor Hirohito enjoys a qua