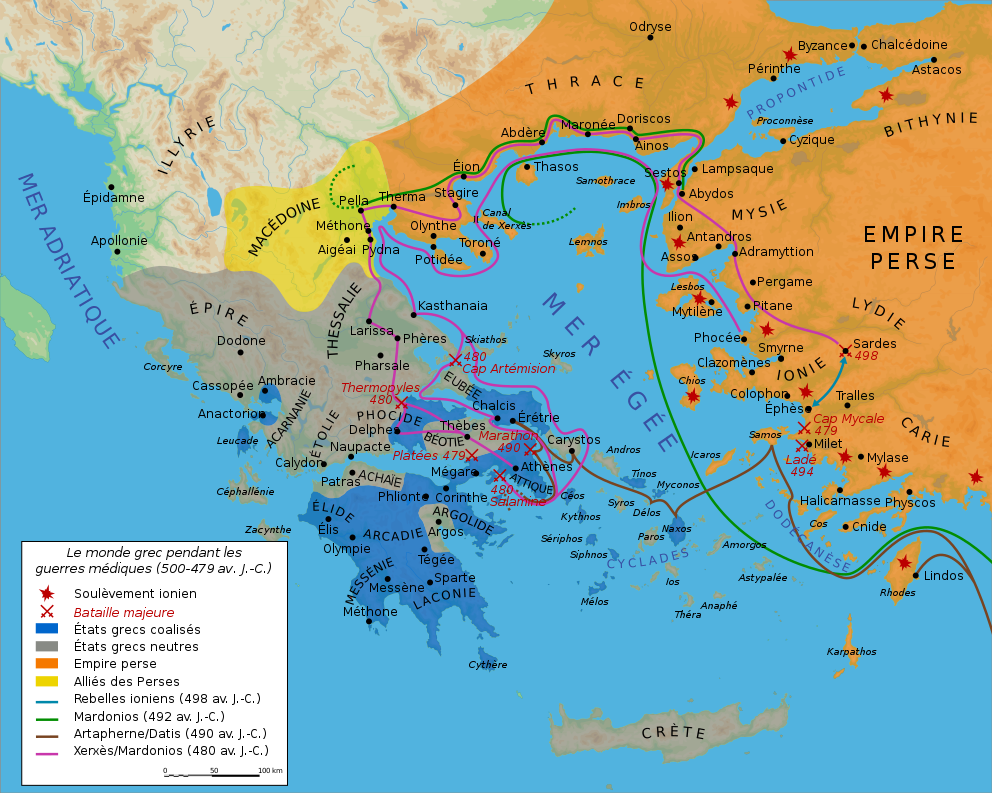 The Persian Wars opposed the Greeks to the Persians of the Achaemenid Empire at the beginning of the 5th century BC. They are triggered by the revolt of the Asian Greek cities against Persian domination, the intervention of Athens in their favor leading to reprisals. The two military expeditions of the Achaemenid sovereigns Darius I and Xerxes I constitute the main military episodes of this conflict; it ends with the spectacular victory of the European Greek cities led by Athens and Sparta. They traditionally mark the transition from the archaic period to the classical period. Even if its scope should not be exaggerated — for the Achaemenid Empire this conflict initially seemed quite peripheral — the Persian Wars appeared as the starting point of Athenian hegemony in the Aegean Sea, but also as the realization of a certain community of interests of the Greek world vis-a-vis Persia, idea which takes again, almost two centuries later, Alexandre the Large one.

The historian who studies the Persian Wars is faced with a major difficulty: he only has Greek written sources and the only exhaustive account is that of Herodotus and his Inquiry. To grasp the real stakes and nature of the clashes, the historian must submit this account to a critical and careful analysis. Herodotus was a Greek born around 480 during the second Persian war in Halicarnassus, a city located in Asia Minor, at the crossroads of the Ionian and Persian worlds. This origin, as well as his numerous travels in the Achaemenid Empire and in the Mediterranean, explains his good knowledge of the two belligerents. His work, known as Histoires or Enquête, is essential for understanding the conflict. Considered the father of history, Herodotus does not content himself with listing the events, he tries to explain the underlying reasons for the war and to give the point of view of the Greeks as well as that of the Persians. This genuine concern for objectivity earned him criticism from certain ancient authors, such as Plutarch, who accused him of preferring the “barbarians” to his own people. Historians took up Herodotus' story on their own until the 1950s. Subsequently, the school of the annals, multiculturalism and above all the progress of Achaemenid studies made it possible to criticize, put into perspective and sometimes even completely rethink cause Herodotus. However, archaeological, anthropological and ethnographic research from the 1990s and 2000s demonstrated Herodotus' accuracy, and his great objectivity. The Athenian Thucydides is the other great historian of the 5th century BC. AD; his History of the Peloponnesian War partially deals with the aftermath and consequences of the Persian Wars. Xenophon, also Athenian, is of the next generation, but he knows the Persians well because he served them as a mercenary during the expedition of the Ten Thousand in 401 (recounted in the Anabasis). Other details are reported by Plato in Book III of the Laws and by later chroniclers like Ephorus, Diodorus of Sicily, Plutarch and Pausanias. The Library of Photius and the Suda, Byzantine compilations from the 9th century, offer glimpses of ancient texts that have now disappeared. The Greek theater includes certain "topical plays" commenting on hot events, and therefore particularly instructive for the study of the mentalities of the time. The Fall of Miletus by Phrynichos, performed in 493, moved the Athenians to tears and exacerbated the passions in favor of war. Aeschylus fought at Marathon and Salamis; his play The Persians, written in 472 and celebrating the Athenian victory, is performed throughout the Greek world, from Sicily to Asia Minor. The Achaemenids left no chronicles or