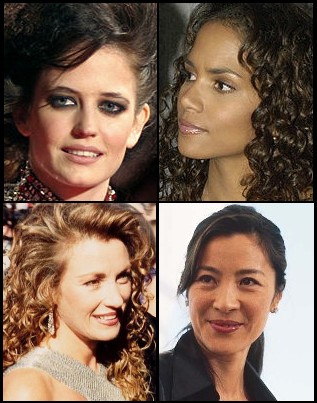 A James Bond girl (pronounced in English / d͡ʒeɪmz bɒnd ɡɜːl /) or simply Bond girl is a female character who has an emotional connection with James Bond, whether in a movie, novel or video game. By extension, we also qualify as "James Bond girl" the actresses who embody these characters. These attractive young women are often spies, victims or criminals encountered by 007 during its various missions. They quickly (with a few exceptions) maintain a romantic and / or sexual relationship with Bond. Not all the women Bond crosses are part of the James Bond girls "club": "M" and Miss Moneypenny, for example, are not usually considered to be James Bond girls.

Almost all of Ian Fleming's novels and short stories include a female character, and sometimes several. Although they have a few unique character traits, the Fleming girls have a lot in common: their age: between 20 and 30, or around ten years younger than Bond; their beauty, which responds to a typical pattern: beautiful faces, tanned or remarkably pale skin, beautiful shapes, a masculine way of behaving; their eroticism: they are often scantily clad, wearing only bikinis and nighties, even completely naked (like Honey in Doctor No); their independence: unlike the women of good society of the 1950s, they do not stay at home but work for the most part; their painful past: Tiffany Case (in) was abandoned by her father and raped at the age of twelve by a gang of thugs, Honey Rider was beaten and raped ... a two-way name: evoking their sexual attraction: from the wise Kissy (from kiss: "to kiss" in English) and Mary Goodnight ("good night" in English), to the more daring Honey Rider (suggesting that she likes to ride) and Pussy Galore (which we can translate as "kitty galore" in Anglo-Saxon slang), or evoking their story: Solitaire excludes men from his life, Vesper Lynd is a deformation of West Berlin and refers to his status as a double agent, Gala Brand is named in honor of HMS Galatea, his father's frigate, while Tatiana Romanova and Ruby Windsor come from imperial dynasties; and finally their ephemeral passage in the life of Bond: a single novel, then very rare allusions in the following ones, even for the only Madame Bond, who does not survive her wedding day. perfect in her fourth novel: “The ideal woman must know how to make Béarnaise sauce as well as love. She must also be gifted with all the usual little talents of society. Golden hair. Gray eyes. A mouth to damn a saint. A perfect body. And of course a great sense of humor, elegance, and dexterity suitable for cards. He expects her, again, that she does not make a mistake when it comes to perfumes like most English women. That she knows how to dress: he loves black dresses especially on tanned skin, not too much jewelry and nails free of varnish. " - Ian Fleming, Diamonds Are Forever

Unlike Fleming's novels, there are many more cinematic James Bond girls, sometimes with four leading characters in a single film. Most of the Fleming girls have also been adapted, but sometimes in a film different from the original story (Solange goes from 007 in New York to Casino Royale; Miranda Frost, copy of Gala Brand, the heroine of Moonraker, is used in an original story adapted from Colonel Sun). On the other hand, the tradition of suggestive names continues and is embellished with additional specimens. These include: Pussy Galore: her first name, pussy, means "