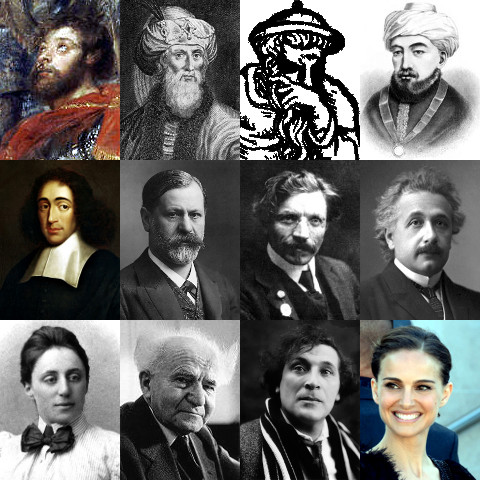 The Jews (Hebrew: יְהוּדִים / yehoudim, in ancient Greek: Ἰουδαῖοι / Ioudaĩoi, in Latin: Iudaei, etc.) are members of a people linked to their own religion, Judaism, and in the broad sense of the term to a ethnicity even non-religious. Jewish tradition links their ancestry to the patriarchs Abraham, Isaac and Jacob also called Israel. They populate Judea and the Kingdom of Israel, structuring their daily lives around the Hebrew Bible, which includes the five Books of the Torah attributed to Moses, the Books of later prophets and other writings. The Bible defines their beliefs, their history, their national identity and legislates in all areas of their lives. As a result of the vagaries of their history, the Jews migrated or were exiled from Judea and settled across the world. Trying to maintain their ancestral way of life among the neighboring populations in which they acculturate, they develop their own religious, culinary and languages ​​traditions as well as other specific traits. Conversely, they exert a certain attraction on their host populations and there are a significant number of conversions to Judaism in the Roman Empire. The impact and proportion of these conversions are debated by historians. Their history spanning more than two millennia is marked by persecutions, both in Christian and Islamic space; in Europe, they peak in the 20th century with the Shoah. The great revolutions of the modern era are causing many of them to lose or abandon all or part of traditional benchmarks. Several attempts are made to redefine them as a confessional, national or cultural entity so that in French, the French Academy distinguishes between the Jews (with a capital letter - "persons descended from the ancient people of Israel" ) and Jews (without capital letters - “people who profess Judaism”). The total number of contemporary Jews is difficult to estimate with precision, and is the subject of various estimates, but according to an estimate made in 2016, it would be around 14.4 million. The majority of them live in Israel and the United States, and the rest mainly in Europe, Canada and Latin America.

Origin of the words Jew and Jew

The Book of Genesis, the first book of the Bible, presents the lineage of the Hebrew patriarchs: Abraham, Isaac, and Jacob who also received Israel as their name and whose descendants formed the group of Israelites; the fourth of the sons of Israel is called Yehouda (Hebrew: יְהוּדָה, related in Genesis 29:35 to the word lehodot, "to thank" or "to recognize"). Biblical Hebrew names יהודי (yehoudi) any Israelite who is a member of his tribe or inhabiting the land which he populates and then any member of his kingdom. The term only became generic in the Book of Esther (4th century BC), designating the nation beyond a tribal affiliation, since Mordecai, who is a Benjaminite, is qualified there " of a man Yehudi "(Esther 2: 5-6), and that it is said that" a great number of the people of the country 'became Yehudim' (mityahadim) because the fear of Yehudim had taken hold of him. 'them' (Esther 8:17). Aramaic uses the word in the form yehoudaï, transcribed Ἰουδαῖος [Youdaïos] in ancient Greek and then IVDÆVS [jûdæus] in Latin. It is on the basis of this Latin word that the French names the patriarch Juda, its territory Judea and its inhabitants the Judeans (academic English uses the term "Judahite" for these ethnic or geographical connotations, Anglicism taken up in French under the "Judaïte" form by Ernest Renan, History of the people of Israel and in the critique made by Théodore Reinach). To distinguish these Hebrew senses