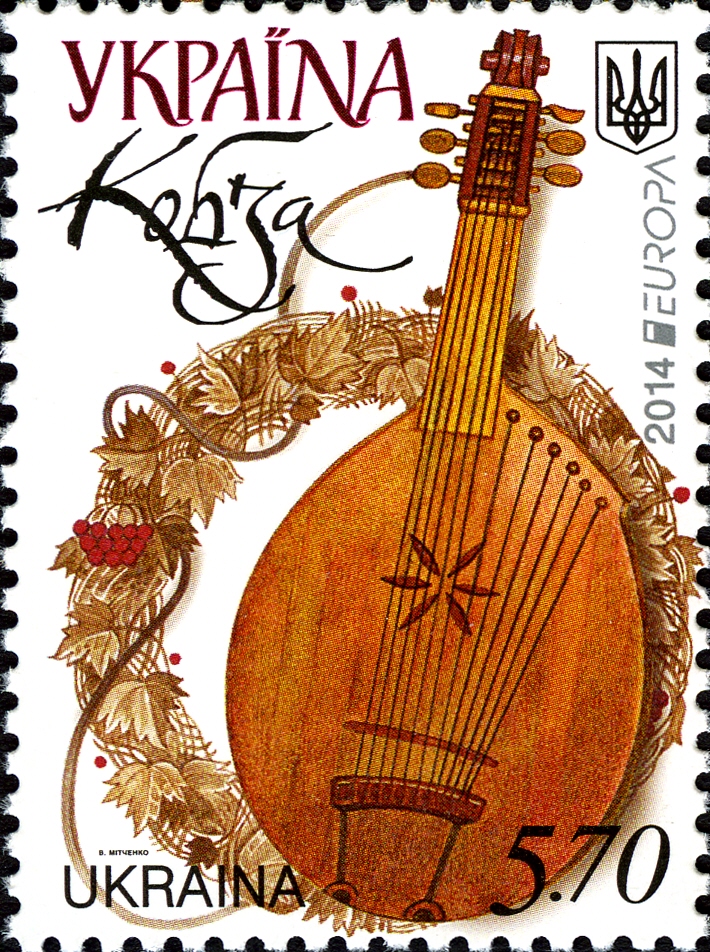 The kobza is an ancient Eastern European musical instrument whose name derives from the Central Asian kopuz and is close to the bandura and the Ottoman oud. The kobza, cobza, kobuza, kobuz or coboz exists in Ukraine, Moldova, Romania and Hungary. Initially, these instruments had symmetrical shapes. In the 18th century, the two terms bandoura and kobza became synonymous in many period documents. The Ukrainian kobza is the largest, it can have up to 24 strings and these are not pressed on frets to change notes. In 1894, the famous Ukrainian kobzar and musicologist, Khnat Khotkievich, devised an asymmetrical shape, which increased the range of notes played. There are several forms of kobzi: the veresai kobza (considered the authentic traditional kobza and so named after the Ostap Veressai kobzar), with six high strings on the left side of the instrument. The latter is played with the left hand which presses on the handle. The neck has no frets; the orchestra kobza, with 4 strings tuned in fifths (like the violin) and several sizes: prima, alto, tenor and double bass; The accompanying kobza, generally having 6 or 7 strings and a fretted neck; the six-string version is tuned like a guitar, and the 7-string version like a Russian guitar. Considered "archaic", the kobzari tradition became marginal during the Communist period (1918-1991 in the Soviet Union, in other communist countries) and most of the kobzi have disappeared: very few instruments remain, like those played by Vassili Litvin. The revival of the kobza is mainly based on the interpretation of iconography or old recordings such as those of musicologist Constantin Brăiloiu. Since the cultural liberation of the years 1989-1991, new Ukrainian kobzas have been built, like those played by Ostap Kindratchouk or Yaroslav Krisko.