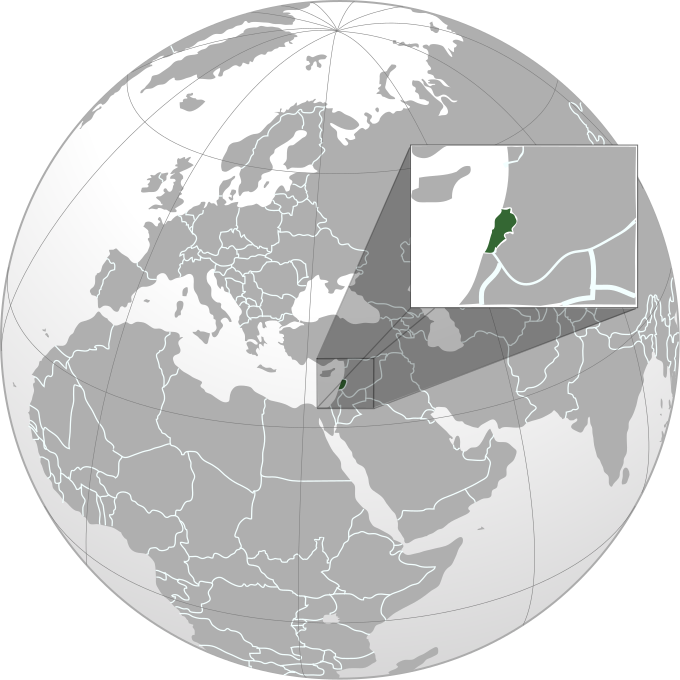 Lebanon (Arabic: لبنان / lubnān), in long form the Lebanese Republic (Arabic: الجمهورية اللبنانية / al-jumhūriyya al-lubnāniyya), is a state in the Middle East. Largely mountainous, it shares its borders with Syria to the north and east over 376 km, Israel to the south over 79 km and Cyprus to the west, off its 220 km of coastline in the Levantine basin (part eastern Mediterranean Sea). Beirut is its capital and largest city. The official language is Arabic. French, having lost this status, is still mentioned in the Constitution: it is a secondary language, still used at the official level, such as on the national currency and on official buildings, as well as in education. The official currency is the Lebanese pound. The constitution of Lebanon is not secular but multi-confessional: the country has a political system based on a distribution of power proportional to the demographic weight of each confession, taken into account as a constituent community in the image of the old system. Ottoman Empire of "religious nations" or "millets". As a geopolitical entity and as it exists within its current borders, the Lebanese State was created in 1920 under the name of "Greater Lebanon" by France (the French High Commissioner in Lebanon was then General Gouraud) by adding to the territory of the moutassarifat of Mount Lebanon (autonomous entity of the Ottoman Empire) of territories which belonged to the two Ottoman wilayets of Beirut and Damascus. France was then, following the dismantling of the Ottoman Empire, mandated by the League of Nations to administer and organize certain ex-Ottoman territories. In 1926, Lebanon adopted its first constitution, officially became a republic, took the name of "Lebanese Republic" and created the posts of President of the Republic and President of the Council of Ministers. Its history, its political system and the variety of its culture, its religious demography and its geography make it a country apart and original in the Middle East. Lebanon, over the centuries, has been part of various civilizations. It is also famous for its gastronomy, its history and its music. Between its independence and the start of the inter-confessional civil war which ravaged it from 1975 to 1990, the country experienced a period of relative economic prosperity and political stability, made possible by the strong growth of the sectors of tourism, agriculture, as well as finance and services (banking, insurance, etc.). In this period, the country is, therefore, considered as the "safe of the Levant" and as the "Switzerland of the Middle East", because of its financial power. Immediately after the end of the civil war, great efforts were made to rebuild the country's infrastructure and a viable economy, through colossal investments from the State, Saudi Arabia, the European Union and the some Persian Gulf countries. Thus, Lebanon's human development index went from 0.677 in 1990 to 0.803 in 2008. In addition, at the beginning of 2006, the country reached a relatively high level of stability and the reconstruction of Beirut entered its intensive phase. The capital was then known as the “Paris of the Middle East”. In 2009, Beirut, raised from its ruins, was classified as the "first city to visit" by The New York Times. However, the 2006 Israeli-Lebanese war put an end to the influx of tourists and caused damage estimated at around three billion US dollars, not counting the ensuing economic slowdown. Lebanon also remains a very unequal country, where the richest 1% hold 40% of the wealth.