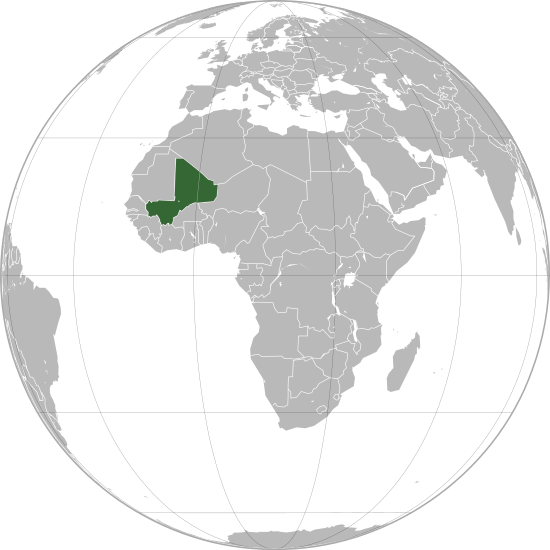 Mali, in long form the Republic of Mali, is a state in West Africa, bordering Mauritania to the west, Algeria to the north-northeast, Niger to the east, Burkina Faso and Côte d'Ivoire to the south-southwest, Guinea to the southwest, and Senegal to the west-southwest. Former French colony of French Sudan, Mali became independent on September 22, 1960, after the break-up of the federation of Mali grouping Senegal and the Sudanese Republic. Its motto is "One People - One Goal - One Faith" and its flag is made up of three vertical stripes of green, yellow and red. The Republic of Mali has retained the borders inherited from colonization, those of French Sudan. Previously, several kingdoms and empires succeeded each other, encompassing a more or less significant part of present-day Mali and neighboring countries. With 20 million residents, the Malian population is made up of different ethnic groups, the main ones being the Bambaras, the Bobos, the Bozos, the Dogons, the Khassonkés, the Malinkés, the Miniankas, the Peuls, the Sénoufos, the Soninkés (or Sarakolés), the Sonrhaïs, the Tuaregs, the Toucouleurs. French is the official language, but the population mainly speaks the national languages, Bambara being the most used and serving, alongside French, as a vehicular language. With an essentially rural economy, Mali, a landlocked country, is one of the least advanced countries in terms of socio-economic development. The country is part of the Economic Community of West African States (ECOWAS) and the African Union. Since 2012, Mali has been the target of jihadist attacks and has faced communal conflicts. Its capital is Bamako, whose urban area has 2.529 million inhabitants in 2019.

The geology of Mali offers a wide variety of rocks: Archean and Paleoproterozoic age layers form the bedrock of much of the west and center of the country; the northern half is covered by sediments from the Taoudeni basin, in the center of the West African craton: these are mainly sediments accumulated between the Neoproterozoic and the lower Cambrian (recognizable by the triad tillites, barite chalk and chaille ) on the one hand, and Phanerozoic sediments on the other. Mali, with its 1,241,238 square kilometres, is the largest state in West Africa after Niger. The relief is not very accentuated and the highest point of the country is Mount Hombori (1,155 m). The very vast alluvial plains are however dominated by a few limestone and sandstone plateaus (Manding and Dogon plateaus). Mali is crossed by two large rivers: the Niger (crossing the country over 4,200 km) and the Senegal.

The country has three climatic zones: the northern two-thirds of the country, entirely desert, belong to the southern Sahara, with annual rainfall of less than 127 mm. This region is crossed by nomads with their herds; the center: the Sahelian region, relatively dry (with relatively insufficient tropical rains), is covered with steppe gradually replaced towards the south by savannah. The Niger valley is cultivated thanks to certain development works: there is rice, cotton, shea (name in the Soninké language),