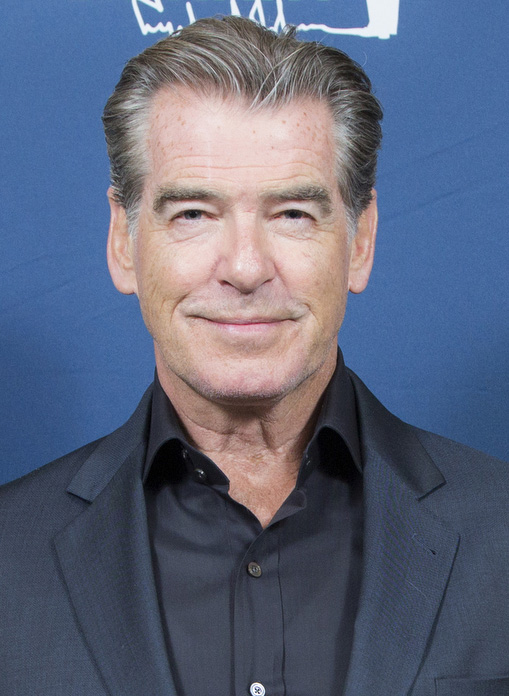 Pierce Brosnan (pronounced: / pɪəɹs ˈbɹɑsnən /) is a naturalized American Irish actor and film producer, born May 16, 1953, in Drogheda. Revealed by the television series The Investigations of Remington Steele, he is notably known for being the fifth actor to play James Bond, whom he plays in four films of the British franchise: GoldenEye (1995), Tomorrow never dies (1997), The World Is Not Enough (1999) and Die Another Day (2002). He is also present in other successful productions, such as Mars Attacks! (1996), Thomas Crown (1999) and The Foreigner (2017).

Pierce Brosnan had a difficult childhood. The only child of Thomas and May Brosnan (née Smith), he grew up in County Meath, near Navan. The local school he attended is a religious institution run by the De La Salle brothers. His father left the family home in 1954. It was not until the age of 31 that Brosnan first met his father. Her mother then moved to London, England. She divorces her father and remarries an English WWII veteran, William Carmichael, who quickly takes on the role of a father for the then 11-year-old Pierce. It's Carmichael who takes Pierce to see his first James Bond, Goldfinger. He goes to Elliot School, a modern public school in Putney, a west London neighborhood. When he goes to high school he is nicknamed 'Irish'. After graduating from school, he, who wanted to be an artist, began training in commercial illustration at the Central Saint Martins College of Art and Design. At sixteen, while playing the fire-eater in the street, he was noticed by a circus agent who hired him. For three years he trained as an actor at London's Drama Center.

Upon graduation, Brosnan got a job in 1975 at the York Theater Royal, making his first stage appearance in Alone in the Night. Within six months playwright Tennessee Williams himself noticed him for the role of McCabe in the UK premiere of The Red Devil Battery Sign. He thus obtains his first important role. His performance caused a sensation in London, he kept the telegram sent then by Williams, saying simply "Thank you my God for you, my dear boy". He continued his career by making brief appearances in films such as Blood on the Thames (1980), The Mirror Shattered (1980) as well as on television in the series The Professionals and Play for Today. He became a television star in the United States for his role in the famous miniseries The Manions of America, co-starring with Kate Mulgrew, David Soul and Linda Purl. He continued his career with the role of Robert Gould Shaw II in 1982 in the documentary Masterpiece Theater recounting the life of Lady Nancy Astor, originally from the state of Virginia, and the first woman to sit in the British parliament. His performance as the Bereft Lover Shaw earned him a Golden Globe Award nomination for Best Supporting Actor in a Miniseries. In 1982, Brosnan rose to prominence in the United States, playing the role of a thief-turned-detective in the popular crime series The Investigations of Remington Steele, broadcast by NBC. He shares the limelight with Stephanie Zimbalist. The same year, in a publication of the Washington Post, one could read that “Pierce Brosnan could manage to play a young James Bond. In 1986, Brosnan is indeed offered the role of James Bond before the end of the series Remington Steele. However, he cannot break the contract that binds him to his television series. In 1987 he played alongside