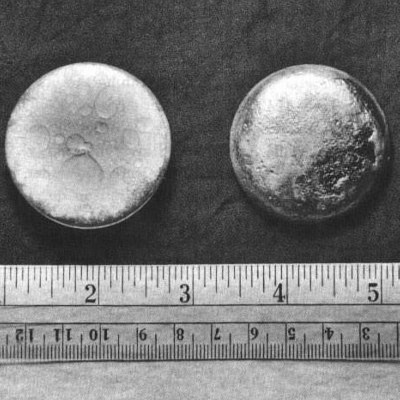 Plutonium is the chemical element with the symbol Pu and atomic number 94. It is a transuranic radioactive metal of the actinide family. It is in the form of a crystallized solid whose fresh surfaces are silvery gray but are covered in a few minutes, in the presence of humidity, with a dull layer of gray color, sometimes tending to olive green, consisting of oxides and hydrides; the resulting increase in volume can reach 70% of a block of pure plutonium, and the substance thus formed tends to disintegrate into a pyrophoric powder. Plutonium was first produced and isolated on December 14, 1940 at the University of California at Berkeley by bombarding uranium 238 with deuterium. Coming after uranium and neptunium in the periodic table, this new chemical element was named in reference to Pluto, which comes after the planets Uranus and Neptune in the Solar System. It is a synthetic element, produced artificially by man, but it is also reported the observation of traces of natural plutonium in uranium ores. It is a radiotoxic heavy metal which tends to accumulate in the bones and, to a lesser extent, in the liver. We commonly observe four oxidation states of plutonium, from +3 to +6 (the +7 state is rare), with distinct colorations. The electronic structure of the pure metal is determined by the 5f band, which has the greatest density of states at the Fermi level; Particularly narrow, the 5f band tends to locate the electrons therein, so that pure plutonium at room temperature is similar to heavy fermion materials, with high heat capacity and electrical resistivity. We know no less than six allotropes of plutonium at atmospheric pressure, and a seventh above 60 MPa. They have well-defined and often unusual properties for a metal. Thus, α plutonium, stable at room temperature, is one of the very rare metals to crystallize in the monoclinic system; its physical and structural properties relate more to minerals than to common metals, while its mechanical properties are reminiscent of those of cast iron. Plutonium δ, stable at higher temperature or with a low molar fraction of gallium, on the other hand crystallizes in a face-centered cubic lattice, with a density nearly 20% lower than that of α plutonium; it is more metallic, with mechanical properties similar to aluminum, but a negative thermal expansion coefficient (it contracts on heating). Plutonium is also one of the few chemical elements whose liquid is denser than solid at the melting point. The existence of multiple allotropes with neighboring internal energies makes the shaping of plutonium particularly delicate, to the point that a plutonium-gallium alloy is used instead, which stabilizes the δ phase at room temperature, which facilitates the machining of the parts. in plutonium. Plutonium 239 and plutonium 241 are thermal neutron fissile isotopes, which means they can contribute to a nuclear chain reaction and can be used in the design of nuclear weapons and nuclear reactors. Plutonium 240 has a very high spontaneous fission rate which makes it necessary to maintain a rate of less than 7% in military grade plutonium. Plutonium 238 has a half-life of 88 years and emits α particles; it is a heat source often used by thermoelectric radioisotope generators to supply certain space probes with electricity. The separation of isotopes from plutonium is difficult and they are usually produced specifically by special reactors