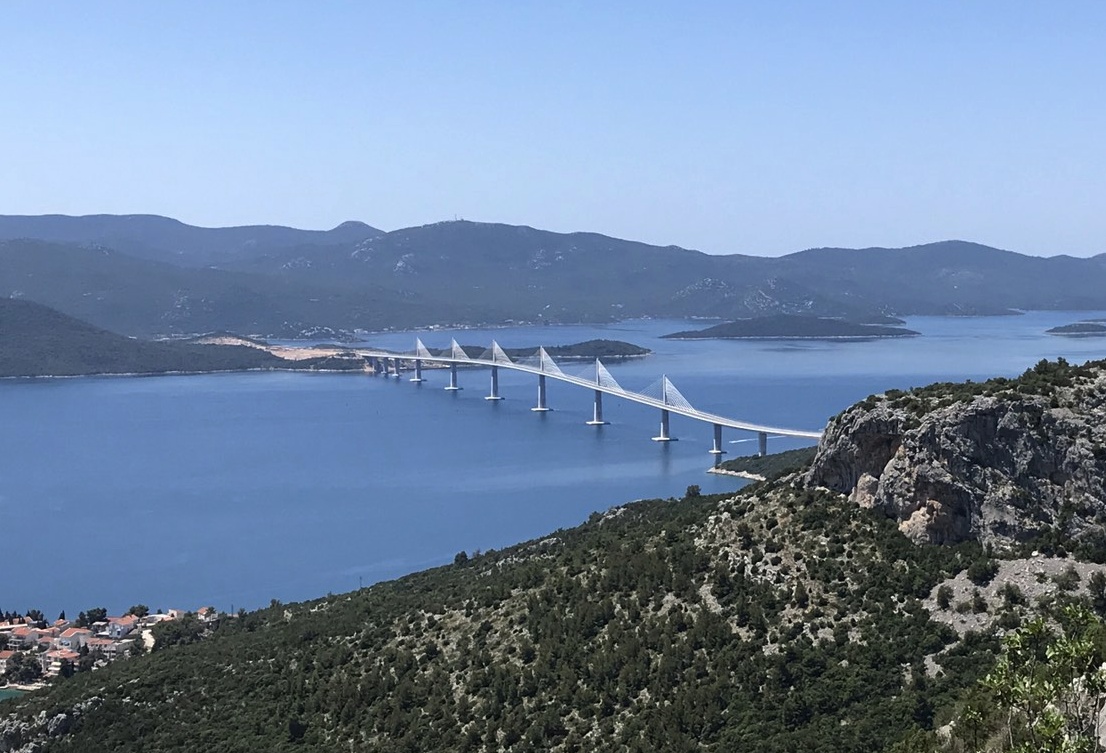 The Pelješac Bridge (Croatian: Pelješki most) is a cable-stayed bridge located in Croatia, inaugurated on July 29, 2021 and put into service on July 26, 2022. It spans the bay of Mali Ston and connects the northern coast of the Pelješac peninsula to the mainland, avoiding passing through Bosnia and Herzegovina. The project, supported by the European Commission, raises tensions between Croatia and Bosnia and Herzegovina.

The bridge is 2.4 kilometers long, 55 meters high and has 4 traffic lanes. It is connected to the existing road network by a new road with tunnels and another bridge over an inlet.

The Croatian region of Dubrovnik is separated from the rest of Croatia by the coastal strip of Neum, the only outlet to the sea of ​​Bosnia and Herzegovina. To get from one part of Croatia to another, one must either transit through Bosnia and Herzegovina via the port town of Neum, or take a ferry between the Croatian towns of Trpanj and Ploče. The bridge project aims to allow passage from the Dubrovnik region to the rest of Croatia without passing through the small portion of Bosnian territory in Neum. The bridge project was first initiated in 2007 by the Croatian authorities before being interrupted in 2012 due to the economic crisis. In 2015, Croatian Prime Minister Zoran Milanovic announced that the project was relaunched. In June 2017, despite the controversy with Bosnia and Herzegovina, the European Commission announced that it would finance the Pelješac bridge to the tune of €357 million.

Construction begins in 2007 and ends in 2021. Following complaints from Bosnia and Herzegovina (on the passage of large ships from Neum), the deck of the bridge was raised. The total price of the operation has been increased to just over 550 million euros, 357 of which are financed by the European Union. On July 29, 2021, Croatian Prime Minister Andrej Plenković attends the inauguration of the bridge. The opening to traffic is on July 26, 2022.

Relations with Bosnia and Herzegovina

The project arouses the opposition of the Bosnian authorities, who fear that the bridge hinders or prevents the passage of large tonnage ships towards the port of Neum, an argument refuted by the Croatian government which ensures that the technical characteristics of the bridge are made in a way to allow the passage of any vessel. The Bosnian government has consistently maintained that the construction of the bridge is not possible until the two countries have resolved the issue bilaterally. Bosnia and Herzegovina informed the European Commission of this in a letter in September 2017. In January 2018, Croatian President Kolinda Grabar-Kitarovic reaffirmed that the bridge is of great importance for Croatia and that it is not directed against the interests of Bosnia and Herzegovina. The contract for the construction of the bridge was signed in April 2018 between the Croatian government and the Chinese consortium China Road and Bridge Corporation. In response, the President of the Council of Ministers of Bosnia and Herzegovina, Denis Zvizdic, announces that he will send a new letter to the European authorities to try to prevent the construction of the bridge.