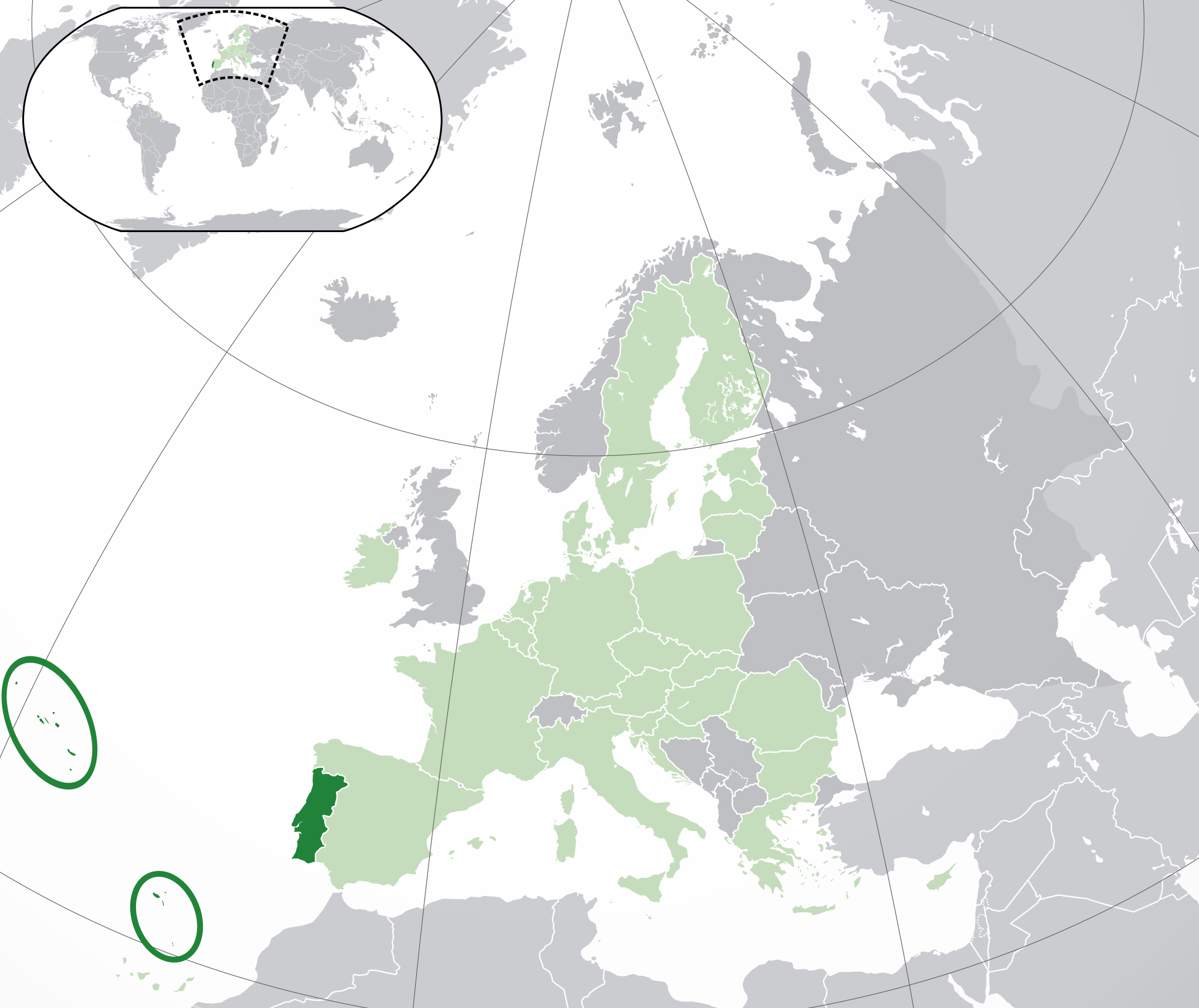 Portugal, in long form the Portuguese Republic, in Portuguese: República Portuguesa, is a country in Southern Europe, member of the European Union, located in the west of the Iberian Peninsula. Bounded to the north and east by Spain and then to the south and west by the Atlantic Ocean, it is the westernmost country in continental Europe. It also includes the archipelagos of the Azores and Madeira, two autonomous regions located in the northern Atlantic Ocean, with a total area of ​​92,090 km2. A founding member of NATO, Portugal is closely linked politically and militarily with all the other Western countries. It is also a member of the OECD, the UN, the Council of Europe and the Schengen area and is one of the founding countries of the euro zone. Portugal also maintains important relations with Spain and France, Germany, the United Kingdom and Italy, which are its five most important trading partners. Founded in the 12th century, the kingdom of Portugal became in the 15th century one of the main powers of Western Europe, playing a major role in the Great Discoveries and building up a vast colonial empire in Africa, Asia, Oceania, and South America. The power of the country declined from the 17th century. The Portuguese monarchy was overthrown in 1910, following a military uprising which forced King Manuel II into exile. The First Portuguese Republic (Portuguese: Primeira República) is the political regime in force in Portugal between the end of the constitutional monarchy marked by the revolution of October 5, 1910 and the military coup of May 28, 1926. Then, for more than forty years, the country was under the authoritarian regime of António de Oliveira Salazar, until the Carnation Revolution of 1974 which put an end to the dictatorship and restored democracy in the country. Portugal's economy then experienced a major boom. At the end of the 20th century, it became a country developed according to European standards, economically prosperous, socially and politically stable. In 2011, the global economic downturn drove Portugal into recession and caused a socio-economic and political crisis. Portugal must also take up the challenge of generational renewal, the country has the lowest fertility rate in Europe and one of the lowest in the world with only 1.23 children per woman. During the dictatorship from 1926 to 1974 nearly one and a half million Portuguese left to work outside the country to escape the poverty of the countryside and the colonial wars. The strong areas of Portuguese emigration are Brazil, the United States, France, Luxembourg (14.1% of the total population of the country), Switzerland, Argentina, Venezuela, Canada, as well as Principality of Andorra. With more than 30 million Luso-descendants (Portuguese descendants) in the world, the Portuguese diaspora is currently one of the main European and global diasporas. Tourism, mainly seaside, is a very important resource, especially in the Algarve and the Lisbon region. Madeira's subtropical climate and unique landscapes make it a popular tourist destination. Portugal is one of the most visited countries in Europe with 12.7 million tourists in 2019. It is also a major wine country, famous in particular for Port wine. Portugal is also the world's leading cork producer. Portugal finally shines thanks to the major events it organizes. Its capital, Lisbon, thus hosted the World Expo on the theme of the oceans in 1998. It also applied, jointly with Spain, to the organization of the 2018 football world cup after having been l host of the European Championship in 2004.