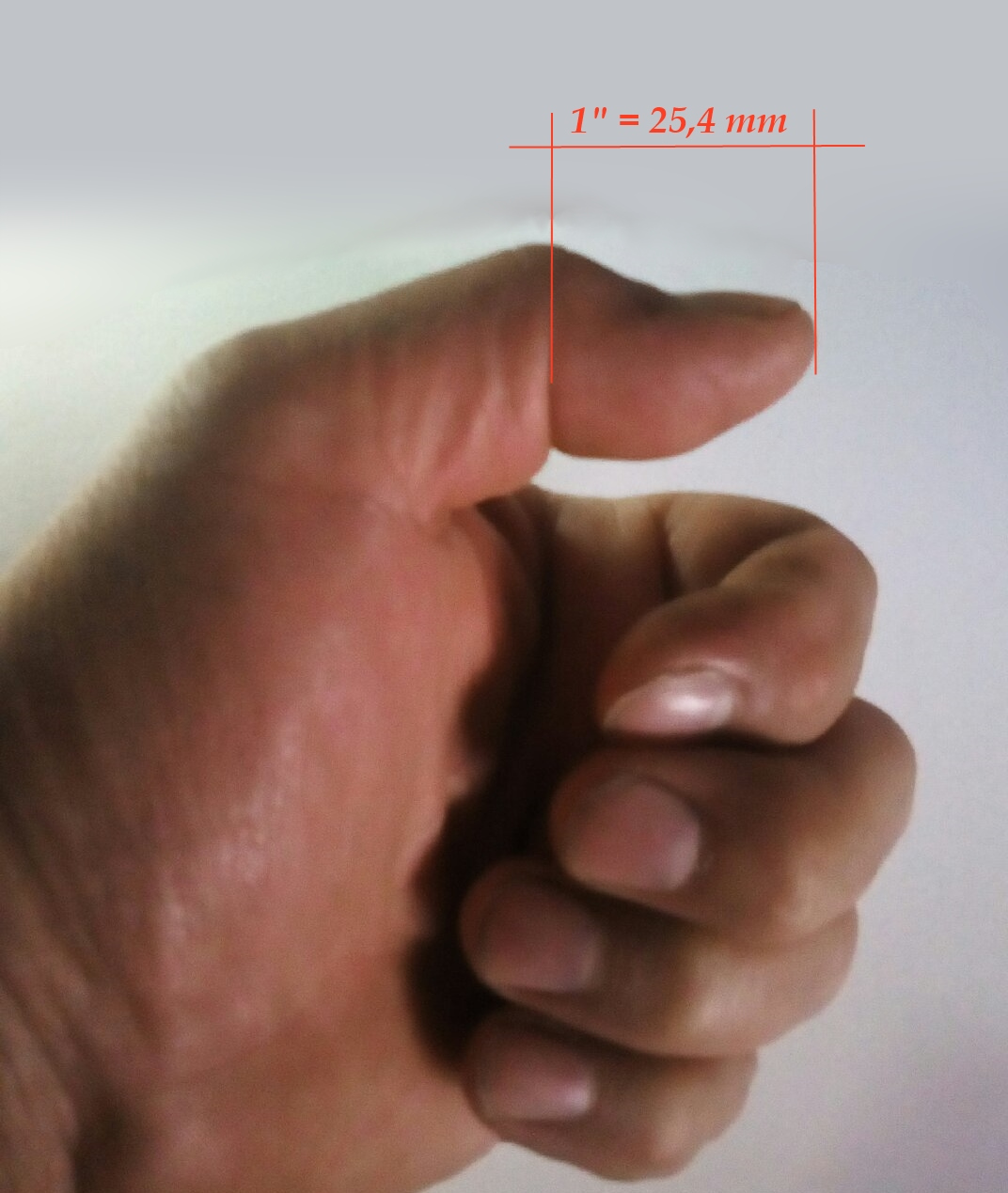 The inch (symbol: ″ (double prime) or po in French-speaking Canada) is a unit of length dating from the Middle Ages. Its dimensional value has varied according to eras, regions and countries. Since 1959, following an Anglophone compromise, the English inch — also called the “international technical inch” — has been worth 2.54 centimeters exactly (one-twelfth of a foot, or 1⁄36 of a yard or verge in Canada). For historical reasons, other definitions of the thumb are still in use in some areas.

The length of the standards has varied according to the times and the countries, even according to the regions of the same country. In Antiquity, among the Egyptians, Greeks and Romans for example, the thumb was either misunderstood or ignored in favor of the finger, that is to say the foot divided into sixteen equal parts (four fingers make a hand, four hands are one foot; the hand corresponds to the transverse distance from the outer side of the little finger to the outer side of the index finger). From the beginning of the Middle Ages, we began to divide the foot by twelve (cf. Gromatici veteres). The resulting unit of measurement was called an "inch" because one can approximate an "inch" using the width of one's thumb.

In Quebec and New Brunswick, the King's inch was worth exactly 750⁄27 706 meters (about 27.069 95 mm) because the law of 19 Frimaire of the year VIII (December 10, 1799) provided that the meter was equal to 3 feet 11 lines 296 thousandths, or 443.296 lines of Roi. Nowadays, this measure is almost no longer used in France. It is found, for example, as a conventional unit for sawing wood. The Quebec inch, which is no longer in effect, was assumed to be identical, but its Canadian legal definition (Weights and Measures Act, L.R. 1985) gives 1 in 27.070 05 mm exactly. The only inch still in informal use in Quebec and New Brunswick is the English inch of 25.4 mm. It is used in many situations, although it was legally replaced by the centimeter on August 1, 1974.

In the British Isles, a system of units developed [When?]. Due to the importance of British and then American political or economic penetration, this system was used or known in more than 140 English-speaking countries [ref. necessary]. In 1824 this system was codified under the name of "imperial system of units". Until 1959, the American, Canadian and English thumbs differed very slightly. In 1959, with the agreement of the United States and Commonwealth nations, the international technical inch was defined as being “exactly 25.4 mm”. This inch value is still in effect. Since three feet is a yard, a yard is 36 inches.

Sweden has devised a different way of entering the metric system. In 1855–1863, the inch, in function, was converted into decimal inch which was worth 1⁄10 of foot instead of 1⁄12. This decimal inch was therefore worth approximately 3 cm. Proponents of this decimal system said it would simplify calculations. However, having two thumbs of different sizes was far too complicated to maintain. In the years 1878–1889 the decision was therefore made to use the metric system.

The fontainier inch (or "fontainier's inch") is a unit of flow from the Old Regime.

The cubic inch (“cubic inch” in English, or “ci”) is used as