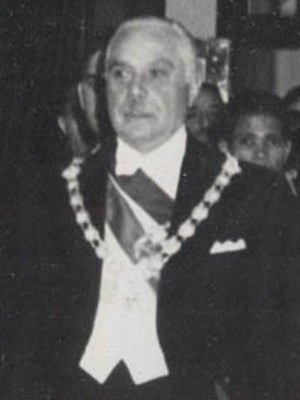 Rafael Trujillo Molina, born October 24, 1891 in San Cristóbal and died May 30, 1961 in Ciudad Trujillo, was a Dominican soldier and statesman who was twice the President of the Dominican Republic (1930-1938 and 1942-1952 ). In fact, from 1930 to his death in 1961, he exercised absolute power over the country. He joined the National Guard, trained by the United States Marine Corps, to maintain order after the occupation. He quickly rose in rank and overthrew President Horacio Vásquez in 1930. After having imposed the Dominican Party as the only party in the country, his anti-communism and conservatism enabled him to have the support of the United States, the Church, the army and the wealthy classes. Exalting Dominican nationalism and xenophobia towards Haitians, his regime massacred several thousand Haitian immigrants in October 1937. He established a personality cult around his person, officially calling himself "His Excellency Generalissimo Doctor Rafael Leonidas Trujillo Molina, Honorable President of the Republic, Benefactor of the Fatherland and Reconstructor of Financial Independence", had thousands of of statues bearing his likeness, renamed the country's capital Ciudad Trujillo and organized a major national holiday to commemorate the 25th anniversary of his reign in 1955. He takes possession of more than a third of the country's land and 80% of the industries. At his death, his fortune was estimated at $800 million, making him one of the wealthiest men of his time. A loyal supporter of United States policy in the Caribbean, he was however implicated in the attempted assassination of Venezuelan President Rómulo Betancourt. His ties with the United States then became strained and, in 1960, the Organization of American States unanimously approved sanctions and various diplomatic approaches against his regime. He was assassinated by Dominican soldiers on May 30, 1961 during a car trip.

His father, José Trujillo Valdez, is a small merchant of Canarian descent; his mother, Altagracia Julia Molina Chevalier, who was later nicknamed Mamá Julia, was the daughter of a Dominican peasant. The latter's maternal grandfather is a Haitian officer who arrived in the country during the Haitian occupation of the Dominican Republic. This Haitian ancestry of Trujillo is later concealed as carefully as possible by the dictator, particularly from the massacre of Haitians in 1937. Rafael Leónidas is the third of eleven children; some of his brothers and sisters will play an important role during his dictatorship. His childhood passes without notable incident, but his education is irregular and rather limited. In 1897 he was enrolled in school in San Cristóbal and attended school there for a few years. In 1907, he obtained a job as a telegraph operator, which he held for three years. However, he teams up with his younger brother José Arismendi to steal mail and forge checks. They are discovered and, found guilty, imprisoned for a few months. On August 13, 1913, Trujillo married Aminta Ledesma, a girl from a good family in her hometown. They have two daughters: Genoveva who was born in 1914 and died shortly after birth, and Flor de Oro (1915-1978) who was married to Porfirio Rubirosa from 1932 to 1938. In 1916, he resumed his criminal activities by joining a band called La 42, particularly feared for its violence. Thereafter he moves away from his companions to become a guard in the sugar cane fields.

On December 18, 1918, Trujillo joined the Guarda Nacional which was formed and