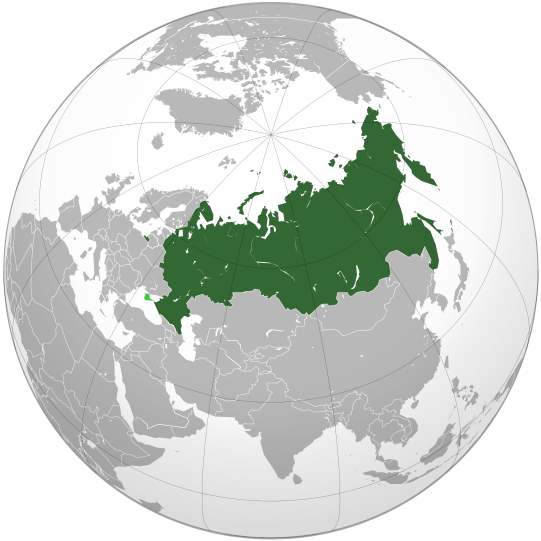 Russia (in Russian: Россия, Rossiïa), in long form Russian Federation (in Russian: Российская Федерация, Rossiïskaïa Federatsiïa), is a transcontinental federal state, the largest state on the planet, straddling North Asia (80% of its area) and Europe (20%). From west to east, its territory extends from the Baltic Sea (exclave of Kaliningrad) to the Bering Strait (autonomous district of Chukotka) over more than 6,600 kilometers, with an area of ​​17,125,191 km2, or 11.5 % of land area. Bordering the Arctic Ocean to the north, Russia is characterized by a continental climate with particularly cold and hostile winters over a large part of the territory, particularly in Siberia, east of the Urals. The Russian population is estimated at nearly 146 million in 2021, making it the ninth most populous country on the planet. 78% of its inhabitants live in Europe. After the fall of the Rus' of Kiev in the 13th century, the Grand Principality of Moscow unified several neighboring territories and became the Tsarate of Russia in the 16th century, founded by Ivan the Terrible. The country expanded rapidly by conquering North Asia in the 17th century. In 1721, Tsar Peter I the Great established the Russian Empire which became the third largest empire in history as well as a major power in Europe. The Russian Revolution following World War I led to the fall of the imperial dynasty in March 1917, then the seizure of power by the Bolsheviks led by Vladimir Lenin and the establishment of the Union of Soviet Socialist Republics (USSR) in 1922 , of which the Russian Soviet Federative Socialist Republic is the main constituent. After the Second World War, the USSR became one of the two superpowers of the Cold War, spearheading communist ideology and “real socialism” against the capitalist world led by the United States. The Soviet Union developed nuclear weapons as early as 1949, stunned the world with its advance in space, and got involved in numerous conflicts in order to maintain and extend its influence, notably engaging in a war in Afghanistan in 1979, one of the causes of its collapse in the years 1990-1991. At the end of 1991, the USSR broke up into fifteen independent states, including Russia, which took over the place of the USSR in international institutions, in particular the permanent seat on the United Nations Security Council. It also assumes the financial liabilities of the USSR and supports Soviet nuclear weapons. It is also at the origin of the Commonwealth of Independent States (CIS) which brings together ten of the former Soviet republics. Russia then adopted a market economy and a pluralist parliamentary system. Since the resignation of the first president, Boris Yeltsin, in 1999, political life in Russia has been dominated by Vladimir Putin, often described as an authoritarian leader and accused of human rights violations, as well as corruption and interference. Today's Russia is a federation made up of 85 entities, the “subjects of the Federation”, with varying political and economic autonomy. The territorial division, which takes into account among other things the presence of minorities, is based on that of Soviet Russia. Aspiring to fit into globalization, Russia is part of the BRICS (Brazil, Russia, India, China and South Africa). It also sees itself as a bridge between Europe and Asia. In 2019, Russia is the world's eleventh largest economy in terms of nominal GDP and sixth in purchasing power parity.

The territory of Russia consists mainly of vast plains where predominate the steppes in the south, the forest in the north and the tund