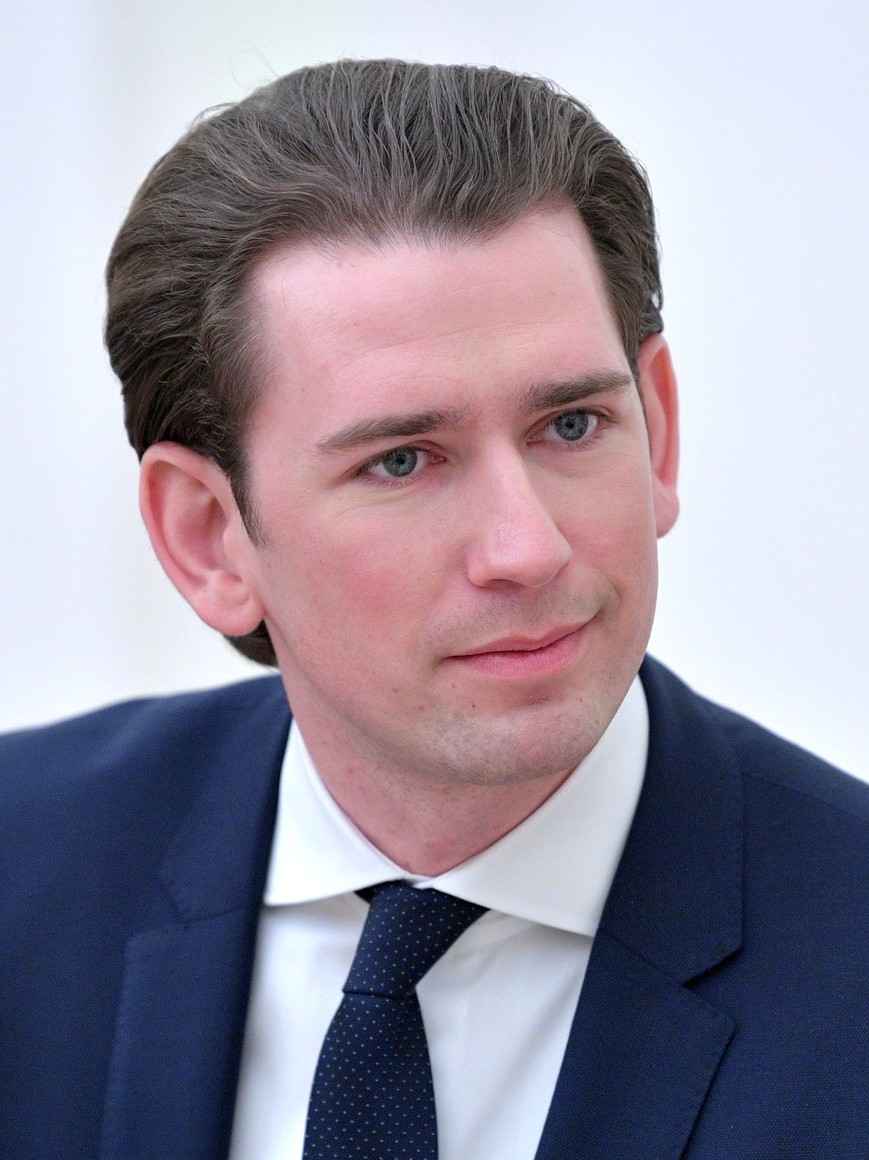 Sebastian Kurz (/ zeˈbastˌi̯aːn ˈkʊrt͡s /) is an Austrian statesman, born August 27, 1986 in Vienna. He has been Federal President of the Austrian People's Party (ÖVP) since 2017 and Federal Chancellor from 2017 to 2019 and from 2020 to 2021. He was a member of the Vienna Landtag between 2010 and 2011, then Federal Secretary of State for Integration until 2013. He was then appointed Federal Minister of Foreign Affairs, becoming at the age of 27 the youngest of the Austrian government and heads of European Union diplomacy. In 2017, he was elected president of the Popular Party and broke the ruling grand coalition, leading to early elections which he won. He then formed a coalition with the Freedom Party (FPÖ) and was appointed Federal Chancellor. He separated from the FPÖ in 2019 due to a corruption scandal, calling new elections before being overthrown by a motion of censure, a first since 1945. At the end of this election, he established an alliance with Les Greens (Grünen). He resigns in 2021 over accusations of embezzlement of public funds.

Sebastian Kurz is the son of an engineer and a high school teacher. He grew up in the 12th district of Vienna, in Meidling. He continued his studies at the modern high school (in German: Realgymnasium) GRg Erlgasse and obtained his baccalaureate in 2004 (maturity in Austria). In 2011, he decided to suspend his law studies at the University of Vienna to devote himself to politics.

In 2009, he was elected president of the JVP, the youth movement of the Austrian People's Party (ÖVP). During the campaign for the local elections of 2010, he was noticed for his slogan "Black, it rocks", in reference to the official color of his party: boarded a "sexymobile" with young girls in clothes tight-fitting who distributed condoms to passers-by, he wanted to "speak the language of youth", even if his final score remains low. He was a member of the Vienna Landtag between 2010 and 2011. On April 21, 2011, he was appointed State Secretary for Integration to the new Federal Minister of the Interior Johanna Mikl-Leitner, at only 24 years old. In this post, he passed a law banning the burqa and another which largely cut social subsidies to integration candidates, in order to get them to find a job. At the end of the legislative elections of 2013, he was elected deputy to the National Council.

When the grand coalition, in power since 2007, was renewed on December 16, 2013, he became Federal Minister for Integration, European and International Affairs. At 27, he thus became not only the youngest in the Austrian federal government, but also the youngest foreign minister in the European Union. In the context of the migration crisis, he calls for the closure of Austrian borders and advocates the end of negotiations for Turkey's accession to the European Union. He was then the only Minister of Foreign Affairs of the European Union to demand the end of these negotiations. By securing the closure of the Balkan route, it is gaining popularity among the Austrian population.

Federal President of the ÖVP

He indicated on May 12, 2017 that if he were elected to the federal presidency of the ÖVP, he would put an end to the grand coalition, causing new early elections. Appointed at the head of the People's Party on May 14, he confirmed his intentions and presented a request to that effect the next day to the Social Democratic Federal Chancellor Christian Kern and to Federal President Alexander Van der Bellen. On July 1, 2017, he was elected head of the party at a convention. He is not