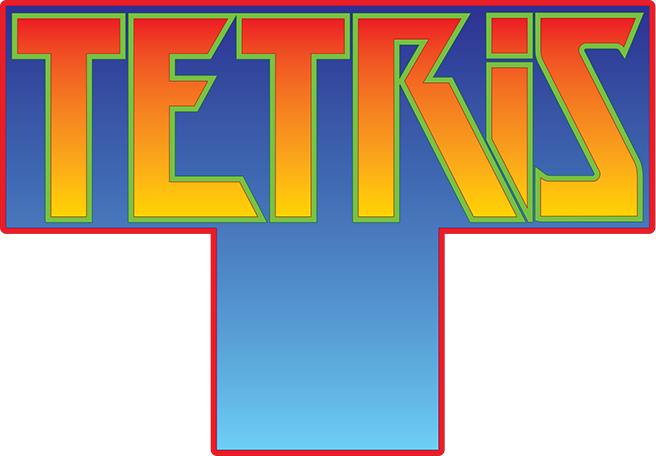 Tetris is a puzzle video game designed by Aleksei Pajitnov from June 1984 on Elektronika 60. When creating the concept, Pajitnov was helped by Dmitri Pavlovsky and Vadim Guerassimov for development. The game was published by several companies over time, following a war for the appropriation of rights in the late 1980s. The precise course of development and first commercialization is still debated in the 2010s. significant exploitation by Nintendo, the rights belong since 1996 to The Tetris Company. Tetris challenges the player to make complete lines by moving pieces of different shapes, the tetrominos, which scroll from the top to the bottom of the screen. The completed rows disappear while earning points and the player can fill in the freed squares again. The game has no end: the player loses the game when a tetromino gets stuck at the top. He must therefore resist the continuous fall of the tetrominoes as long as possible, in order to achieve the best score. In the case of a multiplayer game, the goal is to resist longer than your opponent, knowing that it is possible to send yourself penalties by performing line combinations. According to journalist Bill Kunkel, "Tetris perfectly meets the definition of the best in gaming: a minute to learn it, a lifetime to master it". Built on simple rules and requiring intelligence and skill, it is considered one of the great classics in the history of video games alongside Pong, Space Invaders and Pac-Man. The game is suitable for most game media, both on computers and on game consoles and mobile phones. Some versions bring variants such as a 3D display, a reserve system or even multiplayer games. As of 2010, Tetris has sold over 170 million copies worldwide since 1984. Available on over 65 platforms, its most memorable version is on Game Boy, with 30,260,000 units sold. Meanwhile, in April 2014, it was announced that the franchise had reached over 425 million downloads (counting non-paying downloads) on mobile phones since 2005. Tetris is anchored in popular culture and its notoriety goes beyond that of the video game sphere, with imitations of the game on buildings, numerous reworkings of the original theme or even tetrimino costumes. The game is also the subject of various research works: several researchers have analyzed its theoretical complexity, while others have shown the effects on the brain after a game session, in particular the Tetris effect.

Tetris is mainly made up of a playing field where differently shaped pieces, called "tetriminos", descend from the top of the screen. During this descent the player can only move the pieces laterally and make them rotate on themselves until they touch the bottom of the playing field or an already placed piece. The player can neither slow down the fall of the pieces nor prevent it, but in some versions he can speed it up. The goal for the player is to make as many lines as possible, in order to keep space to place future pieces. Once a line is completed, it disappears, and the blocks placed above drop one row. If the player fails to clear the lines fast enough, then the screen may fill to the top. When a tetrimino protrudes from the field of play, and prevents the arrival of additional tetriminos, the game ends. The player gets a score, which essentially depends on the number of lines made during the game. the