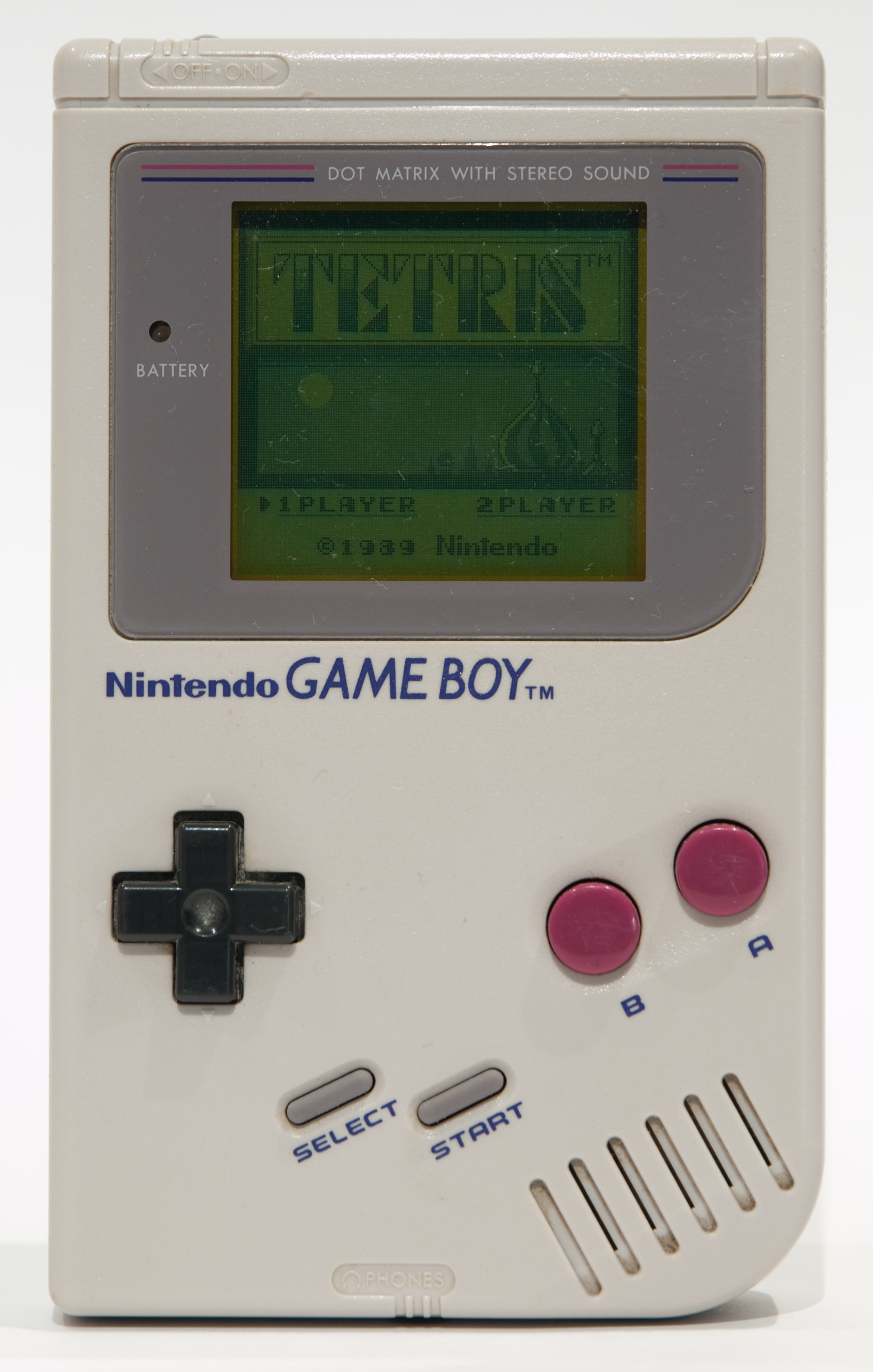 Tetris is a puzzle video game developed and published by Nintendo for the Game Boy, marketed in North America and Japan in 1989 then in Europe in September 1990. The game is an adaptation of the concept of Alekseï Pajitnov imagined from 1984, whose Nintendo secured the exclusive rights via an agreement with the government of the USSR a few months before the game's release, in March 1989. The goal for the player is to arrange the pieces (called tetromino) which fall from the top of the screen one after the other, in order to make lines. The player can horizontally move and rotate the pieces as long as they haven't touched the bottom of the screen or another already positioned piece. If the coins land at the top of the screen, the player has lost and therefore gets a score, reflecting their performance based on the number of lines completed. This is the first game compatible with the Link Cable, an accessory that allows two Game Boy to connect to play against each other. This version is the most popular version of Tetris on console, with over 30 million sold worldwide. The game is included with the Game Boy when it was released in 1989 and is presented as a marketing asset, since the game is intended to be simple and adapted to this new gaming platform. The game is reissued on the Nintendo 3DS Virtual Console in 2011, before being withdrawn from sale in January 2015.

The Game Boy version of Tetris is identical to the console version on the Nintendo Entertainment System. Tetrominoes — shapes made up of four squares each — fall randomly into the playing area. The objective is to position these shapes, by moving them horizontally and rotating them by 90°, in order to create a horizontal line of blocks without holes . When one or more lines of this type are created, they disappear, and the blocks above (if any) descend by the number of lines disappeared. In most versions of Tetris, blocks don't fall into holes when lines disappear (see image titled "Gravity of Tetris"). The further the game progresses, the faster the tetriminos fall. The game ends when at least one block of a tetrimino exceeds (top) the playing space when placed. The player can normally see the tetrimino in a window on the side of the playing area. This option can be removed during the game. Points are given according to the level and the number of lines completed. The level increases each time the player completes 10 lines, resulting in an increase in tetromino drop speed. The player can adjust the difficulty before starting a game by selecting a starting level and/or choosing to pre-fill the game area with a number of lines made up of randomly placed blocks. An alternative mode is available, by simultaneously pressing the down arrow and start on the start screen, level 0 corresponds to level 10 of the standard mode (same for all other levels). This mode is called "heart" mode because of the presence of a small heart next to the level number on the game screen. This version of Tetris includes a two-player mode, the goal being to outlast your opponent. Each player plays on his Game Boy, the two consoles being connected via the Link cable. During play, when a player completes a double, triple, or Tetris, one or more lines of incomplete blocks are added to the bottom of the opponent's deck, bringing them closer to the top of the deck.

In 1984, Aleksei Pajitnov, a researcher at the Russian Academy of Sciences, together with Dmitry Pavlovsky and Vadim Gerasimov developed Tetris, wishing to obtain a puzzle similar to the pentomino game. The game was then a rapid success on computers. In 198