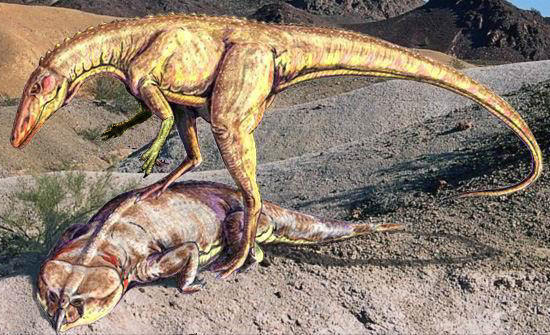 The Triassic (formerly Triassic) is a geological system, a subdivision of the Mesozoic era between −252.2 ± 0.5 and −201.3 ± 0.2 million years. The Triassic is preceded by the Permian and followed by the Jurassic. Defined and named by the German geologist Friedrich August von Alberti in 1834, the Triassic owes its name to the three (litho-)stratigraphic units of which it is composed in Central Europe: Buntsandstein (variegated sandstone), Muschelkalk (shelly limestone) and Keuper. The regularity of these deposits in central Europe has enabled sedimentologists to highlight the principles of stratigraphy. The name "the Triassic" has sometimes been used in certain more or less ancient French texts.

The beginning of the Triassic is now officially defined by the International Commission on Stratigraphy by the appearance of the conodont Hindeodus parvus. The Global Boundary Stratotype Section and Point (GSSP) corresponding to the lower limit of the Triassic is located in the Meishan section (31° 04′ 47″ N, 119° 42′ 21″ E), in the county of Changxing, China. The Triassic is subdivided into three eras (Lower, Middle and Upper Triassic) and into seven stratigraphic levels: Upper Triassic Rhaetian (~208.5 – 201.3 ± 0.2 Ma) Norian (~228 – ~208.5 Ma) Carnian (~235 – ~228 Ma) Middle Triassic Ladinian (~242 – ~235 Ma) Anisian (247.2 – ~242 Ma) Lower Triassic Olenekian (251.2 – 247.2 Ma) Induan or Indusian (252.2 ± 0.5 – 251.2 Ma) The Germanic Triassic is a lithostratigraphic unit present in a large part of Western and Central Europe (north of the Alps) and the Sea of North. The Germanic Triassic is divided into Buntsandstein (variegated sandstone), Muschelkalk (shelly limestone) and Keuper. The Scythian is a subdivision of the Triassic, defined in 1895 by geologists Edmund Moïssissovics, Wilhelm Heinrich Waagen and Carl Diener in the marine domain (Alpine Triassic). This subdivision corresponds to the Lower Triassic, and designates either a floor or a series according to the authors. We also find the equivalent term Werfenian.

Since the Upper Carboniferous and the closure on its western part of a vast east-west ocean called Paleotethys, most of the land surface has been grouped into a single supercontinent called Pangea. Thus in the Lower Triassic, the layout of the continents resembles a sort of "Pac-Man" with its mouth open towards the east. The upper "jaw" is called Laurasia, the lower Gondwana, it is surrounded by a vast ocean called Panthalassa (all sea). The Paleotethys (the ocean which therefore forms the space in the mouth) continues to close in the east throughout the Triassic. Its closure by subduction towards the north creates a succession of small oceans (called back-arc basins) whose sediments are observed today mainly in Eastern Europe (so-called Hallstatt, Meliata, Maliak and Küre basins) . In the Permian, some lands separated from the northern Gondwana margin and began to drift north. These are parts of Turkey, Iran, Afghanistan, Tibet and South China. This string of large islands is called “Cimmerian continents”; they will collide with Laurasia in the Upper Triassic generating the Cimmerian orogeny. The Upper Triassic also saw the development of an important magmatic province which today covers Morocco and New England in the United States. This volcanism is a precursor to the opening of the central Atlantic that will follow. If therefore the Triassic is remarkable for its tectonic calm in Western Europe and particularly in France, its history east of the Austro-Swiss border is rather turbulent. It is also in the mountains between Tyrol and