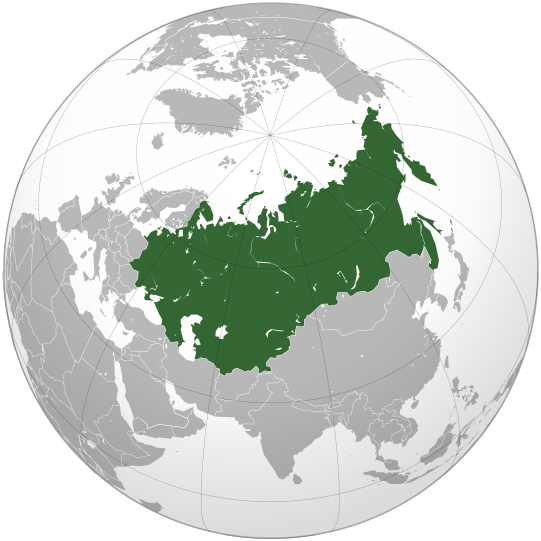 The Union of Soviet Socialist Republics, by abbreviation USSR or abbreviated Soviet Union (in Russian: Союз Советских Социалистических Республик, СССР; transcription: Soyuz Sovietskikh Sotsialistitcheskikh Riespoublik) Transcontinental federal state under a communist regime. This federation existed from its proclamation on December 30, 1922 until its dissolution on December 25, 1991. The Russian Federation is the successor state of the Soviet Union. Being the largest state in the world, the USSR occupied one-sixth of the landmass and extended over eleven time zones, from the Baltic Sea and the Black Sea to the Pacific Ocean, i.e. the entire northeastern part of the USSR. 'Eurasia. It was most of the territory of the former Russian Empire, minus independent Poland and Finland since the Russian Civil War of 1918–1921, and had been augmented by Stalinist-era territorial gains in Eastern Europe and Asia of the East between 1939 and 1945. The territory of the USSR therefore varied over time, especially during and after the Second World War. The Union was made up of eleven, then fifteen union republics which became independent upon its dissolution (while remaining, for the most part, linked within the CIS), as well as a number of republics and autonomous regions. The formation of the USSR was one of the consequences of the Russian revolution of 1917. The February revolution put an end to the reign of the tsars of which Nicolas II was the last representative, and established the Russian Republic which was overthrown on November 7, 1917 by the Bolsheviks during the October Revolution. One of the driving forces behind the creation of the USSR was Vladimir Ilyich Lenin's desire to apply his federalist doctrine by transforming unitary Russia into a union of republics formed according to the principle of ethnic territories enjoying a certain degree of local cultural autonomy. His conception initially opposed that of the Soviet nationalism of Joseph Stalin, who wanted to create a single Russian Soviet Federative Socialist Republic. However, Stalin later reconsidered his positions and, in the years 1925 – 1939, proceeded himself to the creation of several federated republics (in the Caucasus, in Karelia and in Central Asia). The USSR was governed by the Communist Party of the Soviet Union (CPSU) and especially by its executive office: the Politburo. All apparatuses (legislative, executive or judicial), as well as the press and civil society as a whole, were directly subject to the authority of this single party and its political police (successively Cheka, GPU, NKVD, MGB, KGB …), rendering artificial the constitutional autonomy of the federated republics and other autonomous entities, as well as that of the soviets and their hierarchy, including the supreme soviet and its two components, the Union soviet (one deputy for 300,000 inhabitants) and that of the autonomous entities (25 deputies for each federated Soviet, 11 for each autonomous republic, five for each autonomous oblast and one for each okrug or autonomous raïon). These practices, analyzed from 1970 by Andrei Amalrik as a political, social and economic impasse, generating a loss of hope and legitimacy, prompted the Soviet government presided over from 1985 by Mikhail Gorbachev, to reform the system through a policy of glasnost ("transparency") and perestroika ("restructuring"), but it was too late: the loosening of the grip of the single party and the political police did not lead to a new start, but to transformation, in the in the course of 1991, of the Soviet Union into a "Community