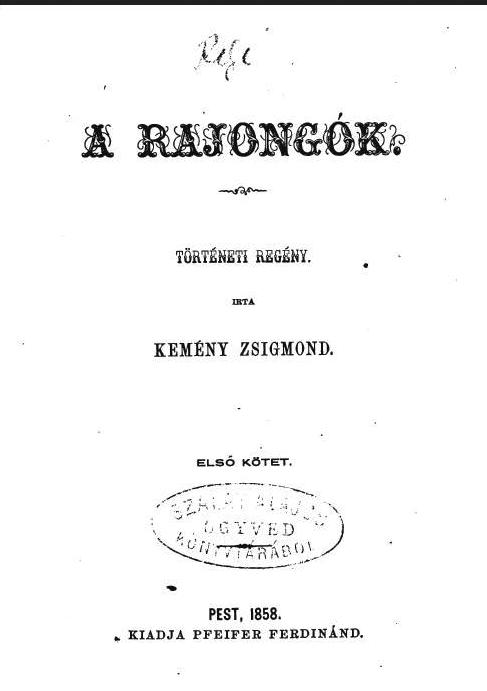 The historical novel of the fans, published by Zsigmond Kemény in 1858–1859, which recalls the age of the Transylvanian prince György I. Rákóczi, including the persecution of the Sabbaths. The work, “the most diverse, the most complex, and yet the most unified” of the author’s novels, gives a faithful picture of the writer’s “evolution of his view of history, his moral conception, the realistic need for his method of representation, and his compositional art.” Szalár is the most significant piece. The work of János Siralmas and the autobiography of Prince János Kemény contains many romantic elements (the unhappy love and tragic death of Elemér Kassai, the intrigues of his uncle against Simon and István Laczkó, the madness and death of the latter), but basically belongs to the realist trend. The novel, which also uses the stylistic tools of drama, entered the literary canon relatively early, but did not become popular in the eyes of either contemporaries or posterity. Origin and sources Fans emerged in parallel with the novel Widow and Daughter, set in the same era. After completing the first two volumes of this in early 1855, Sigismund Kemény wrote a narrative entitled Deborah, which can be considered as the first elaboration of the subject of the Sabbaths; it was published in the April-June 1855 issue of the Pesti Hírlap. He then completed The Widow and Daughter (1857) and wrote The Fans in 1857–1858. Meanwhile, he edited the Pest Diary from June 1855 and December 1857. In addition to the general pessimistic mood of the post-1848-49 revolution and the war of independence, several personal plagues wounded the writer's soul during the period of the two novels. At the end of 1855, her love for Mary Lónyai was rejected by the girl and her family, which meant giving up the desire for a happy family life for the forty-three-year-old man. His mother died at the end of the same year; his workplace, the Pest Diary, was struggling financially. He tried to stifle all of this through overwork and revelry, until he got a nervous breakdown due to his irregular lifestyle. The dashing sense of life also left a mark on his novels. As the main object of Zsigmond Kemény's art is the two centuries of Transylvanian history, in the depiction of which he stands out from his contemporaries, it is not surprising that the plot of this novel takes place in 17th century Transylvania during the reign of György I. Rákóczi. His hard historical interest is partly the result of family tradition and partly of the spirit of the age, but this was reinforced by his former teacher, id. Also Károly Szász. According to his hard conception, "a historical novel must be not only artistically beautiful and true, but - up to certain limits to be determined later - historically true and true." It is no coincidence, then, that the primary source of both novels is the Lamentable Chronicle of János Szalárdi (1662), which the writer himself arranged for the press in 1853. In the case of the fans, he also relied on the autobiography of his family member, Prince János Kemény, which appeared in print in 1856. It is not excluded that the author also had knowledge of the oral traditions of the Gyula family, as in the early 1840s Count György Wass often visited the house of Franciska Gyulai. He was also familiar with the study of Saturday songs at the Hungarian Academy of Sciences in 1850.

The fans take place in the second half of the Thirty Years' War, during the reign of the Transylvanian prince György I. Rákóczi. The first chapter of the novel outlines the defining world political events of the age: in the Battle of Fehérhegy II. Ferdinand was defeated by the Protestants