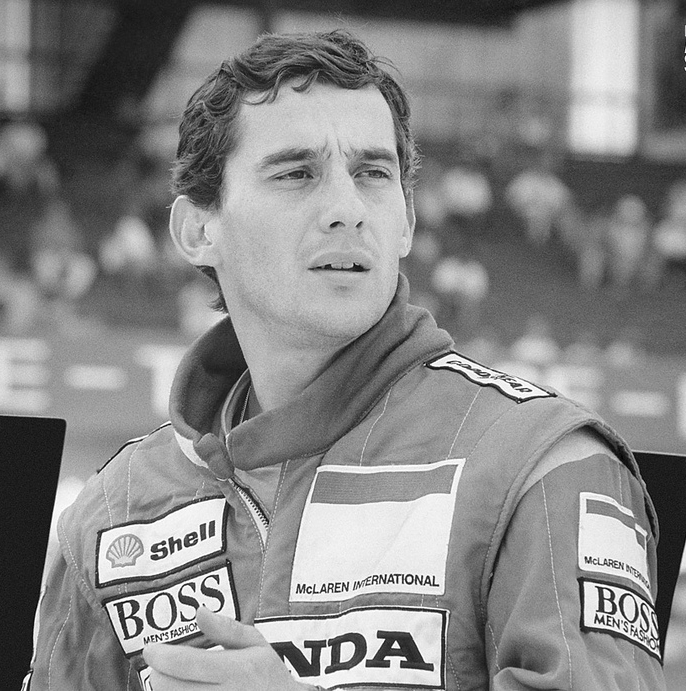 Ayrton Senna da Silva (Brazilian Portuguese pronunciation: [aˈiʁtõ ˈsẽnɐ dɐ ˈsiwvɐ], São Paulo, March 21, 1960 - Imola, May 1, 1994) Brazilian car racer who has won the Formula three times -1 World Championship in the colors of the McLaren team in 1988, 1990 and 1991. His nephew, Bruno Senna, raced in GP2 until 2008 and then competed in Formula One from 2010 to 2012. He began his racing career with a go-kart and then won the British Formula 3 Championship in 1983. The following year, Toleman made his Formula One debut, but was contracted to the Lotus team in 1985, where he won six races in three years. In 1988, one of the best riders of the era, Alain Prost, became a teammate at McLaren, and Senna won the World Championship after a long and fierce struggle, a result he repeated in 1990 and 1991. In the later seasons of McLarenes, Senna won races and, although he was a contender for the individual World Championships in 1993, he ended up second behind Prost, despite the fact that the Williams team already dominated the sport at the time. He also became a British stable rider for the 1994 season, but suffered a fatal accident in the third race of the season at the San Marino Grand Prix. . He was known for his outstanding performance in time trial training, winning 65 pole positions in 162 races. Only Michael Schumacher was able to break his training record twelve years later at the 2006 San Marino Grand Prix, and Lewis Hamilton won his 69th pole in the 2017 season, surpassing both of them. Senna has won six victories at Monte Carlo, but to date, five consecutive race victories on this track between 1989 and 1993 have also been a record. In 2000, he was ceremoniously inducted into the International Motorsports Hall of Fame. The general view is that he was one of the greatest Formula One riders of all time, with millions of role models. With his determination, he stood out from the field in many races. His rivalry with Alain Prost is one of the sport’s most famous and stormy duel between racer and racer. In 1989 and a year later, they clashed at the Japanese Grand Prix, thus deciding the fate of the world title.

Senna was born in maternity care in São Paulo (Maternidade de São Paulo) as the middle child of a wealthy Brazilian landowner family. His father is Milton da Silva, his mother is Neide Senna da Silva, his sister is Viviane and his brother is Leonardo. Senna was left-handed. He spent the first four years of his life in a part of São Paulo called Santana, in a house owned by his maternal grandfather, João Senna. He was also an athletic figure as a young child, tried his hand at gymnastics and other sports, and became interested in motorsports early on. His parents gave him the nickname “Beco”. At the age of seven, he learned to drive a Jeep around the family farm, gaining experience and an advantage in shifting without a clutch. Encouraged by his father, he first started go-karting at the age of four and then started go-karting for the first time at the age of 13, which he could start from a pole position. The first number he wore on his go-kart was 1. There were not many opponents in his homeland between 1977 and 1981. He graduated in 1977 with a high degree in physics, chemistry, mathematics and English. Overall, the average of its tickets reached 68%. He later enrolled in a business college, but graduated three months later.