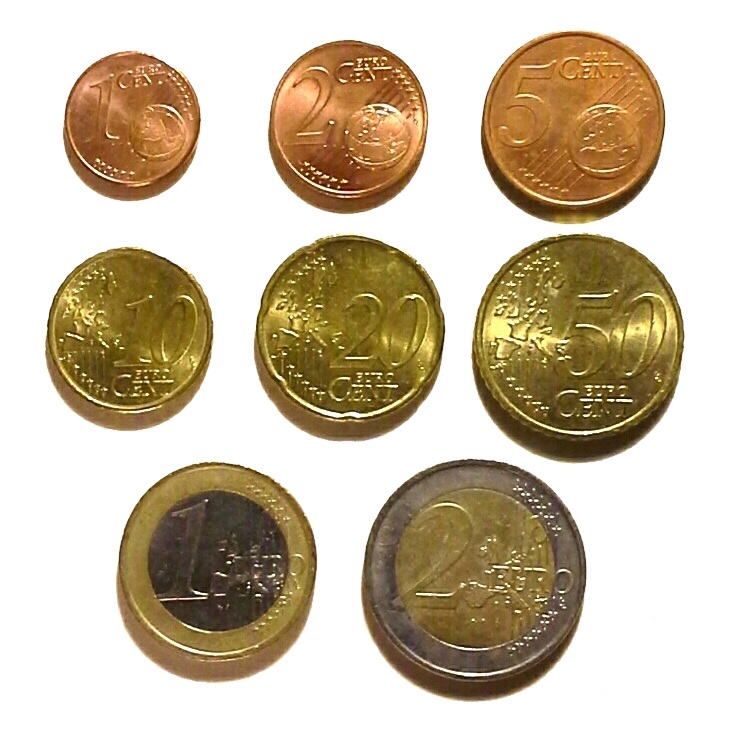 The euro (currency code: EUR, symbol: €) is the official currency of the European Union, used by 19 of the 27 member states (Austria, Belgium, Cyprus, Estonia, Finland, France, Greece, the Netherlands, Ireland, Latvia, Lithuania, Luxembourg, Malta, Germany, Italy, Portugal, Spain, Slovakia and Slovenia) and the institutions of the European Union jointly use it, they make up the eurozone. The euro is currently used by around 337 million people in the eurozone. The currency of six European countries outside the Eurozone: Andorra, Monaco, San Marino and the Vatican enclave dwarf states by treaty, Kosovo and Montenegro introduced it unofficially. It is also an unofficial currency in Zimbabwe, South Africa, which has not had an independent currency since 2009, but the euro is used in the country, along with several other currencies. 175 million people worldwide use currencies pegged to the euro, 150 million of them in Africa. Since its introduction, the euro has been the second most important reserve currency, as well as the second most traded currency behind the US dollar, and is also the world's largest currency in total value. If the eurozone is treated as a single whole, it is the second largest economy in the world. The name of the common currency was decided at the 1995 summit in Madrid. The euro was introduced on 1 January 1999 as a settlement currency, replacing the European currency unit on a 1:1 basis. Euro coins and euro banknotes entered circulation on 1 January 2002.

The euro is the main instrument of the EU's common economic and monetary policy (European Economic and Monetary Union). The economic policy goal of its introduction is to improve the functioning of the single market, to enforce the four freedoms, i.e. to facilitate the free movement of goods, people, services and capital. The introducing Member States regard it as one of the cornerstones of their general economic development. It promotes the development of the EU's internal market by facilitating traffic, increasing the comparability of prices, eliminating exchange costs and exchange rate risks. With the disappearance of different currencies, it is the basis for the integration of the capital market and effectively reduces the external inflationary pressure on European economies. The leading institution of the common economic and monetary policy is the European Central Bank (ECB). Its primary goal is to ensure price stability, i.e. to suppress inflation, to support sustainable economic growth, and overall anti-cyclical economic policy. The population of the Eurozone as of January 1, 2007 is 312.7 million and represents 22% of the world's GDP (gross domestic product), compared to 28% of the United States. Along with the US dollar, the British pound sterling and the Japanese yen, the euro is considered the latest leading world currency. In 2006, the euro ranked second behind the dollar among the world's reserve currencies. (The share of the USD in world reserves is 65.7%, the euro 25.2%, the British pound 4.2%, the Japanese yen 3.2%, the Swiss franc 0.2%.) The African currency community franc, the the Bulgarian leva, the Bosnian convertible mark, the Comorian franc, the Pacific currency community franc and the Cape Verdean escudo have a fixed exchange rate (with a constant exchange rate) to the euro. The majority of these previously pegged their exchange rates to the French franc, the German mark or the Portuguese escudo.

So far, the negative peak has occurred several times in March 2022, on March 7, more than 399 forints had to be paid for 1 euro. The exchange rate of the euro against the US dollar is that of 2002, ready