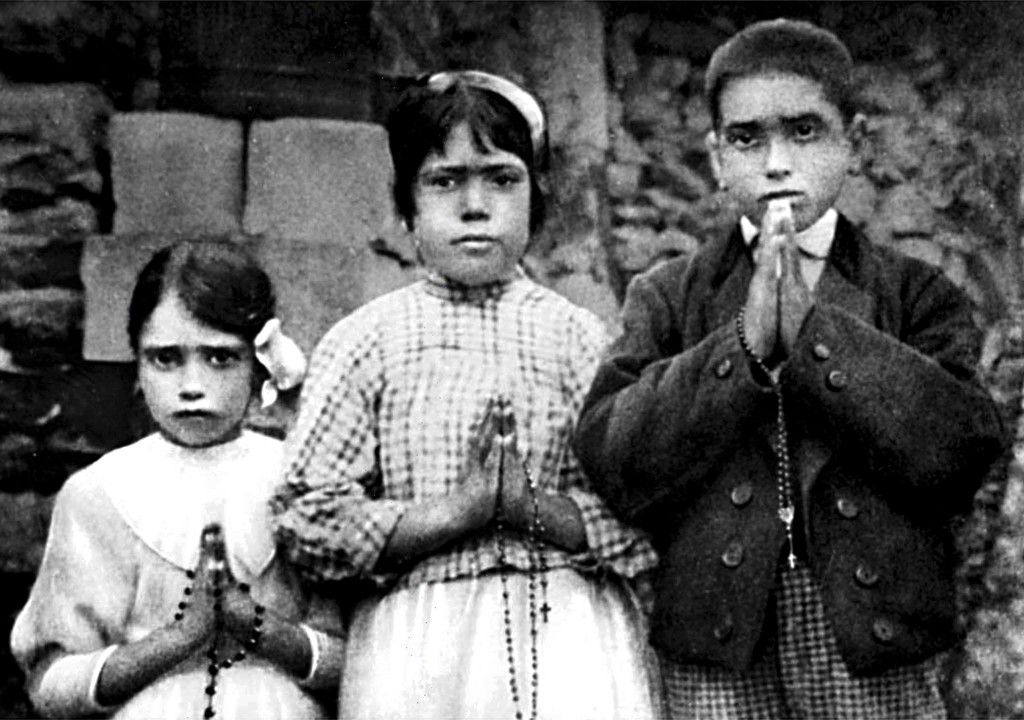 The apparitions in Fatima, six in number, took place in 1917 near the small Portuguese town of Fatima. According to the position adopted by the Roman Catholic Church, Our Lady did appear to the three pastoral children. The sixth apparition, the miracle of the sun, took place on October 13, 1917, and was seen by 30 to 70,000 people, depending on estimates. History of apparitions On May 13, 1917, three children guarded a small flock in a place called Cova da Iria near the small town of Fatima. The names of the children are Lúcia de Jesus dos Santos (then 10 years old, lived until 2005), nephew Francisco Marto (then 9 years old, lived until 1919), niece Jacinta Marto (then 7 years old, lived until 1920). After the southern rosary prayer, a small house was built from the stones near them on the site where the basilica stands today. Suddenly they saw a radiant light that was thought to be lightning. They decided to go home, but immediately a second lightning flashed the place a little farther down, and above a small oak bush — where the apparition chapel stands today — was seen a lady who was said to be brighter than the Sun and held a rosary in her hands. The lady told the three pastoral children that they had to pray a lot and invited them to come to Cova da Ireland again at the same time on the 13th day of five consecutive months. The children did so, and the lady came to them all five times.

During the July 13 apparition, Our Lady revealed three secrets to the children.

The Vision of Hell: “Our Lady showed a huge sea of ​​fire that was visible underground. Demons and souls in human form were submerged like burning, transparent pieces of coal, all blackened or glowing in bronze, floating in the fire, then rising into the sky with the help of flames that sprang from them, spewing smoke clouds, then surrounded us with painless, painless, painful they fell back in the middle. We were very terrified, trembling with fear. Demons could be distinguished from their frightening and repulsive resemblance to fearsome and unknown animals, both black and transparent. The vision seemed long, but it was momentary. How can we thank our beloved Heavenly Mother, who prepared us for the journey to Heaven with the instructions of her First Appearance. I think we would otherwise have died of fear and dread. ”

The second secret of Fatima

The second secret is the claim that World War I is coming to an end, but if they do not stop offending God, it predicts the coming of an even more terrible war (World War II). The second part asks Russia to offer Mary the Immaculate Heart: “You have seen Hell where the souls of the poor, sinners go. God wants to establish the honor of My Immaculate Heart on earth to save them. If they do what I tell you, many souls will escape and there will be peace. The war is coming to an end, but if people do not stop offending God, a worse one will break out in XI. Under the dignity of Pope Pius. If you see an unknown light one night, you know that it is the great sign from God that the punishment of the world for its many wickedness, with war, famine, persecution of the Church and the Holy Father, is approaching. To prevent this, I will come and ask Russia to offer my Immaculate Heart and the First Saturday Atonement. If my request is granted, Russia will repent and there will be peace; if not, it will spread its misconceptions throughout the world, causing wars and persecution of the Church. The good ones will be sacrificed; the Holy Father will suffer much; nations will perish. Finally Immaculate Heart