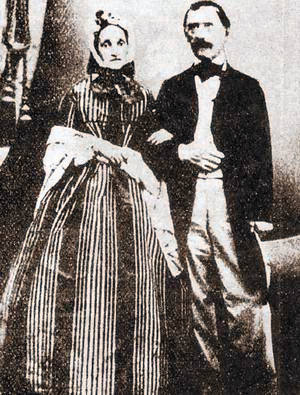 Jakob Christof Rad (Rheinfelden, March 25, 1799 - Vienna, October 13, 1871) is a sugar specialist, the inventor of sugar cubes. Career He was born in Rheinfelden, Switzerland, which at that time belonged to Austria; his father served in the Austrian military. After retiring from military service in 1804, the family moved to Vienna from 1808. Here Jakob Christof Rad studied commercials and worked in the “Schwarzer Hund” drugstore. Little is known about his youth, presumably he spent several years abroad. In 1835 he addressed the emperor in which he announced the invention of the optical telegraph. His invention was studied for three years, and in 1838 he was awarded three thousand imperial forints. He married Juliana Schill (1820–1883) in February 1840, and shortly afterwards, presumably through the intercession of his wife's family, was appointed director of the Daschitz (now Dačice) sugar factory in Moravia. Rad acquired new machines and ran the factory: their products were soon marketed in the Czech Republic, Vienna, Budapest and Lemberg. He also founded a new factory that produced chocolate, candied fruit and other sweets. On January 23, 1843, Rad obtained a five-year patent for the sugar cube press he had invented (previously sugar was marketed in the form of caps or liquid sugar), which was extended in 1848 for another five years. The six presses at the Daschitz plant, operated by 12 women, 11 men and 36 children, were capable of producing 1,120 kg of sugar cubes per day. However, consumers continued to prefer traditional cap-shaped sugar. In 1846 Rad and his family moved to Vienna, where he worked as secretary of the Chamber of Commerce until 1849, and for a short time as a salesman and manager of a food trade company. From 1849 he was placed in Trieste as a temporary supervisor of state telegraphs with the commission to build an experimental optical telegraph line between Istria and Dalmatia. The experiment ended in failure, and in 1853 the inventor was put to a choice: he was transferred to the state railway company or left the public service with severance pay of HUF 1,600. Rad followed the Königsfeld (now Královo Pole called Brno district); after that he probably worked in the sugar factories in Königsaal (now Zbraslav) and Líbeznice. He co-founded the Austrian Sugar Association (Verein für Rübenzucker-Industrie in Kaiserthum Österreich) and in 1855-56 was the Prague's secretary. From 1860 he became the head of the association's representative office in Vienna, and from 1863 he became its secretary general. From 1864 he edited the association's newspaper (Marktbericht des Vereins für die Rübenzucker-Industrie im Kaiserthum Österreich), which was the first magazine in the sugar industry in Austria. He has published extensively on the sugar industry, mainly in the fields of economics and taxation. In 1983, a monument to the sugar cubes (and not to its discoverer) was erected in Dačice. In 2009, a Czech company sells Juliana brand sugar; the packaging of the product is decorated with a picture of Juliana and Jakob Christof Rad.

The Rübenzucker is a national, economic, financial, industrial and land-based company, which is a subsidiary of the Austrian State and Germany. 1848 Colonization plans for Hungary, Transylvania, Slavonien, Galizien and die Bukowina. 1852 The Rübenzucker-Industrie in Österreich vom Standpunkte der Volkswirtschaft und Finanzpolitik. 1857 (without the author's name) Vorschlag zur Errichtung einer Centralraffinerie in Prague. 1858 Beleuchtung der Rübenbesteuerungsfrage. 1862 Colonial- or Rübenzucker, welcher of beiden verdient in Oesterr. größe